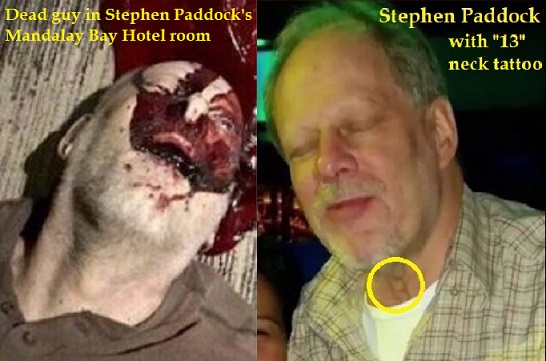 The term “false flag” has its origins in naval warfare where a flag other than the belligerent’s true battle flag is used as a ruse de guerre.

As the term is used in contemporary America, a false flag is an event that is contrived and manipulated by the authorities to achieve a covert agenda, e.g., gun control. The intended result is a “rallying around the flag” effect, wherein an inflamed “useful idiot” populace is mobilized to support the covert agenda. The public is given an untruthful version of the event by government and/or the media, whether it be about the perpetrator(s) and/or victim(s). That real people actually died or were injured doesn’t mean the event isn’t a false flag, so long as the event meets the two defining and necessary conditions for a false flag incident:

We are told that on Sunday night, Oct. 1, 2017, in Las Vegas, Nevada, 64-year-old retired accountant and multimillionaire Stephen Craig Paddock fired an automatic weapon from his room on the 32nd floor of the Mandalay Bay hotel at an outdoor Route 91 Harvest country western music concert across the street, killing 58 people and wounding more than 500.

If the Las Vegas shooting massacre was a false flag, it would mean there are people in government who could kill innocent people and inflict trauma on the American people to achieve their ends. That, in turn, means that our government is in the hands of people so diabolical, calling them psychopaths does not begin to describe what they are. That is a frightening thought.

But it is a thought not entirely alien to America’s Founding Fathers who fashioned a polity based on a view of human nature as inherently selfish, and of government as a necessary evil that must be constrained and delimited. To quote James Madison in The Federalist No. 51:

Even with checks and balances in place, the U.S. government is known to have undertaken and planned false flags. An example is the Gulf of Tonkin incident on August 4, 1964. We were told that without provocation, the North Vietnamese attacked the U.S.S. Maddox and U.S.S. Turner Joy destroyers. Congress took the bait and passed a joint resolution pre-approving military deployments without a declaration of war, thereby giving President Lyndon Johnson a free ticket to wage war in Vietnam. It turned out no Vietnamese boats were even in the gulf at the time of the alleged attack.

Then there was Operation Northwoods, a false flag of stunning scope, audacity and deviousness which was proposed in 1962 by the U.S. Joint Chiefs of Staff and approved by the head of every branch of the armed forces. Government operatives were to undertake acts of terrorism against U.S. military and civilian targets in Guantanamo Bay, Miami, other Florida cities, and even in Washington, D.C. Hostile acts including sinking U.S. ships, having fake Cuban MIGs attack a U. S. Air Force aircraft, hijacking and shooting down a chartered civil airliner, and gunning down civilians in the streets would be blamed on the Fidel Castro government, which would be used as pretexts for a “military intervention” against Cuba. Thankfully, President John F. Kennedy rejected the proposals. See “Operation Northwoods: A true U.S. government conspiracy for those who mock conspiracy theories“.

In the case of the 2017 Las Vegas shooting massacre, some question whether the FBI, part of the Deep State, had staged the shootings.

To begin, about 16 months before the shooting, in a report for Business Insideron June 9, 2016, news intern Caroline Simon sounded the alarm that “The FBI is ‘manufacturing terrorism cases’ on a greater scale than ever before“. She wrote:

The FBI has ramped up its use of sting operations in terrorism cases, dispatching undercover agents to pose as jihadists and ensnare Americans suspected of backing ISIS, aka the Islamic State, Daesh, or ISIL . . . .

In many cases, agents will seek out people who have somehow demonstrated radical views, and then coax them into plotting an act of terrorism — often providing weapons and money.Before the suspects can carry out their plans, though, they’re arrested.

But critics say that the FBI’s tactics serve to entrap only individuals who would never have committed any violence without the government’s instigation.

Stephen Downs, an attorney . . . said that the FBI often targets particularly vulnerable people, such as those with mental disabilities . . . who are genuinely psychotic, who are taking medication . . . .

On October 2, 2017, the morning after the night of the Las Vegas mass shooting, right on cue ISIS claimed responsibility for the shooting massacre. As reported by the New York Post, ISIS’s news agency Amaq said, “The Las Vegas attack was carried out by a soldier of the Islamic State” and that “The Las Vegas attacker converted to Islam a few months ago.”

On the same day as ISIS’s claim, FBI Special Agent in Charge Aaron Rouse saidat a news conference there is no evidence that Stephen Paddock was associated with any international militant group and that “We have determined at this point no connection to an international terrorist organization.”

The FBI’s alacrity in dismissing ISIS’s claim of responsibility was particularly impressive given the fact that the Bureau, at the time more than eight months into its investigation of Donald Trump’s alleged collusion with the Russians to sabotage the 2016 presidential election, still could not definitively tell the American people that the allegation is fictive.

Adding to the confusion, on the same day of ISIS’s claim of responsibility and the FBI’s quick dismissal of the claim, InfoWars reported that:

The Las Vegas shooter didn’t commit suicide as the mainstream media is reporting, but was killed by a FBI hostage rescue team who also found Antifa literature in his hotel room, according to a source linked to the team.

The FBI team took the suspect out after he opened fired on them, according to the source, and afterwards the team found photos taken in the Middle East of a woman linked to the suspect, 64-year-old Stephen Paddock.

Do these look like the same man to you?

Noting the fortuitous coincidence that “the mainstream media was already in Las Vegas to cover the OJ Simpson release right before the shooting occurred,” Infowars concluded that the possibility of the Las Vegas shooting being a false flag must now be considered.

Read the Rest at Fellowship of the Minds