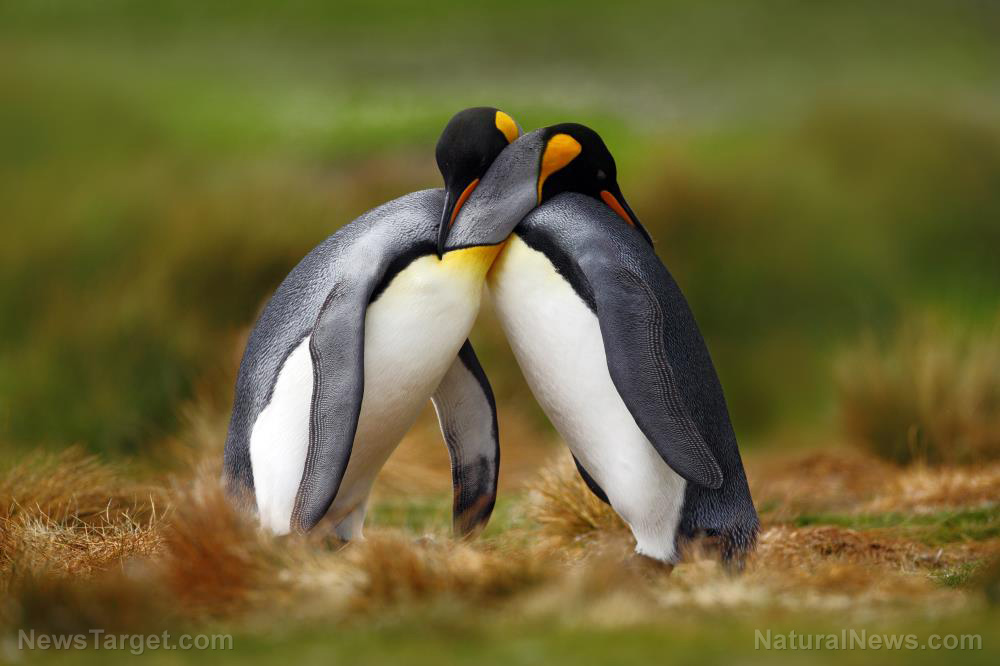 (Natural News) Penguins are undeniably interesting creatures, with their feather tuxedos and trademark waddle. Recently, gay penguins have been a subject of particular interest — especially now that these “couples” are being given their own eggs to care for. In Sydney, Australia, a pair of male Gentoo penguins named Magic and Sphenhave been applauded for “fostering” an egg. But is all this media mayhem about gay penguins really about the penguins, or is the liberal media using these animals to push their own agenda?

The gay penguin charade has captured the hearts of millions: Magic and Sphen reportedly “bonded” just before the 2018 mating season began. The pair were seen building their own nest, and as usual, humans were compelled to intervene. At first, they were given a”dummy egg” to practice on. Staff at the Sea Life Aquarium in Sydney were moved to eventually give Magic and Sphen a “foster” egg.

The egg in question was stolen from another, heterosexual pair of penguins. Staff say the “straight” penguins had laid two eggs, so they gave one to Magic and Sphen.

Earlier this year, another “gay” penguin pair stole a chick right from its parents’ nest in Denmark. The hatchling was returned, but keepers at the zoo went on to take an egg from a “single mom.” They said giving the gay couple their own egg was “for the best,”even though that meant stealing an egg from a female.

As for Magic and Sphen: Zookeepers are hopeful that by providing the penguins with an egg will encourage them to mate again next year. Tish Hannan, the aquarium’s penguin department supervisor, reportedly stated: “If they have a successful breeding season and raise a chick, next year they’re very likely to get back together again because they know that worked for them.”

In other words: Magic and Sphen may have paired up on their own, but it is human intervention that will ultimately keep them “together.” These people may think they are acting in the animals’ best interest by interfering and giving them a “foster baby” but the truth is that they are just manipulating the birds for their own gain by not allowing nature to take its course.

The science on gay penguins

Scientists have shown that while penguins may form fleeting homosexual relationships, they do not mate with same-sex partners long-term. These “relationships” always end — and when humans prolong the inevitable by providing homosexual penguins with eggs to nurture, they are doing penguins a great disservice.

A gay pair of penguins at Central Park Zoo in New York are a perfect example of this: Silo and Roy, both males, were encouraged to be “together” by their keepers, who even set them up to raise a chick together. Silo left Roy for a female after six years. After the crushing breakup, Roy was found sitting in a corner by himself, staring at a wall.

As a report from Daily Mail explains, scientists have had a few theories as to why males will mate together. One such theory is simply that penguins can’t always tell who is male and who is female. Another argument posits that males will “pair” together out of loneliness and a lack of females within their colony. High testosterone levels have also been considered as a factor.

In the flock of penguins studied, just 25 percent gave mating displays to same-sex partners, and only two “gay” birds “bonded.” Even then, the two males were later observed caring for eggs with female partners.

While the pairing of male penguins may be something for the media to marvel at, zookeepers are doing their animals a great disservice in the long-run by interfering with their relationships, instead of allowing nature to run its course. Indeed, it would seem these penguins are being used to serve the left-wing’s agenda. For similar stories, check out IdentityPolitics.news.