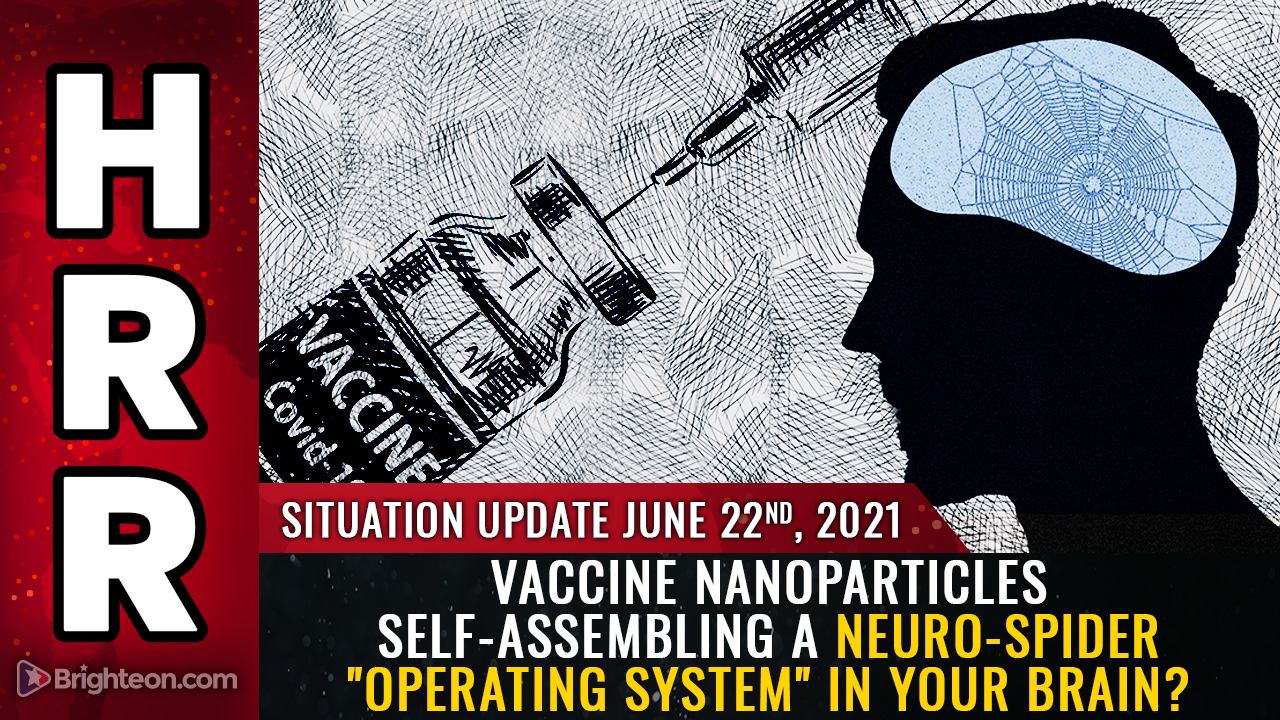 In addition, the last section of the podcast discusses the “what if” possibility that at least some covid vaccines may contain exotic technology that, once injected into the body, activates a self-assembly process to build a biocircuitry interface using elements from the victim’s own blood.

Although this sounds like science fiction, we seem to be living in a dystopian sci-fi scenario with biological weapons, magnetic nanoparticle “magnetofection” technology, Orwellian surveillance and all-out government propaganda to coerce everyone into taking a depopulation spike protein injection. (So don’t tell me ANY theory is “out there.” This is 2021. Global depopulation extermination is under way. Our entire reality is now “out there.”)

In addition, the Moderna company openly describes their vaccine injections as installing an “operating system,” which by definition means a platform to receive additional commands or instructions for execution. How are those commands received? From external electromagnetic waves?

Dr. Peter McCullogh has described vaccine-pushing doctors as being in a kind of mind-controlled trance. His exact words from a recent interview: (emphasis added)

What we have learned over time is that we could no longer communicate with government agencies. We actually couldn’t communicate with our propagandized colleagues in major medical centers, all of which appear to be under a spell, almost as if they’ve been hypnotized… Good doctors are doing unthinkable things like injecting biologically active messenger RNA that produces this pathogenic spike protein into pregnant women. I think when these doctors wake up from their trance, they’re going to be shocked to think what they’ve done to people…

Here’s the video where he states this:

What if it isn’t a spell or a trance but rather a self-assembled, embedded biocircuit that has taken control over their neurology?

What if some vaccines are simple spike protein bioweapons injections, but other vaccines are designed to place people in a kind of “trance” where elements of their neurology are controlled through external signals and commands?

The efficiency of delivery of DNA vaccines is often relatively low compared to protein vaccines. The use of superparamagnetic iron oxide nanoparticles (SPIONs) to deliver genes via magnetofection shows promise in improving the efficiency of gene delivery both in vitro and in vivo.

That same study reveals the only two elements necessary to create “SPIONS” (magnetic nanoparticles) are Iron and Oxygen, both present in human blood:

We describe the production of Fe3O4-based SPIONs with high magnetization values (70 emu/g) under 15 kOe of the applied magnetic field at room temperature… Polyethylenimine was chosen to modify the surface of SPIONs to assist the delivery of plasmid DNA into mammalian cells due to the polymer’s extensive buffering capacity through the “proton sponge” effect.

Although this isn’t the same as a self-assembling nanotech biocircuitry system, it hints at the existence of exotic technologies that are exploring such approaches to controlling neurology via external influences (such as electromagnetic fields).

If such technology exists and is being deployed right now, it would explain the seeming “hypnosis” or “trance” under which millions of people now seem to suffer as they continue to demand more bioweapons injections into children and pregnant women. Perhaps there is a simpler explanation, however. Perhaps today’s doctors are just brainwashed, gullible cowards who care nothing if they harm or kill billions of people as long as they don’t lose their lucrative medical salaries.

Will people ever wake up from this trance and realize they’ve become vaccine murderers? Nobody knows…