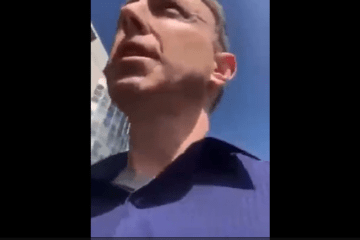 Dr. Christopher Rake, an anesthesiologist at UCLA, was escorted from the medical facility he worked at because he was “unvaccinated.” Rake produced a 1 minute video that is beginning to inspire people all over.

“This is what happens when you stand up for freedom, when you show up to work, willing to work, despite being unvaccinated,” Dr. Rake said.

He then pointed out that he was willing to “lose everything” and that is what the tyrants don’t want people to awaken to what they are doing.

One of the men escorting him out told him to stay away from him.

The International Business Times has more.

Dr. Christopher Rake, an anaesthesiologist at UCLA, prompted criticism from UCLA faculty and staff after a video of him speaking at an anti-vax rally in Santa Monica in a doctor’s coat went viral on social media.

“They want to force a vaccination or medication or treatment into my body that I don’t want. So they’re telling me, ‘Take the jab or we take your job.’ And I’m here to say no.” The anti-vaxxers ate it up, hooting with excitement,” Dr. Rake was heard telling the crowd.

For dramatic effect, as an aircraft flew over the rally, he held his hand up to the sky and yelled, “Wave for freedom! FREEDOM!”

The law is on Dr. Rake’s side. The “vaccine” mandate is unconstitutional and a violation of The Nuremberg Code, federal and state laws. California should have impeached and prosecuted Governor Gavin Newsom, not recalled him.