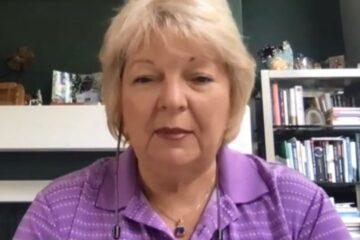 Dr. Sherri Tenpenny is a trusted doctor for several decades. She has been relentless during the CONvid-1984 is exposing what is in the shots and what we see occurring now and will see in the future. In a recent appearance on Tru News, Dr. Tenpenny spoke about the recent lawsuit filed due to a whistleblower’s claims of 45,000 people dying within 3 days of taking the shot and added that she had been contacted by a Pfizer whistleblower that claims to have documentation that 200,000 people have died inside of a week of receiving the deadly shot.

Dr. Tenpenny said, “I’m actually been talking to a whistleblower right now that’s yet to be named, who’s an insider at Pfizer, who called and was crying and said that 45,000 number I have documentation that and I haven’t seen it yet, so at this point in time, it’s still hearsay, that I’ve got documentation that that number is closer to 200,000 people that have died within a week or less of getting one of the shots.”

Consider that as the Food and Drug Administration continue to court the Nazis at Pfizer and other Big Pharma outlets that one of their own, the acting head of the unconstitutional agency approved both Oxycotin and Fentanyl, two of the most deadly drugs that are responsible for the opiod epidemic in the US.

TRENDING: Remember When George Soros said Facebook & Google Were “Obstacles To Innovation,” & A “Menace” To Society Whose “Days Are Numbered”?

Marianne Perez, who lost her daughter to oxycotin addiction and has been relentless in exposing the crime syndicate of Big Pharma reported:

Dr. Woodcock previously served as FDA’s deputy commissioner and chief medical officer. She also led CDER as director from 1994–2005. Woodcock’s tenure with the FDA coincides with that of David Kessler, MD, Commissioner who was featured on a recent CBS 60 Minutes expose wherein he admitted that Purdue Pharma’s highly addictive opioid, OxyContin was not approved for long-term chronic pain use. Here is the link to the CBS 60 Minutes broadcast.

Woodcock has been quoted as saying “I am continually challenged to make sure that FDA’s regulatory process remains the world’s gold standard for drug approval and safety.”

I encourage people who have lost family members to addiction and death under Dr. Woodcock’s reign of power to read a book entitled “Big Pharma, Big Greed – the inside story of one lawyer’s battle to stem the flood of dangerous medicines and protect public health” written by Stephen A. Sheller, Esq. One of the statements in Mr. Sheller’s book that should challenge Woodcock’s “gold standard for drug approval and safety” under her leadership is the following:

On the FDA’s role in the drug development process, Woodcock has likened the agency’s oversight to that of a building inspector saying “Someone else builds the building according to code. The FDA writes the code, and then comes in at the end and inspects the results to make sure they’re up to code.”

Mr. Sheller counters Dr. Woodcock’s analogy on the drug approval process by saying “In my view, the problem is the code is flawed from the start and the inspectors are in cahoots with the builder. One reason is the revolving door between the FDA and the pharmaceutical industry.”

Perez also cited a 2010 article that reported on Janet Woodcock’s being investigated as to her ties to Momentum Pharmaceutical, which was recently acquired by Johnson & Johnson, another criminal corporation that is has not only harmed the public via its carcinogenic baby powder and sunscreen, but is currently harming the public via it’s COVID shots.

It’s way past time that Woodcock not only be fired in her capacity at the unconstitutional FDA and the agency dissolved, but that she be arrested and brought to justice concerning her involvement in the approval of the instruments of the deaths of untold numbers of Americans.