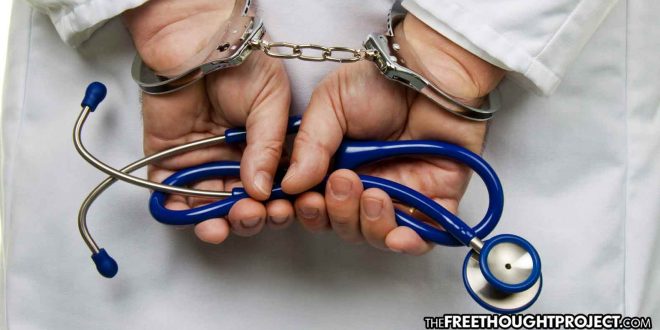 (RT) The US Department of Justice has announced charges for nearly 350 suspects in a sweeping bust linked to healthcare fraud. Among them are scores of medical professionals accused of scamming federal programs and private insurers.

The DOJ went public with the nationwide takedown on Wednesday, saying it had filed charges against 345 defendants across 51 federal districts, including more than 100 doctors, nurses and other healthcare workers.

“These defendants have been charged with submitting more than $6 billion in false and fraudulent claims to federal health care programs and private insurers,” the department said in a statement, noting that a flurry of different federal agencies took part in the investigation, led by the DOJ’s criminal division.

The lion’s share of the fraud was linked to “telemedicine” – in which doctors remotely diagnose and treat patients via phone or video chat. According to Department of Health and Human Services Deputy Inspector General Gary Cantrell, “bad actors” in the industry often use “aggressive marketing techniques” to mislead patients about their medical needs, and then “bill the government for illegitimate services” at exorbitant fees.

Some 86 suspects involved in the practice were slapped with charges across 19 districts, in some cases paying “illegal kickbacks and bribes” to medical companies that participated in the scheme. Others are accused of submitting false claims to Medicare and other government insurers.

More than a dozen defendants were indicted for making false claims related to drug rehabilitation centers, including physicians, facility owners and “patient recruiters” – or those paid to seek out drug addicts in order to enroll them into treatment clinics to keep the fraud scheme going. Many of the patients were subjected to “medically unnecessary” drug screenings, allowing treatment centers to bill insurers for thousands of dollars per test. They also charged for therapy sessions that never actually took place, while some of the doctors involved handed out unneeded medications, at times to “entice” patients to remain in treatment. Many of those patients were later shopped around to other clinics in exchange for illegal kickbacks.

Some doctors also provided illicit prescriptions for highly addictive opioid drugs – which include morphine, oxycodone and fentanyl – some 30 million doses of which were handed out by physicians without medical justification.

The DOJ alleged another $800 million in fraud in connection to other attempts to swindle Medicare and Medicaid, as well as other government and private insurance programs, indicting 240 additional suspects.

The massive fraud bust highlights a number of controversies surrounding the broader US healthcare apparatus, including the ongoing opioid epidemic – which has claimed some 450,000 lives in the US since 1999, according to the CDC – sky-high costs for medical care and health insurance, as well as overall poor management of the system.

While ‘Medicare for all’ continues to be a rallying cry for American progressives, who’ve called to expand the program designed for the elderly to all citizens, opponents of state-provided healthcare argue government intervention only raises costs and lowers quality, some pointing to the inflated premiums that resulted from the former president Barack Obama’s Affordable Care Act.