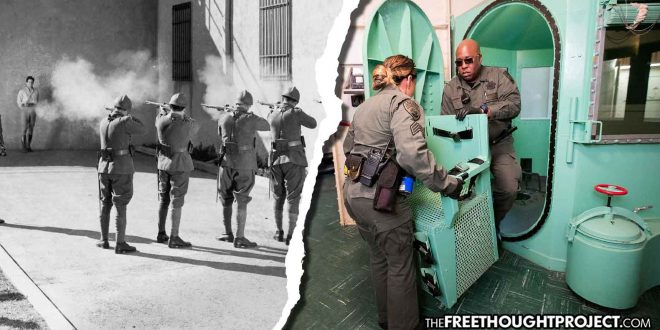 As the massive human experiment in tyranny, censorship, and fear — otherwise known as 2020 — comes to a close, it just wouldn’t be complete without some government agency exhuming the ghost of despotism’s past. In the cherry on top of the dumpster fire that is 2020, the Justice Department has quietly amended its execution protocols, no longer requiring federal death sentences to be carried out by lethal injection and clearing the way to use other methods like firing squads and poisonous gas.

This news comes on the heels of the fact that Attorney General William Barr restarted federal executions this year after a 17-year hiatus. Despite bipartisan resistance to this measure, the DOJ has executed more Americans in 2020 than they have in the previous five decades.

Apparently, the feds have put so many people to death this year that they are seemingly bored with their methodology and have moved to bring back gas chambers and death by firing squads.

Last month, with very little coverage in the media, the DOJ’s amended rule was published in the Federal Register that allows the U.S. government to conduct executions by lethal injection or use “any other manner prescribed by the law of the state in which the sentence was imposed.”

But fret not, Land of the Free, the changes were done in an ostensible effort to support state’s rights — or something like that.

According to the Associated Press, a Justice Department official — who asked to remain anonymous — said the change was made to account for the fact the Federal Death Penalty Act requires sentences be carried out in the “in the manner prescribed by the law of the state in which the sentence is imposed,” and some of those states use methods other than lethal injection.

The feds promise not to send convicts to gas chambers or firing squads unless the states allow it.

The official told the AP the federal government “will never execute an inmate by firing squad or electrocution unless the relevant state has itself authorized that method of execution.”

One of those states is Utah, whose Republican-controlled House voted 39-34 in 2015 to resurrect the use of Utah’s firing squads. Proponents of this method of state-sponsored murder claim that being shot to death by a group of marksmen is more humane than lethal injection.

To the contrary, the Washington, D.C.-based Death Penalty Information Center says that a firing squad is not a foolproof method because the inmate could move or shooters could miss the heart, causing a slower, more painful death.

One such case happened in Utah’s territorial days back in 1879 when a firing squad missed Wallace Wilkerson’s heart and it took him 27 minutes to die, according to newspaper accounts.

The real issue at hand, however, capital punishment, seems to be taking a back seat to all of this. For the state to claim the responsibility of justly ending life, it means that the state must never be wrong. Even the most ardent of statists will have to concede that an infallible state is but a terribly written fiction.

It is more important that innocence should be protected, than it is, that guilt be punished; for guilt and crimes are so frequent in this world, that all of them cannot be punished….

When the state is more concerned about how to go about punishing the guilty, than protecting innocence, we have achieved peak oligarchy.

The National Registry of Exonerations at the University of Michigan Law School reported that 2,696 falsely accused prisoners were exonerated since 1989. Some of these people were set to die at the hand of the state for their convictions.

It is no secret that prosecutors will seek the maximum punishment for the maximum charge, and their conviction percentages are in the upper 90’s.

Does that mean that these prosecutors are flawless machines hell bent on distributing some mythical immaculate justice? Or, does it actually mean that the entire system wishes more to hand out punishments, instead of seeking truth?

It is important to note that this is not a call for crimes to go unpunished, that would be irresponsible. However, the slaughter of innocence is a far more grave thought.

In a perfect system, irrefutable evidence would exist in every conviction. But as the constant flow of articles on this site about cops framing innocent people illustrates, this system is far from perfect.

Until we strive for a more perfect system, the manner in which death is dolled out by the hand of incompetence, is of no significance, other than tyrants pumping their chests about new ways to kill.