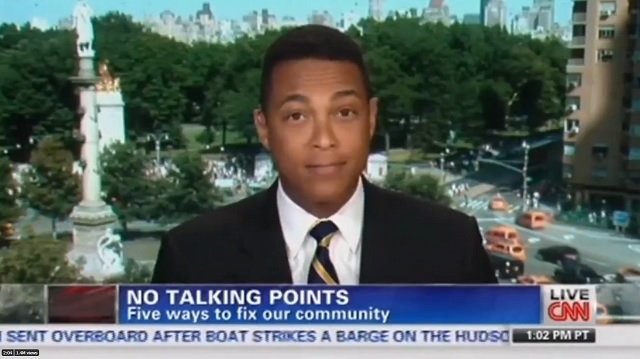 This newly-viral segment from Don Lemon’s show in 2013 really encapsulates how much the left has changed in just seven years.

In this clip which was shared Wednesday on social media, Lemon is seen telling African-Americans to “pull up your pants,” address the epidemic of black-on-black crime, reject gang culture, stop saying the “n-word,” start finishing school and stop having babies “just because you can.”

It is only edited for time (to fit Twitter’s 2:20 limit), but the context is unchanged.

The full video is in the link below.

I must admit: Don Lemon genuinely seemed to care about black lives in 2013https://t.co/XSf3nQua7o pic.twitter.com/kBFa6SPpH1

Lemon scolded Terry Crews for bringing up these issues just the other day:

Don Lemon says black lives don’t matter unless they’re being taken by cops and that you should start your own movement if you want to make black-on-black violence an issue. pic.twitter.com/NVHRc9rpO9

Tucker Carlson highlighted some of the segment on his show last night:

“If you’re running a channel like CNN, you want dumb people on TV because they’re compliant. They’ll say what they’re told.”
pic.twitter.com/ZDTMcYl7yV

Lemon has yet to respond.

If he ever does, I predict he will only half-apologize (if that) and say he had “internalized white supremacy.”