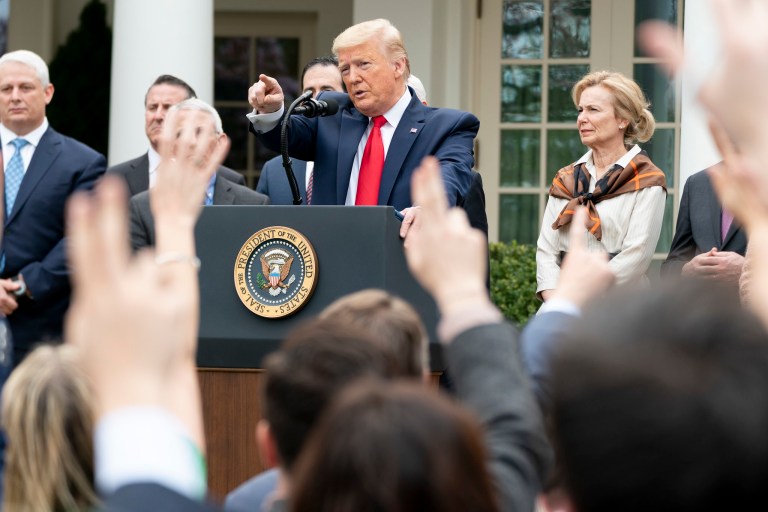 New York’s Democrat governor, Andrew Cuomo, responded with authoritarianism: He extended his current ‘stay at home’ order until May 15.

Okay, you say, that’s fine. New York, after all, was the epicenter of the coronavirus outbreak in the U.S. for a time, so that makes sense.

But does it? Cuomo has extended the stay-at-home order as the president presents a plan to reopen the country. Cuomo’s extension is for a month; with virus illnesses and deaths dropping rapidly, does he really need another month?

He apparently thinks so. And no doubt, other Democrat governors will feel the same, especially those in ‘hot spots.’
take our poll - story continues below

That’s up to them. In fact, as President Trump made clear during the presentation of his new recommendations Thursday, it will be up to governors and their mayors to decide when it’s best to reopen their economies.

Just like the president left the decisions to close down their cities and states to governors and mayors.

Recall that many governors made their decision to shut down even though the number of cases in their states was minuscule at the time (and has remained so).

Yet, now that the president has introduced guidelines to reopen, how many will actually do so in a timely manner? The guidelines make clear what the parameters for reopening are; they are clear, concise, specific.

And yet, we’re betting that a lot of mostly Democratic governors will do what Cuomo has just done so they can blame their economic troubles that they themselves incurred with their decisions to close down on the president.

In fact, the blame game as already begun.

On Thursday, House Speaker Nancy Pelosi (D-Calif.) pointed her bony, brittle fingers at the president for the current state of our economy…which governors themselves ruined with their shutdown decisions, as USA Features News reported:

During a question-and-answer session with reporters, Pelosi said she is negotiating with Republicans on new funding for small businesses after she and fellow Democrats ignored GOP pleas this week to put politics aside and pass clean legislation replenishing a fund for firms hurt by coronavirus-related closure orders issued by governors and mayors.

“The truth is, because of the incompetent reaction to this health crisis, the strong economy handed to Donald Trump is now a disaster, causing the suffering of countless Americans and endangering lives,” she said, adding that he was “weak” and “a poor leader who takes no responsibility.”

Uh, actually, the weak leadership has come from the Garbage Party, not the president or his party. The individual decisions to shut down the economy over a virus that was never going to become the planet-killer it was made out to be were made by governors and mayors, not the president.

And now he’s letting them decide when they want to reopen, making them responsible to their own citizens whose lives they have disrupted and are continuing to disrupt.

Democrats are going to try to change this narrative and blame their decisions on the president. Don’t let them.