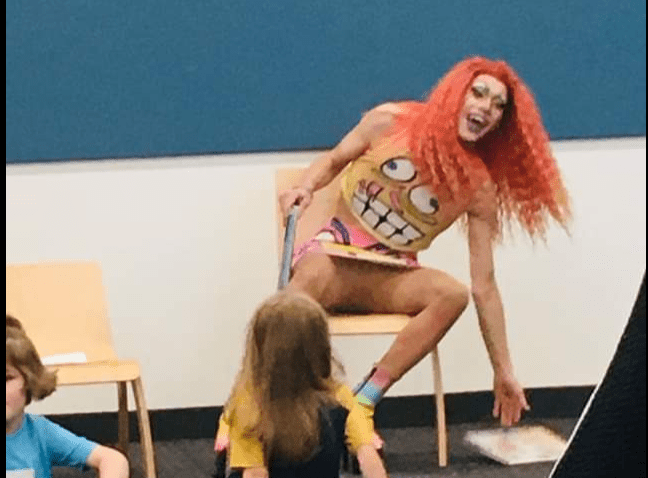 We recently reported on a Drag Queen doing a strip tease for some kids at a library reading in King County, Washington.

That was seemingly only the beginning…

…and somewhat minor compared to this.

To quote Pulpit and Pen’s photo caption, “Blurred for your protection. But if you’re wondering, that dude ain’t a lady.”

It appears that Pulpit and Pen broke the story on October 22, but it is only now hitting some other media outlets.

A “drag queen” has given children more than their parents bargained for when they sat their little ones in front of the man to learn something at their local library. What the children learned, they might not have been prepared for.

On October 17, the Hennepin County library invited “drag queens” (men with a mental illness, who believe that they are women or prefer to behave and/or dress like women) to indoctrinate children. Hennepin County is the largest county in Minnesota with a population of more than 1.15 million residents and is home to the city of Minneapolis.

The two drag queens went under the fake names “Sasha Sosa” and “Gemini Valentine,” who also perform as exotic dancers at adult nightclubs.

Child Protection League Action, a group whose focus is on protecting children from pedophiles and sexual predators, issued a warning to area libraries and issued a call to action for people to call the library and encourage them to cancel the sexual grooming sessions.

Activist Mommy picked up the story a few days later and added this:

It continues to be a deeply disturbing mystery that parents continue to willingly march their children down to the local library for the purposes of having a grown man dressed in the misogynist equivalent of blackface to read a story and perform for them.

Not only are drag queen storytime events absurd, immoral, and highly inappropriate for children at face value, they have been repeatedly proven to be dangerous venues for predators to sexually groom young children, all while library staff and parents lovingly affirm the whole thing in the name of “tolerance.”

Even after such events have turned out to feature convicted sex offenders and performers who allow children to lay on top of them, it seems no scandal is too disgusting to keep parents from bringing their children to these disgusting events.

Perhaps this one will.

According to a Facebook post from the Child Protection League (CPL), a pair of drag queens, using the stage names “Sasha Sosa” and “Gemini Valentine,” was invited to indoctrinate children story hours in branches of the Hennepin County Library in Hennepin County, Minnesota earlier this month.

In the post, CPL attached a damning, yet mercifully blurred photo in which “Sosa” apparently flashes his crotch to a room full of preschoolers at the Ridgedale Hennepin County Library on October 17th.

How on earth can any parent sit through such a thing without scooping up their child and fleeing from the scene? To say nothing of alerting authorities! If this man had flashed a child in the grocery store, he’d be in handcuffs, but because this took place in an “educational” environment, it is somehow acceptable to these sick people!

Read the Rest at Activist Mommy…

This is completely out of control America.

Remember when the Mayor of Atlanta overruled the local library system to host DQ Story Hour at City Hall?

The Drag Queens are at war with American culture and have been given free reign over our children.

If you support this nonsense, then you are part of the problem.

Drag Queens are starting to make sexual hints to our kids.

Convicted sex offenders are among their ranks.

Christian Pastors are being arrested to protect the Drag Queens.

This is a culture war that we can not lose.