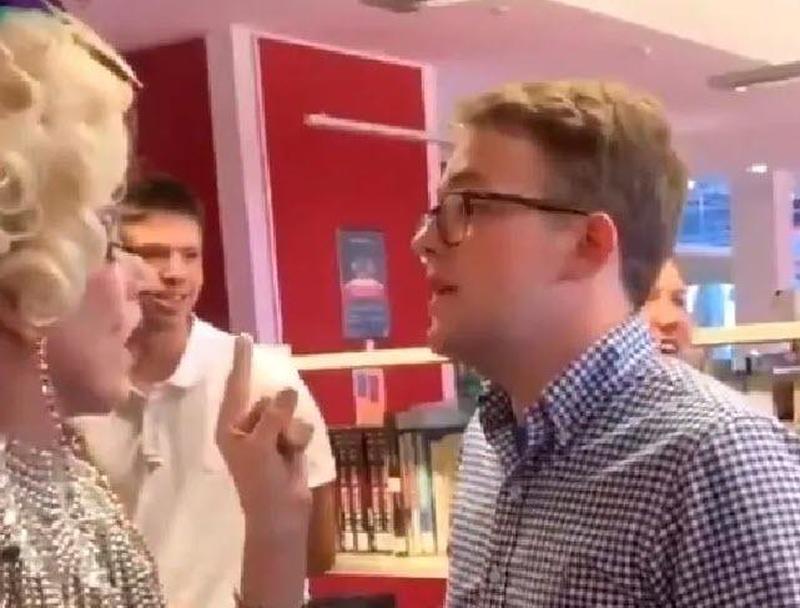 Authored by Robert Bridge via The Strategic Culture Foundation,

Following a protest against a ‘drag queen story time’ at a library in Australia, Wilson Gavin, 21, the president of the University of Queensland Liberal National Club, was found dead the next morning at a train station.

Local media, while going out its way to portray Gavin and his fellow protesters as hell-raisers, has yet to ask any serious questions with regards to the young man’s alleged suicide – at a time when he was reportedly house-sitting for a Liberal National Party Senator.

If ever there was a story that epitomizes exactly how low Western media has sunk, the story involving the events leading up to the tragic death of Wilson Gavin would have to rank very high.

On Sunday, Gavin and about fifteen members of the University of Queensland’s Liberal National Club (UQLNC) walked into the Brisbane Square Library where a ‘Drag Queen Story Hour’ event for children was in full swing. Gavin went face-to-face with the star of the show, drag queen Johnny Valkyrie, aka Queenie, as the group began to chant “drag queens are not for kids.” No violence, no broken chairs, just a group of university students expressing their displeasure with a controversial event that is sponsored by the local government, i.e. the taxpayers.

What happened next was as predictable as winter in Russia. Social media lit up with thousands of people providing their personal commentary on the incident. An extra big log was tossed on the fire as the popular Australian band, The Veronicas, shared footage of the incident on Instagram, with the smug remark, ‘bigotry is alive in Brisbane today.’

The New Zealand Herald described the social media backlash that ensued against Wilson Gavin by quoting a friend, who wished to remain anonymous (“out of fear of becoming a target” too, the paper explained): “Gavin was relentlessly trolled with vile insults and taunts, and … received some messages with an encouragement that he die.”

“Some members of his family, classmates and friends were tracked down and contacted, while his school, The University of Queensland, was publicly encouraged to kick him out.”

The between-the-line message here seems to be, ‘see what happens to people who protest too much?’

As the media went to great lengths to demonstrate the public wrath Gavin had incurred for daring to speak his mind at a library event (The Herald exhausted the bulk of its article discussing the “dangers of mob rule” on social media and “public shaming”), it failed to show the tremendous outpouring of support that he and his fellow students had received. The comments on social media were divided into two camps, which is normally the case involving any controversial subject. After all, millions of people are vigorously opposed to the idea of drag queens reading stories to children at public libraries, or at any other venue for that matter. Yet the media seriously downplayed that side of the debate, pushing the idea that “public shaming” led to Gavin’s decision to end his life. More on that later.

As current State patron of the UQ LN Club, I’m deeply saddened to hear of the death of Wilson Gavin. Wilson & his friends took a principled stand to protect children from inappropriate sexualisation & gender fluid ideology. For that he was treated terribly. Wilson, RIP!

Another particularly inexplicable aspect about the media coverage is that every single publication sympathized with the drag queens and their ‘storytelling’ to very young children, as if nothing could be more natural. What books were the queens reading from? We are never told, but somehow I doubt it was Jack and Jill, unless one or both of them had undergone a sex-change operation along the way. But I digress.

The main message the media strove to deliver was that the young protesters were mean brutes, intimidating the performers and frightening staff and children, as if the sight of well-dressed college students chanting a slogan was the worst possible thing that could happen to them. Meanwhile, there was zero discussion about the possible psychological effects a child may experience when confronted with drag queens, as well as their personal choice of fine literature. No discussion as to why there needs to be a Drag Queen Story Time for children – paid for out of the public purse – in the first place. No comments provided by respectable psychologists about the possible mental side effects these children could face down the road. Instead, the media pushed the ridiculous narrative that the families suffered the very worst ordeal.

ABC Australia, for example, interviewed Jenny Griffin, a mother of two children, ages 6 and 8, who commented, “I was worried, I was concerned for my kids’ safety,” she said. “This was their first introduction to this more violent homophobia.”

Valkyrie, aka Queenie, said, “There were children crying, families distressed and of course, [fellow drag queen] Diamond (whose full stage name is ‘Diamond Good-rim,’ a clear allusion to a sexual act that should be considered inappropriate for children) and I were victim to vilification, harassment and nuisance.”

After several minutes of publicly expressing their criticism, the Queensland students peacefully exited the building, escorted by a single security guard.

End of story? Unfortunately not.

Early the next morning, Wilson Gavin was found dead at a train station as the result of “critical injuries.” Within a matter of hours the media was calling his death a suicide. Before continuing, a few necessary words about Mr. Gavin.

Wilson Gavin, as president of the LNC at his university, courted controversy on numerous occasions in the course of his short life. At the age of 19, Gavin, and despite being homosexual, voiced his opposition to gay marriages by organizing a ‘You Can Say No’ rally and making several appearances on national television.

On another occasion, Gavin brilliantly defended the British monarchy on an episode of “Outsiders,” a political talk show.

“And there’s nothing more traditional in this country than the monarchy.”

.@Austmonarchist’s Wilson Gavin: I’m a lover of all things traditional, all things beautiful, and there’s nothing more traditional in this country than the monarchy. It’s a tremendous asset.

Judging by Gavin’s extremely confident demeanor in those past interviews, and at the library protest, he did not come across as a person who could be easily upset by hurtful remarks over social media. Indeed, just the opposite. He seemed to relish the opportunity to prove his detractors wrong. In short, he was a young intelligent man with a successful future ahead of him, and that fact may have unsettled his enemies. Although it is impossible to know what is going on inside of any person’s head, the fact that Gavin’s alleged suicide has shocked so many people is telling.

According to the Star Observer (“Setting Australia’s LGBTI agenda since 1979,” it declares in its masthead), “Gavin was found dead at Chelmer Railway Station this morning at 7:07am. Ambulance officers who attended say he died from critical injuries, but have provided no further details.”

On Thursday, The Guardian provided one short sentence regarding police accounts of the death: “Police did not treat his death as suspicious.”

In place of hard-hitting questions, the article provided the number for a suicide hotline as if the case was already closed. While a nice gesture that is not the sort of information the public needs from the media. Journalists need to be asking how a young man met his early demise at a train station in the wee hours of the morning following a protest that triggered a lot of controversy on social media. The public deserves to know more about the circumstances of the alleged suicide considering the context of events prior to that tragic moment Why is the possibility of foul play not mentioned – not even within the context to deny it, as if this were some sort of impossibility – as a matter of protocol in such a case?

One more note. As mentioned earlier, on the weekend of his death, Gavin had been minding the home of a politician, who has been identified as federal Liberal National Party Senator Paul Scarr, the Daily Mail Australia reported. Yet Liberal National politicians have said they have been disaffiliated from the UQLNC that Gavin headed since last month. Now, considering how media rarely shies away from sensational stories, the fact that it is not following up on this bit of information is, at the very least, strange.

Since the death of Wilson Gavin and the protest he organized, two petitions have been started on Brisbane City Council’s website to ban the Drag Queen Story Time events.