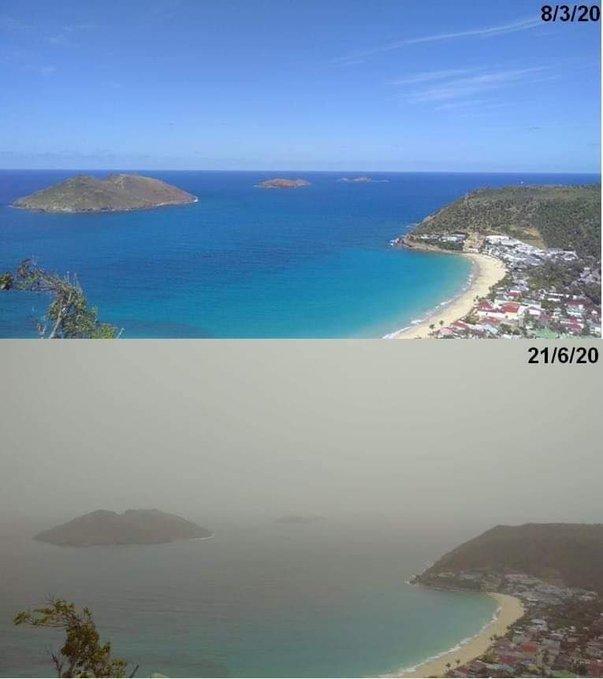 A massive dust storm from the Sahara desert in Northern Africa traversed above the tropical Atlantic Ocean and is causing havoc in the Caribbean region, is expected to move into the Gulf of Mexico and Southern US later this week, reported The Weather Channel.

The plume of dust originated from the deserts of Western Africa last weekend and has now traveled more than 3,000 miles across the Atlantic Ocean to the Caribbean Sea.

Before and after pictures show the dust-apocalypse unfolding across parts of the Caribbean.

Astronaut Doug Hurley tweeted a picture of the massive dust storm from low Earth orbit. He said, “We flew over this Saharan dust plume today in the west-central Atlantic. Amazing how large an area it covers!”

We flew over this Saharan dust plume today in the west central Atlantic. Amazing how large an area it covers! pic.twitter.com/JVGyo8LAXI

NOAA’s GOES satellite captured a stunning short clip on Friday of the dust storm over the Atlantic.

Here’s another view of the dust storm, still intact during most of the trans-Atlantic journey, entering the Caribbean on Sunday.

More before and after photos recently taken on Caribbean islands like Antigua, Puerto Rico, and Trinidad:

“Here is an amazing comparison with a near perfect day to today. Looking east over the #VCBirdAirport, #Antigua towards the Atlantic. You can barely see beyond 3 miles,” tweeted 268Weather.

The dust particles are expected to reach Texas and the rest of the Southern US by late week, creating hazy skies and potentially dangerous air to breathe.

This is super-interesting to me. We are in the middle of a huge dust storm here in Puerto Rico. The dust has traveled nearly 6,000 miles across the sea from the Sahara. pic.twitter.com/xbLUWcVxNA

Is America ready for the dust-apocalypse later this week?