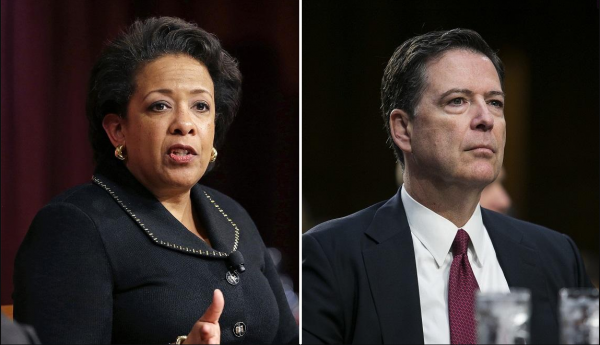 Editor: One of the best things about a Democrat scandal is watching the accused scramble to “eat their own.” In a perfect world it would be even better if we ever saw these things develop into results that were just. But usually the underlings fight it out to see who become the sacrificial lambs for their superiors. It would be great if they would all go down, including those giving the marching orders, but don’t bet on it. -Dean

Former Attorney General Loretta Lynch accused former FBI Director James Comey of lying about whether she told him to refer to the Hillary Clinton email investigation as a “matter” instead of an investigation in a September 2015 meeting.

While testifying last year at a closed-door House Oversight Committee hearing last June, Comey said Lynch had pressured him to minimize the significance of the Clinton email probe – an encounter which he says left him questioning her impartiality, and – along with Lynch’s clandestine tarmac meeting on a hot summer’s day in 2016 – contributed to his decision to hold a July 2016 press conference announcing the FBI’s conclusions.

“The attorney general had directed me not to call it an investigation, but instead to call it a matter, which confused me and concerned me,” said Comey. “That was one of the bricks in the load that led me to conclude, ‘I have to step away from the department if we’re to close this case credibly.’”

Lynch, meanwhile, told congressional the House Oversight and Judiciary committees on December 19: “I did not. I have never instructed a witness as to what to say specifically. Never have, never will.”

“I didn’t direct anyone to use specific phraseology. When the Director asked me how to best to handle that, I said: What I have been saying is we have received a referral and we are working on the matter, working on the issue, or we have all the resources we need to handle the matter, handle the issue. So that was the suggestion that I made to him,” Lynch added – telling lawmakers that she was “quite surprised” to hear how Comey would later describe the conversation “because that was not how it was conveyed to him, certainly not how it was intended.”

Today I’m releasing the remaining interview transcripts from @JudiciaryGOP’s investigation into decisions made at the Department of Justice and FBI. To read the transcripts, visit https://t.co/EcAYT7JPdA. pic.twitter.com/kYy9YKSIZI