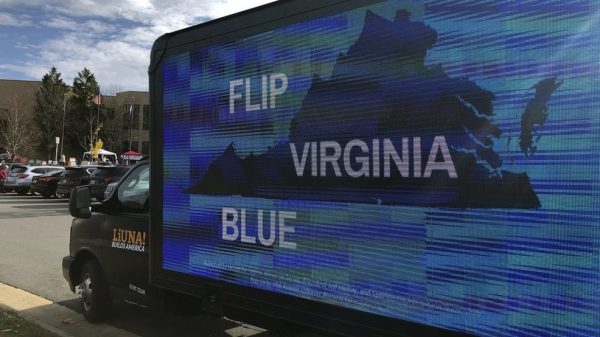 Non-White Democrats in Virginia Seek to Outlaw White Flight and Creation of White Suburbs and In Face of Democrat Party Tyranny, 90% of Virginia Counties Become 2nd Amendment/Gun ‘Sanctuaries’; These Counties Are Overwhelmingly White!

To the victor, goes the spoils.

Courtesy of demographic change (mass non-white legal immigration/refugee resettlement) and the monolithic black vote, Democrats are poised to take control of the every level of the Virginia state government. There is no time for pragmatic change once the white majority/conservatives have been dispossessed, for in the eyes of the Left, it is time to completely embarrass your vanquished opponent.

And now, Democrats, fresh off their electoral victory in November of 2019 (all courtesy of demographic change and the usurpation of white conservatives) feel emboldened to celebrate and spike the proverbial football with impunity. [Northam backs marijuana decriminalization, raising felony larceny threshold to $1,000, Richmond.com, January 4, 2019]:

Gov. Ralph Northam said Friday that he would throw his weight behind the decriminalization of marijuana in Virginia this year but said he wants to study full legalization before going further.

Northam announced legislation Friday that would make possession of small amounts of marijuana a civil offense carrying a $50 penalty, instead of a criminal misdemeanor.

The proposal is part of a broader “criminal justice reform agenda” that includes changes to the state’s parole system, a higher threshold for theft to be considered a felony, and an increase to the age at which a young offender can be tried as an adult from 14 to 16.

Seeking to further a key 2019 win by his administration, Northam proposes to permanently eliminate the automatic suspension of driver’s licenses for unpaid fines, fees and court costs. Lawmakers had backed the reinstatement of licenses for 627,000 Virginians last year; Northam is proposing to end the practice permanently.

“All Virginians deserve access to a fair and equitable criminal justice system,” Northam said Friday during an event at OAR Richmond, a nonprofit that helps rehabilitate people formerly incarcerated. “This is a bold step towards a more just and inclusive commonwealth.”

Easing the legal consequences for marijuana possession has for years been a goal of Democrats, who have been blocked by some Republicans in a formerly GOP-controlled legislature.

Northam and other Democrats have argued that enforcement is expensive as possession of the drug becomes widespread. They also say it disproportionately jails African Americans.

The measure might see some GOP support. Sen. Siobhan Dunnavant, R-Henrico, supports decriminalization and has expressed support for the use of medical cannabis.

Northam is proposing to do away with criminal prosecution for people arrested with up to a half-ounce of marijuana or about 14 grams. An average joint contains a third to a half of a gram, according to academic and federal estimates.

Northam is also backing legislation that would expunge the records of individuals who have been convicted for possessing up to a half-ounce of marijuana.

He also wants to end the suspension of driver’s licenses for drug crimes, and for driving off without paying for gas at a gas station.

On Friday, Northam stopped short of supporting legalization. During a gaggle with reporters, Northam pointed to his career as a pediatrician and said he has concerns about encouraging drug use among young people.

Northam added that he wants to understand how other states are grappling with and implementing legalization, and that he is backing legislation that would call for a formal review of the issue. He said that if a piece of legislation to legalize marijuana arrived at his desk for signature, he would consider it.

Advocates may find a supporter in Attorney General Mark Herring, who wrote in a recent opinion column that Virginia should “start moving toward legal and regulated adult use.” No bills have been filed to fully legalize the drug for recreational use.

Bill Farrar of the ACLU of Virginia said Friday that the state should go further, and “move past incremental discussions about decriminalization.”

“Leaving a civil fine in place will continue to allow police to use a purported odor to disproportionately stop people of color for searches or to charge them with other crimes,” he said in a statement. “There is no reason to wait any longer to simply strike simple possession from the criminal code.”

Northam on Friday also said he will support legislation to make it more difficult for theft to be classified as a felony. In 2018, lawmakers raised the threshold from $200 to $500, the first time it had been raised since 1980. Northam is proposing to double it to $1,000.

It’s a strategy states are moving toward as criminal justice reform advocates note that thresholds set in the 1980s and before have not been adjusted for inflation. Felony convictions, they argue, can hinder offenders from obtaining work, and accessing public housing and welfare.

A 2017 study from The Pew Charitable Trusts found that raising the threshold did not affect downward trends in property crime and theft rates in the 30 states that made the change between 2000 and 2012.

Northam’s criminal reform package also includes bills that would expand the number of people potentially eligible for parole. Virginia abolished parole in 1995, but people sentenced before that are still eligible.

Northam said he would support legislation that would allow people sentenced by jury between 1995 and 2000 to also be eligible, given a court ruling that found jurors were not told parole had been abolished.

Northam also wants people with terminal illnesses and who are permanently disabled to be eligible for parole.

Farrar, of the ACLU, said the governor’s package “touches upon many important aspects of badly needed” reforms, but “falls far short of what is needed.”

Farrar praised the move to permanently end the license suspensions, but said an increase in the theft felony threshold up to $1,500 would be more appropriate. He also said he questioned how the terminally ill and disabled might be cared for if released on parole.

With demographic change comes consequences. After all, democracy is a racial headcount.

As you run out of white conservatives, those who outvote you have no interest in preserving your past (remove all Confederate statues) or ensuring you have a future.

Hence the push for massive gun control in a state where gun crime is almost exclusively black… to disarm law-abiding whites.If your ideas weren’t able to win over the existing electorate, replace them via mass legal immigration/refugee resettlement…