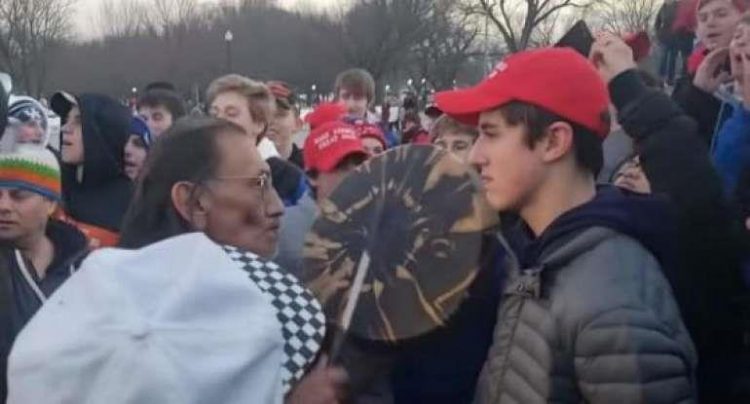 On the heels of a pretty huge win where CNN paid an undisclosed settlement to Nick Sandmann for slandering him last year, more lawsuits against journalists and other public figures for libeling the Covington Students on social media are being filed. This should be good and is very much needed!

Covington Catholic high school student Nicholas Sandmann has received an undisclosed settlement from CNN after the pro-abortion media outlet smeared him and a group of pro-life teens attending the March for Life.

The smears against the Covington Catholic High School students began after a heavily edited video surfaced of them face to face with liberal active Nathan Phillips after the March for Life in January. Longer footage of the incident later disproved many of the claims against the pro-life Kentucky students. However, the students and their families received death threats because of the accusations, and their school was forced to close several days because of security concerns.

Now, CNN has settled the lawsuit Sandmann filed against it. The amount of the settlement with CNN was not made public at a hearing in Covington, Kentucky but it sought $75 million for harm to Sandmann’s reputation and $200 million in punitive damages.

“The CNN accusations are totally and unequivocally false and CNN would have known them to be untrue had it undertaken any reasonable efforts to verify their accuracy before publication of its false and defamatory accusations,” the suit read.

“CNN was probably more vicious in its direct attacks on Nicholas than The Washington Post. And CNN goes into millions of individuals’ homes,” Lin Wood, one of Sandmann’s attorneys, told Fox News’s Mark Levin last year.

Now, several of the Covington boys are suing the likes of 2020 presidential contender Elizabeth Warren, Kathy Griffin and some journalists who lied about them.

The lawsuit targets Reza Aslan, the disgraced former CNN commentator who called Nick’s face “punchable” in a tweet that he finally deleted yesterday after getting served with the lawsuit. Aslan’s tweet from January 19, 2019 features the now viral image of Sandmann and asks his followers: “Have you ever seen a more punchable face than this kid’s?” Of course, Aslan deleted his tweet one year exactly after posting it. I guess he thinks out of sight out of mind, but forgets that the internet never forgets.

LOL now Reza Aslan deleted his Covington tweet. After all this time.

Or perhaps it was simply because he was served the suit by the attorney.

Apparently, Reza Aslan got served the suit I filed against him on behalf of #CovingtonBoys. https://t.co/lhgWTOeAeg

The lawsuit, provided to PJ Media and originally filed in August 2019, names a broad swath of media figures and politicians as defendants, including Ana Navarro, Sen. Elizabeth Warren (D-Mass.), Maggie Haberman, and Kathy Griffin. Barnes told PJ Media he believes Aslan was served this week, because his team was not able to find the author’s address until last week. According to the lawsuit, the tweet calling Sandmann’s face “punchable” further spread the false narrative that the Covington Catholic boys had aggressively insulted the Native American man, when that was not the case.

The lawsuit seeks justice for the defamation of nine anonymous Covington Catholic boys.

“False and Defamatory Accusations against the plaintiffs are defamatory per se, as they are libelous on their face without resort to additional facts, and as clearly demonstrated here, [the plaintiffs] were subjected to public hatred, contempt, scorn, obloquy, and shame,” the lawsuit argues. “The conduct of the plaintiffs, based on the false facts the defendants placed and circulated into the court of public opinion, led to these lifetime labels on these minors: ‘display of hate, disrespect and intolerance’; ‘heartbreaking’; ‘decency decayed’; ‘racist’; ‘cried for America’; ‘infamous’; ‘gall’; ‘shameful’; ‘darker chapters’; compared to genocide; ‘laughing and egging on’ ‘hurtful’ behavior; ‘awful’; ‘cavemen gestures’; ‘taunting’; ‘harassing’; ‘stalking’; ‘mocking’; ‘bullies’ who should be doxed, ‘named and shamed’, expelled from school, denied admission to college, be punched in the face, and their lives ruined.”

However, in an update to the story, Nick Sandmann and his attorneys are saying that Barnes does not represent Sandmann.

Both Sandmann and his attorneys, Lin Wood and Todd McMurtry, have attacked Barnes, arguing that Barnes is pretending to legally represent Sandmann. In his communications with PJ Media, Barnes made it clear that he was not representing Sandmann but only other Covington Catholic boys. The first paragraph in this article has been updated to reflect this.

“Robert Barnes keeps trying to suggest he represents [Nick Sandmann]. He does not. Barnes long ago blocked me, so I cannot ID him in this tweet,” McMurtry tweeted, sharing this article.

Sandmann addressed Barnes on Twitter asking, “would you like to explain why you’re suing for me without my permission? You’ve blocked my lawyers on twitter and now claim you’re suing over the Reza Aslan tweet? Retract and stop lying to the public.”

He included a screenshot of this article, writing, “Barnes can claim all he wants that he’s filed it on behalf of the covington kids but we both know that isn’t true. Reza’s tweet references only one kid, and i take up a majority of the picture. The article he even linked (now deleted) stated this … It clearly states it’s about me in the title!”

Yes. Barnes can claim all he wants that he’s filed it on behalf of the covington kids but we both know that isn’t true. Reza’s tweet references only one kid, and i take up a majority of the picture. The article he even linked (now deleted) stated this: pic.twitter.com/aK7DfV9zqE

And now, Sandmann’s attorneys are threatening legal action against Barnes!

Seriously, no wonder Jesus pronounced such judgment on “lawyers.”