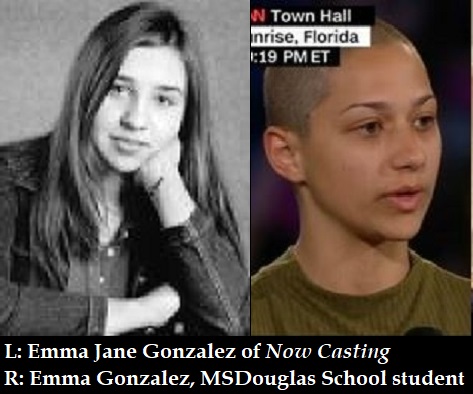 Reprinted. Last publication March 23, 2018. Note: We reprint articles to try to clean them up and keep history alive. We fix/restore what we can but missing videos, photos, and broken links are common.

Editor’s Note: Ever wonder if the Parkland shooting was a false flag? Many of us do. And by saying false flag we don’t always mean to imply that it didn’t happen, but that it might have happened for a reason. Emma Gonzalez was/is an actress. We couldn’t push this story quickly enough because social media shut it down. -Dean Garrison

On its website, Now Casting Inc. describes itself as “a premier online casting database used by industry professionals all over the globe,” which provides “services for the entire entertainment industry” and has “sent hundreds of thousands of auditions to casting directors, network executives, studio executives, producers”.

The website’s services include:

If you click “actors,” you’ll be taken to an “Actor Search” page, which says:

There are 361006 actors currently in our Now Casting database. All of them can be found with a name search. Please note they are still filling in their resume and other information. As that is completed, the more detailed searches will return a better result.

To find an actor, just type in his or her name in the box.

A reader of FOTM, Brian H., did just that, and found an actor named Emma Jane Gonzalez. I replicated what Brian did by typing “Emma” (first name) and “Gonzalez” (last name), which brought me to this page.

Below is a screenshot I took of the page, in case the website takes down Gonzalez’s entry. I painted the red arrow pointing to the date (3/22/2018) and time (7:22 AM) when I took the screenshot. (Editor Note: replacement screenshot, FOTM has moved hosts since this article was first published and I can not find the original)

I had written about actress Emma Jane Gonzalez before in “The curious case of Parkland school shooting student survivor Emma Gonzalez“, that:

For comparison, I then posted these side-by-side pics of Parkland student Emma Gonzalez and actress Emma Jane Gonzalez.

From the above side-by-side pics, my conclusion then was that the two women are not the same person, mainly because Emma Jane Gonzalez appears to have longer ear lobes, and a weak chin.

The pic of Emma Jane Gonzalez on Now Casting, however, casts doubt on my previous conclusion.

The previous pics of Gonzalez from the “Eat Our Feelings” video were in 2014, some four years ago. The Emma Jane Gonzalez of 2014 had a weak chin (aka “chinless wonder”), whereas the Emma Jane Gonzalez on Now Casting has a pointy chin like Parkland Emma Gonzalez. My guess is that sometime in the past 4 years, Emma Jane Gonzalez had a cosmetic surgery on her chin — a chin implant — just like Chelsea Clinton.