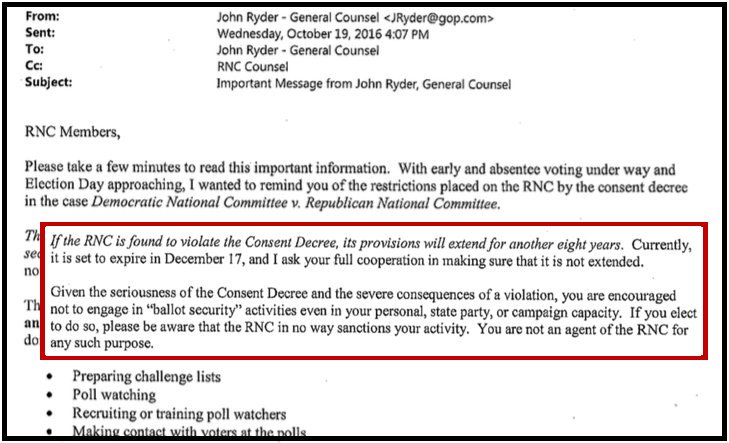 Just in time for this November’s mid-term elections!

Did you know that since 1982, the Republican Party had been legally prohibited from contesting elections due to suspected vote fraud, because of a legal agreement called the Consent Decree the GOP made with the Democrat Party?

Betcha you never heard or seen this truly momentous news in the Left-infested mainstream nedia. Why’s that?

As I explained in my post of November 15, 2012, “Why the GOP won’t challenge vote fraud,” in 1981, during the gubernatorial election in New Jersey (NJ), a lawsuit was brought against the Republican National Committee (RNC), the NJ Republican State Committee (RSC), and three individuals (John A. Kelly, Ronald Kaufman, and Alex Hurtado), accusing them of violating the Voting Rights Act of 1965 (VRA), 42 U.S.C. §§ 1971, 1973, and the Fourteenth and Fifteenth Amendments to the Constitution of the United States.

The lawsuit alleged that:

To settle the lawsuit, in 1982 — while Ronald Reagan was President (1981-1989) — the RNC and RSC entered into an agreement or Consent Decree, which is national in scope, limiting the RNC’s ability to engage or assist in voter fraud prevention unless the RNC obtains the court’s approval in advance.

The two parties agreed that “in the future, in all states and territories of the United States,” they would:

(d) refrain from giving any directions to or permitting their employees to campaign within restricted polling areas or tointerrogate prospective voters as to their qualifications to vote prior to their entry to a polling place;

The RNC also agreed that the RNC, its agents, servants, and employees would be bound by the Decree, “whether acting directly or indirectly through other party committees.”

In 1987, the Consent Decree was modified to define “ballot security activities” as “ballot integrity, ballot security or other efforts to prevent or remedy vote fraud.”

Since 1982, the Consent Decree had been renewed every year by the original judge, Carter appointee District Judge Dickinson R. Debevoise, who, even after he retired, returned every year for the sole purpose of renewing his 1982 order for another year. Debevoise died in August 2015.

Flash forward to December 1, 2017, when the Consent Decree was due to expire.

According to NJ.com, the Democrat Party tried to extend the Consent Decree, claiming that the 2016 Trump presidential campaign had colluded with the RNC in voter intimidation efforts, and that Trump’s commission to examine suspected Democratic voter fraud was, in the words of Sen. Cory Booker (D-NJ), “a thinly veiled voter suppression effort”.

But Sean Spicer, who had been a top RNC official before entering the Trump White House as spokesman, testified there was no collusion of the Trump campaign with the RNC, and that the RNC had stayed away from all 2016 election day activities, including any voter-intimidation, voter-suppression or ballot-security efforts. Nor did any party officials discuss voter fraud allegations with the Trump campaign. Spicer said:

“It had been abundantly clear for the six years that I worked at the RNC that the RNC and its employees were prohibited from engaging in Election Day activities, including poll watching, so I intentionally stayed away from all of that.

The [RNC] counsel’s office had been vigilant in informing both senior staff and subordinates on the importance of the consent decree and the activities that we were clearly should not be engaged at or be even perceived as engaging in. And so we had grown accustomed to not even coming too close to a line that would in any way, shape, or form lead one to believe that we were engaged in those activities.”

As reported by NJ.com on January 9, 2018, Judge Vazquez ruled that the Democratic National Committee did not prove that the RNC violated the Consent Decree prior to its Dec. 1, 2017, expiration date.

And with that, Judge Vazquez, an Obama appointee, ended that noxious 1982 Consent Decree legal agreement between the RNC and DNC which had tied the Republican Party’s hands from contesting elections and investigating vote fraud for 36 years.