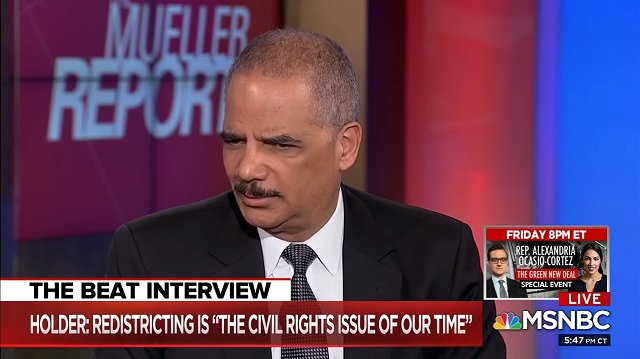 ARI MELBER: There’s a lot of talk about American being a leader as a democracy, quote unquote, in the 1800s when women and African-Americans couldn’t vote. What kind of democracy is that?

MELBER: Does that phrase echo as discrimination in your ears?

HOLDER: It takes us back to an American past that never in fact really existed, this notion of greatness. You know, America has done superb things, great things, and it has been a leader in a whole range of things, but we’re always a work in process. Looking back, “Make America Great Again” is inconsistent with who we are as Americans at our best where we look at the uncertain future, embrace it, and make it our own.

Note, Holder doesn’t associate at all with the old America.

Despite being a millionaire and working as the attorney general under our first black president, he sees our founders and the Americans who built the country in which he was able to thrive only as evil oppressors.

According to Holder’s definition of “greatness,” America was only “great” for the last few years Obama was in office.