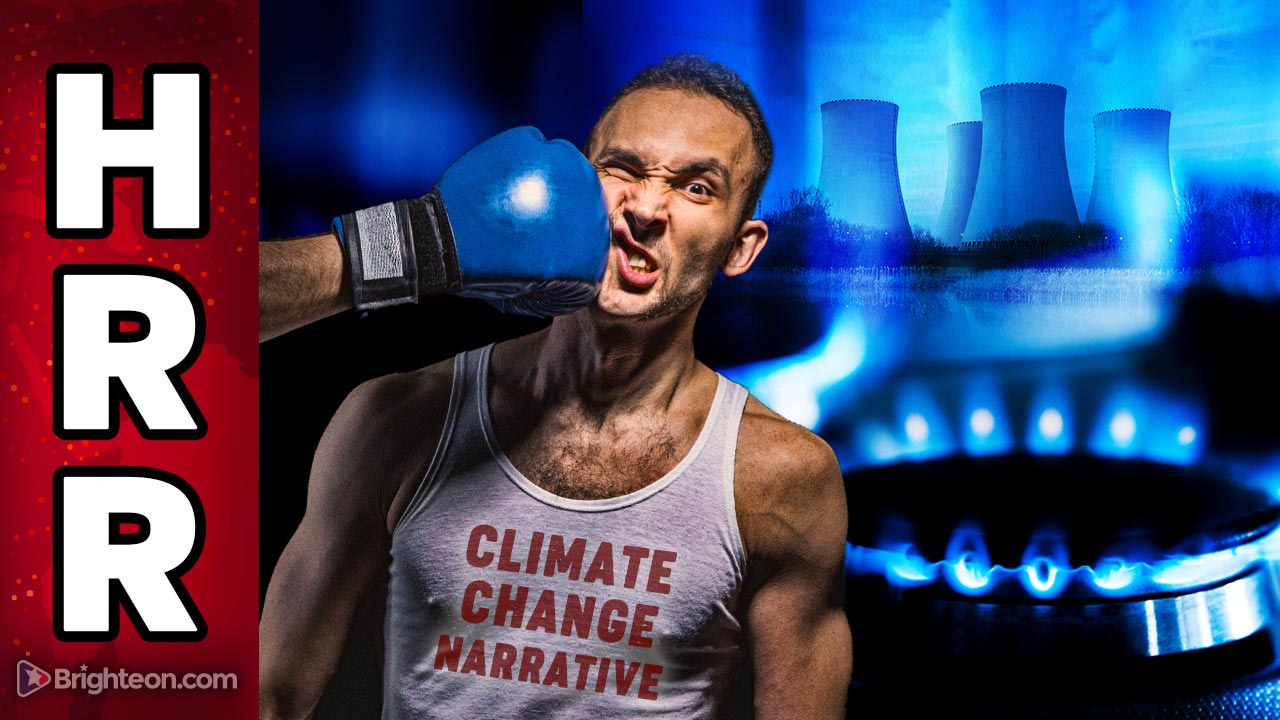 (Natural News) The EU parliament just announced a decision that’s causing the fraudulent climate change narrative to self-destruct. “EU parliament backs labeling gas and nuclear investments as green,” reads a Reuters headline from yesterday. “The European Parliament on Wednesday backed EU rules labeling investments in gas and nuclear power plants as climate-friendly,” Reuters continues, explaining that the EU has been plunged into an energy crisis that’s dividing EU nations and forcing a reevaluation on which energy sources are deemed “renewable.”

When this rule is fully adopted, it means Russia’s Putin will become one of the world’s largest exporters of green energy. That also means NATO and Ukraine are engaged in a war against a green energy leader, while western sanctions have blocked Russia’s exports of green energy.

“EU Parliament backs green label for nuclear and natural gas, defying climate Left,” reports the Washington Examiner. The decision will, “ease construction of infrastructure for those power sources over the objections of some environmentalists and members of the bloc.”

This decision is the first sign that European leaders may be pulling back from the green energy suicide cult that now typifies socialist, progressive “libtard” governments that are more interested in virtue signaling than allowing their own domestic economies to function. The fraudulent, junk science narrative of “climate change” has caused western nations (including the USA) to dismantle much of their fossil fuel infrastructure over the last 20 years. With Russia’s energy exports suddenly cut off due to economic sanctions, Western Europe is finding itself mired in an unprecedented energy crisis with potentially catastrophic consequences.

Suddenly, European nations are panicking to try to rebuild their energy infrastructure. But since they’ve officially blocked most funding for non-green energy projects, the only way to get funds to rebuild fossil fuel infrastructure is to declare fossil fuels to be “green.”

And that’s exactly what the EU parliament just did with natural gas, delivering a devastating blow to the climate change narrative, which was always based on so much quackery and bunk that I’ve called it “atmospheric transgenderism.” If men can get pregnant, then CO2 is a pollutant, you see. If you’re fabricating reality, then anything goes.

It turns out that even “progressive” national leaders of European nations are being dragged back to reality, kicking and screaming, reluctantly admitting that fossil energy is the only thing that can power modern economies at the moment, at least until hot fusion or cold fusion are commercialized.

Any time the greenies get put in charge, they destroy everything in sight: economies, industries and entire nations. The most obvious recent example is Sri Lanka, where the green movement pushed government leaders there to outright ban all synthetic fertilizers (nitrogen-based fertilizer made from natural gas, for example) in a move to go “organic.” This makes no sense, by the way, since organic agriculture should focus on avoiding GMOs and pesticides, not banning nitrogen fertilizers. There’s nothing wrong with using nitrogen-based fertilizer to grow organic food. In fact, organic crops absolutely need nitrogen fertilizer. Even in the USA, the USDA organic program does not prohibit the use of synthetic nitrogen fertilizers on organic crops. If they did, the organic food industry would not exist.

But the greenie globalists pushed the issue and Sri Lanka banned the fertilizer. This led to a catastrophic collapse in food production which has now led to the total collapse of Sri Lanka’s economy and government. The country is now in a state of lawless chaos and is headed to collapse into absolute ruin. As DailyCaller.com explains:

Environment Minister Mahinda Amaweera declared a government initiative to save the earth from “our own geoengineering misuse, greed and selfishness” in 2020 ahead of a forum on halving nitrogen waste. The move was part of Sri Lanka’s effort to pursue environmental, social and governance (ESG) goals; the country signed onto a green finance taxonomy with the International Finance Corporation in May that included a commitment to organic fertilizers.

The result was catastrophic. From DailyCaller:

Sri Lanka is in a last-ditch effort to stave off economic collapse after an allegedly climate-friendly ban on artificial fertilizers devastated one of the country’s largest industries, according to experts.

Sri Lanka has been wracked with poverty, inflation and fuel shortages on a massive scale, with the Prime Minister declaring Tuesday that the country has gone “bankrupt,” according to Business Insider. A ban on chemical fertilizers, implemented April 2021 in an effort to promote organic farming, proved the final straw after a string of missteps, decimating Sri Lanka’s primary source of income and forcing it into bankruptcy, experts told The Daily Caller News Foundation.

“Our economy has faced a complete collapse,” Prime Minister Ranil Wickremesinghe said on June 23, according to CNN.

The government lifted the fertilizer ban in November 2021, but the damage had already been done, Peter Earle, a former financial markets trader and economist at the American Institute for Economic Research, told TheDCNF.

“The decision to overnight shift away from synthetic fertilizers was an absolute disaster,” he said.

“Green” globalism is the enemy of humanity

Never forget that the “green” movement is part of the globalist depopulation agenda to starve billions of human beings to death while collapsing economies around the world. Food scarcity is being engineered on a global scale by outlawing ranch animals (The Netherlands), burning down food production facilities (the USA), halting oil exploration and regulating fuel refineries out of existence. It’s all being done under the label of “green” but what it really accomplishes is the total collapse of modern human civilization.

Sri Lanka is the canary in the coal mine of what’s coming for the world. What’s happening in Sri Lanka right now will be happening in many areas across Western Europe and the USA by early 2023 if we don’t urgently alter our course and restore the flow of food and energy.

But if we stay under the thumb of the Biden regime’s homosexual pervert authoritarians who despise freedom, farming and energy, America will go down the path of Sri Lanka and end in ruin. Remember, under the Biden regime, they think it’s far more important to have pervert child-grooming pedophiles in charge of government offices than to find someone who is competent and knows what they’re doing. Essentially, America is now being ruled by incompetent, economically illiterate, demon-infested “women with penises.” And the results are already catastrophic.