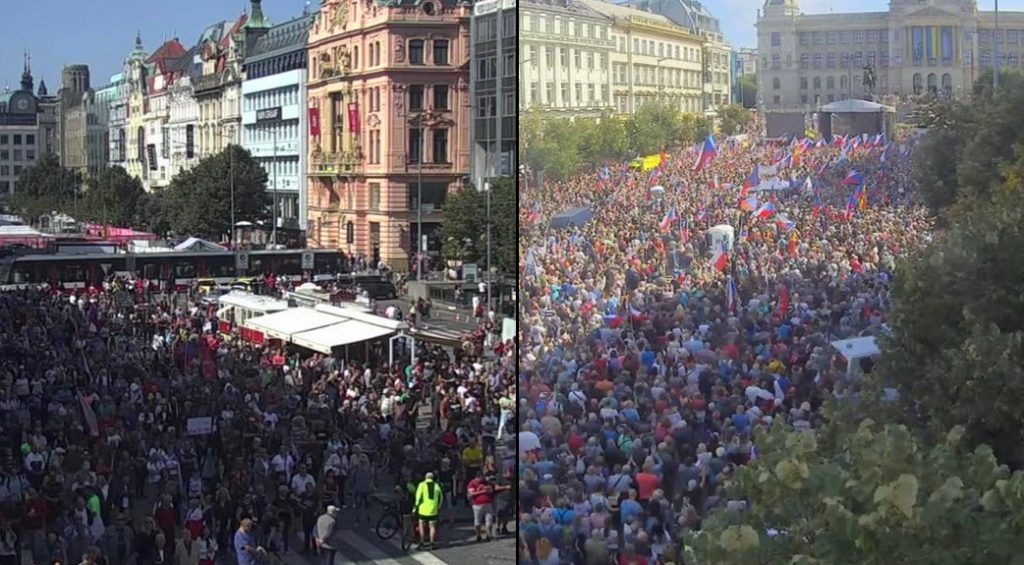 More than 70,000 Czechs are protesting in Prague, the capital, demanding the ruling coalition take a neutral stance on the Ukraine war to ensure energy supplies from Russia aren’t cut off ahead of winter. Protesters are outraged at the European Union for sanctions against Russia that have sparked soaring electricity bills and triggered a cost-of-living crisis.

“The aim of our demonstration is to demand change, mainly in solving the issue of energy prices, especially electricity and gas, which will destroy our economy this autumn,” event organizer Jiri Havel told local news iDNES and quoted by Reuters.

The protest, held at Wenceslas Square in the heart of the capital, comes one day after the Czech government survived a no-confidence vote over opposition claims of inaction to protect citizens against energy hyperinflation.

Emerging political instability shows how Europe’s energy crisis fuels discontent among households. We noted a new study Friday that warned civil unrest could flare up in parts of Europe over the next six months because of the deteriorating macro backdrop of high inflation.

Czechs are tired of Western sanctions on Russia that have sparked a devastating energy crisis. They want Czech interest first over the EU’s and demand cheap Russian gas and neutrality.

“The entire Wenceslas Square demands the resignation of the government! We will demand that the current cabinet, which is working against us, resign”: A 70,000-strong rally was held in Prague Also demand lower gas and electricity prices and neutrality on the conflict in Ukraine pic.twitter.com/dDGJb650yM

Smells like everybody is pissed off by NATO.
◾In Prague, 50 thousand people came to a rally: they demand that the authorities take a neutral position on the conflict in Ukraine

◾The rally that is taking place at these minutes is called "The Czech Republic first of all." pic.twitter.com/q9xF6Dm0bR

In Prague in 100,000 people for freedom. They require direct gas supplies from Russia and food and energy guarantees for the Czech Republic. They hold the EU solely responsible for the European economic disaster and the rise in energy bills. pic.twitter.com/3LlflMsJBZ

Europe is on the brink

Over 70000 people came out in support of Russia in Prague and are forcing the Govt to resign for supporting Ukraine pic.twitter.com/lwMAjkBM2U

🇨🇿"This is not our war" — anti-government rallies are taking place in Prague right now pic.twitter.com/3Ldy3rXz4A

Western sanctions are backfiring, and some Europeans are awakening to how their governments sacrificed their livelihoods for NATO’s proxy fight against Russia in Ukraine. What’s happening in Prague could spread like wildfire throughout the EU.