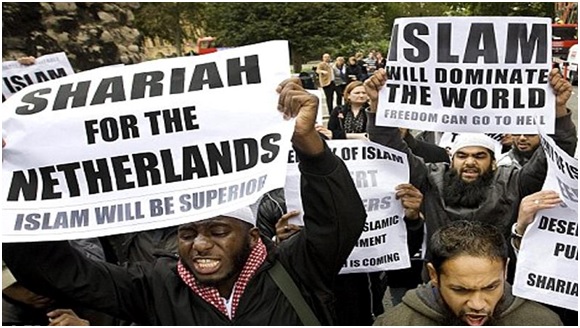 Some nations in Europe stand strong against the Muslim Invasion.

But it seems Europe is dying because of a growing culture of “political correctness.”

Here are some recent examples from European News Sources.

The European Commission announced last Thursday that it decided to send a letter of formal notice to Hungary concerning “the non-provision of food to persons awaiting return who are detained in the Hungarian transit zones at the border with Serbia”.

According to the Hungarian Helsinki Committee, a non-governmental human rights organisation, since August 2018, 27 people were deprived of food in these zones, which was only provided after an interim measure was issued by the European Court of Human Rights (ECtHR) urging authorities to do so.

The United Nation’s special rapporteur, the UN Refugee Agency and the European Commission have all criticised Hungary over this allegation.

The Hungarian government said these people were not detained and could have left the transit zone to get food in Serbia.

The Alan Kurdi is run by German charity Sea-Eye and is heading towards Lampedusa. It is currently travelling towards the Italian island and will arrive in the afternoon of August 1.

This rescue mission comes shortly after more than one-hundred migrants were allowed to disembark from a different boat in Sicily. But they were only able to do so after a new deal was reached with the European Union to distribute those on board between five EU nations.

The agreement was reached with Germany, France, Portugal, Luxembourg and Ireland. The number of migrants each country will take is yet to be decided.

Sea-Eye spokesperson Carlotta Weibl said migrant rescue boats had to “respond immediately to situations, as soon as there is an emergency at sea.”

“Political calculations should not play any role whatsoever,” she added. The closest port is on the Italian island of Lampedusa, Weibl said, and it was critical that migrants all be allowed to dock there “according to international law,” so that they could receive future treatment.

Italy called an end to its latest standoff with the EU over uncontrolled African immigration on Wednesday, saying it would allow an Italian coastguard ship to disembark 116 asylum seekers in southern Italy in coming hours.

There could be criminal consequences if a ship docks in their ports.

Kudos to Hungary and Italy for their tough stances against unwanted migrants.

The Dutch are also very tough and trying to hold the line on the Muslim Invasion, but their own authorities seem unwilling to enforce the laws.

Dutch Burka Ban Takes Effect But Few Will Enforce It…

Any garment that entirely hides the face including burqas and ski masks are from Thursday banned from Dutch public spaces but doubts remain over how the legislation will be enforced.

The rule, ratified last summer by the Senate, defines the ban as “partial” and not “total,” because it only limits the use of these garments in public areas such as schools, hospitals, public transportation and government buildings.

Although it was expected to take effect earlier this July, schools requested it be postponed so that its application did not complicate the end of the school year and cause tensions with mothers who use Islamic garments such as the burqa — which covers the entire face — or the niqab, which leaves the area around the eyes clear.

Can it be enforced?

However, there are still doubts over how it will be enforced in practice with those found in breach to be fined €150 as some people will continue to be allowed to cover their faces in public for health and safety reasons.

Furthermore, transport companies have already signalled they will not enforce the ban in order to prevent delays. Bus and train drivers are required to deny entry to any person whose face is hidden and are obliged to stay still until police arrive.

The police, meanwhile, after consultation with the government, said that they will not go “after a moving tram in which a person is breaking the law by covering their face.”

The Dutch Federation of University Medical Centres also rejected the implementation of the law over fears that women with burqas will avoid medical care if they are not allowed to enter the centres and warned that hospitals “should not take care of this task, which is the responsibility of the Police and the judiciary. “

A spokesman for the Dutch Ministry of Interior explained that they will continue talking with the competent authorities to discuss the implementation of the law and stressed that there are always doubts about how to force compliance of new rules.

Europe is in serious trouble and it is good to see a handful of nations taking a hard stance against the Muslim Invasion.

But, much like the USA, there are so many detractors that it is hard to enforce the laws they pass, as in the case of the Burka ban.

Here are some more articles you may have missed regarding the Muslim Invasion of Europe:

The whole world seems to have gone PC crazy and Muslim invaders are taking advantage.

It is good to see a few nations trying to fight back against the invasion.

We don’t want the drama here and Europe does not need it either but unfortunately, in most cases, has welcomed the invasion with open arms.