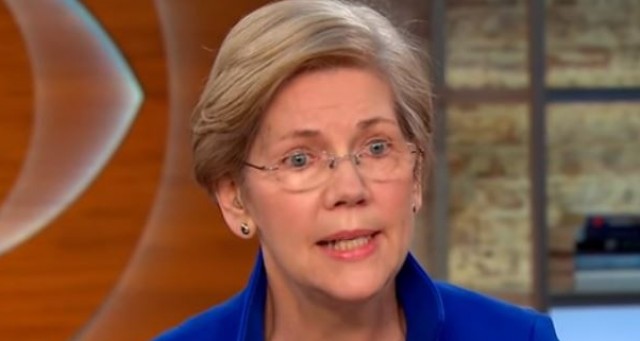 Uh-Oh: Even CBS News Is Calling Liz Warren Out Over ‘Miscalculating’ Her Wealth Tax On ‘The Rich’

(TNS) 2020 Democratic presidential contender Sen. Elizabeth Warren of Massachusetts is positioning herself as the ‘anti-Trump populist,’ stoking rage and envy against the wealthiest Americans, a class of people who are net job creators and economy builders.

She has claimed at her campaign events that such a tax will not simply make ‘the rich pay their fair share’ of the country’s income taxes, but that the tax will raise a significant amount of new revenue she, as president, could then redistribute to the masses in one federal program after another.

Only, she’s playing fast and loose with the numbers, as most socialist/populists do. And even CBS News has now called her out for it.

The network reported that overall, a massive new tax on the wealthiest earners would actually reduce federal tax income by a trillion bucks over the course of a decade, citing a recent study that looked at the real numbers.

Senator Elizabeth Warren’s plan to tax the fortunes of uber-wealthy Americans could generate $1 trillion less in revenue than she forecasts, according to a new analysis.

Warren has proposed imposing a 2% surcharge tax on wealth of $50 million or more, with the rate rising to 6% on billionaires. Her campaign estimates the tax would generate about $3.75 trillion in new revenue, which would be used to fund “Medicare for all” and other public programs.

Not so fast, according to the University of Pennsylvania’s Penn Wharton Budget Model. The nonpartisan research group says Warren’s wealth tax is likely to generate $2.7 trillion over a decade, or about $1 trillion less than she expects, partly due to tax avoidance by wealthy families. …

The analysis says a wealth tax could also crimp U.S. economic growth and hurt wages. By the Penn Wharton experts’ reckoning, the wealth tax would cause the economy to contract between 0.9% and 2.1% by 2050. Average wages could also slide, even affecting households not rich enough to qualify for the tax.

Why does the Left hate wealth so much? Well, they really don’t, as long as they are wealthy. It’s that inability to control others who have wealth (and freedom) that drive them crazy.

And remember, Democrats are hypocrites anyway. The “pay their fair share” argument is a ruse designed to win them converts and power; fact is, America’s wealthy already pay more than their ‘fair share’ of federal income taxes. In fact, that minority subset of America pays nearly all of them.

Looks like CBS News is backing a different Democrat horse in the presidential race.