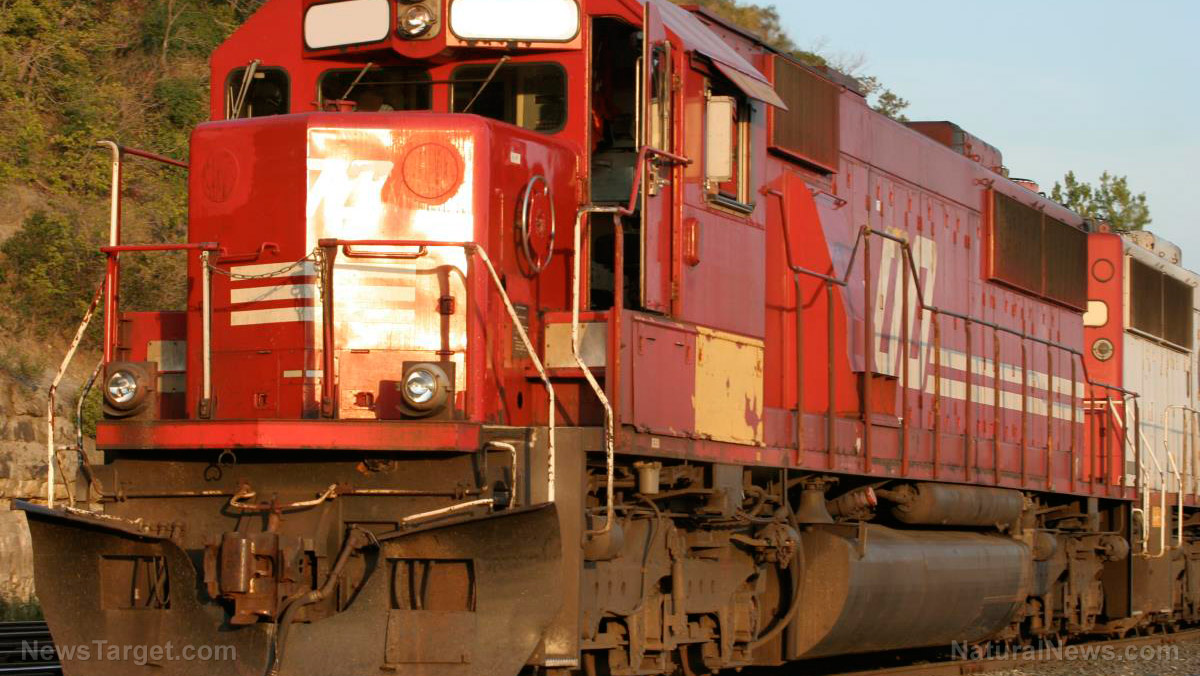 (Natural News) In yesterday’s article and podcast, I warned that the US supply of diesel engine oil faced a near-total wipeout in the next 8 weeks due to a supply chain shortage of chemical additives used to make diesel engine oil. The so-called “base oils” are not reportedly in short supply, but the chemical additives — rust inhibitors, anti-foaming agents, dispersing agents, etc. — have suffered extreme supply chain problems, leading to production shortages for the final oil product.

There are also shortages in packaging materials used to hold, transport and dispose of chemical additives. (See the full list below.)

As of right now, this critical supply chain shortage is being exclusively reported by Natural News. To our knowledge, no one in the corporate media has covered this issue, and even across the alt media, traction for this story has so far been minimal. As promised yesterday, we have been researching the supply chain for diesel engine oil additives, and today we present the results of that investigation.

As it turns out, the supply chain for diesel engine oil additives is in worse shape than we feared. See the list here, and feel free to re-post this list with credit to NaturalNews.com. Note that some of these Force Majeure declarations impact additive packaging and transportation (such as HDPE drums) as well as base oil feed stocks (such as light crude oil). Finally, realize that what we are showing here merely scratches the surface of the supply chain disruption affecting engine oil. There are no doubt dozens more examples of force majeure declarations that haven’t been made public or aren’t easy to find online. So take this list as a small sampling of what’s really happening.

tert-butyl acetate
– Used as an additive to gasoline to prevent engine knocking. It is also used as a solvent for lacquers.

ethylene glycol ether acetate
– These compounds have a positive effect on diesel fuel lubricity, and slightly decrease its viscosity

LyondellBasell Industries suffers another failure for a different chemical

LyondellBasell Industries has announced a force majeure supply limit on polypropylene resin made at its plant in Lake Charles, LA.

In a March 30 letter to customers, executives at Lyondale Basel in Houston said the firm had “experienced a mechanical failure of the gearbox” in Lake Charles. He said the equipment failure was “beyond our reasonable control” and would affect production of 32 grades of PP made on site.

Polypropylene is not directly used as an engine oil additive but is used in the packaging and handling of additives for engine oil.

In a letter to customers, Ineos Olefins & Polymers said it was declaring [Force Majeure] on its Polypropylene grades following a power outage at its Carson, California, facility, which caused a manufacturing breakdown and/or failures. The company also said it was diligently working to return production capacity to normal levels as quickly and safely as possible.

Ineos Olefins & Polymers said in a letter to customers that it experienced force majeure on all of its polyolefin products related to rail restrictions and expected to be required to limit rail transport to its best average daily rate. the following. Ineos added that it was committed to exploring all commercially reasonable alternatives to deliver products to its customers, but that the company’s deliveries would be greatly affected if restrictions worsen or extend beyond a few weeks. The force majeure polyolefin products include a 318,000-ton/year high-density polyethylene (HDPE) unit at Cedar Bayou, Texas; a 439,000-ton/year polypropylene (PP) unit at Chocolate Bayou, Texas. ) unit; 794,000 t/y high-density polyethylene (HDPE) unit at plant in Deer Park, Texas; 147,000 t/y polypropylene (PP) unit at Deer Park, Texas plant; California 230,000-ton/year polystyrene (PS) plant in Carson, Calif.

Polystyrene
Polystyrene dissolved in fatty acid methyl esters has a greater heating value as fuel, so that a reduction of the fuel consumption per output and the increase in the use of diesel and boiler cogeneration can be expected.

Americas Styrenics (AmSty), a major North American polystyrene (PS) producer, said on Tuesday that it is conducting a distribution process for its polystyrene products in light of recent production issues and supply chain challenges.

Americas Styrenics (AmSty) confirmed this in a letter to customers on Tuesday, saying it expects to reduce order volumes and limit availability through June. The company said the PS allocation was due to a prolonged reduction in styrene production due to unexpected operational issues at its St. James, Louisiana styrene monomer plant on April 27. Factory issues also led AmSty to declare force majeure on deliveries of its raw materials styrene and ethylbenzene.

TotalEnergies said in a letter to clients last Friday that it declared force majeure on North American PP products due to a shortage of additives needed to produce certain grades. The company added that its PP production will be curtailed until further notice and could not provide a timetable for normal production to resume.

Shell (SHEL.L) has issued a force majeure at its 300,000 barrel per day Scotford, Alberta, upgrader in western Canada after a unit at the facility tripped, a company spokesman said on Wednesday.

The plant, which processes oil sands bitumen into light synthetic crude, is also scheduled to start a 65-day maintenance turnaround this month, according to an investor presentation from Canadian Natural Resources Ltd (CNQ.TO), which owns a share of Scotford.

Two trading sources said Shell had cut March deliveries by approximately 20%. One of the sources said the force majeure had been issued last week, but the impact was muted because Scotford’s expected output for March had already been reduced by half because of the turnaround due to start next week.

ExxonMobil shutters Neftegas / Sakhalin-1 operations due to sanctions on Russia

Exxon Mobil said on Wednesday its Russian unit Exxon Neftegas has declared force majeure for its Sakhalin-1 operations due to sanctions on Russia that have made it increasingly difficult to ship crude to customers.

The Sakhalin 1 project produces Sokol crude oil off the coast of Sakhalin Island in Russia’s Far East, exporting about 273,000 barrels per day, mainly to South Korea, as well as other destinations including Japan, Australia, Thailand, and the US.

Exxon said on March 1 it would exit about $4 billion in assets and discontinue all its Russia operations, including Sakhalin 1, following Moscow’s invasion of Ukraine on Feb. 24.

“[Oil is] going to become the hottest commodity you’ve ever seen over the next couple of months. Anywhere from the next 4 weeks to 8 weeks, it’s going to go from scarcity to non-existent,” says the man in the video above.

My podcast from yesterday went into more detail about the ramifications of a collapse of diesel engine oil supply in North America:

I have since been able to confirm diesel engine oil rationing at a regional supplier in Texas (name withheld) that is telling customers they must limit deliveries due to lack of inventory.

In addition, Natural News contacted a large manufacturer and retailer of diesel engine oil additives, and they confirmed the existence of the supply chain / force majeure problems in a phone text exchange with a Natural News editor. (We are withholding their name because they did not seem interested in attracting attention.)

The most fascinating thing about this story is that very few people are willing to talk about it. It’s almost as if oil companies are feeling threatened by the illegitimate Biden regime and they are afraid to tell the truth about the coming collapse of diesel engine oil, fearing further punishment from Biden and the Democrats who simultaneously blame oil companies for higher gas prices while demanding oil companies product more fuel at a lower price.

The dangerous insanity of the Biden regime — and its irrational, absurd war on America’s energy infrastructure — likely explains why industry people feel intimidated into silence. But that only makes the problem worse because almost nobody knows what’s coming. Unless this diesel engine oil crisis is resolved soon, nearly all forms of transportation — trucks, trains, ships — will be sidelined before the end of this year, causing unthinkable levels of chaos as grocery stores don’t get stocked, coal doesn’t get delivered to power plants and even UPS and Fedex are forced to sharply reduce deliveries due to lack of engine oil.

A world without diesel engine oil is a collapsed, Mad Max world. It won’t be pretty. Yet pretending this problem doesn’t exist is not going to solve it.

In researching all this, we continue to wonder: Is anybody even trying to solve the diesel engine oil supply chain collapse? Or have we already crossed so deeply into the apathy stage of collapse that nobody cares?

It looks like we’ll soon find out. By our estimates, diesel engine oil should be hitting critical low levels of supply by early September, and that means trucks and trains will be sidelined from September through December, or until somebody finds a way to create the molecules needed for diesel engine oil.

And for those thinking we can just “go green,” you’re forgetting that electric vehicles are charged by coal, and the coal is delivered to power plants by train, and the trains run on diesel engines.

No diesel engines = No electric vehicles.

Somebody tell the greenies how this works, because they still haven’t figured out the basics. Without diesel engines, modern civilization collapses into a 19th century existence, with all the mass starvation, depopulation, lawlessness, chaos and revolutions that you might imagine would go along with such a scenario.

Listen to my podcast, interviews and raw intel reports for more information on this topic as it becomes available: