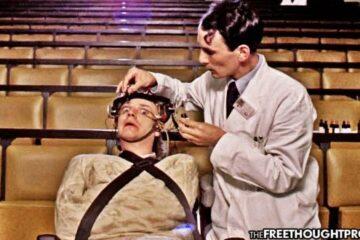 In 2016, after the horrifying attacks by extremists in Paris on Charlie Hebdo, the satirical magazine, on a Jewish supermarket, and on the Bataclan concert hall — which left 107 people dead — France made the decision to open reeducation camps. In these camps, alleged radicalized Islamists would “be taught their patriotic duties and forced to undergo psychological treatment in an attempt to counter jihadist indoctrination.”

The move was highly controversial and drew criticisms from human rights experts, including survivors of China’s reeducation camps for Uighurs. Though the criticisms were well-founded, the crimes of those they were trying to stop were well documented, and left a blood trail that shook the country to its core.

Fast-forward to 2021 and “experts” in the United Kingdom want to begin similar reeducation or “deradicalization” operations. This time, however, they aren’t trying to convert violent extremists responsible for the murder of over 100 people. This time, they are targeting those who refuse the vaccine.

The Independent interviewed one of these so-called experts who is advocating for “deradicalizing” folks who refuse the jab and his comments are certainly shocking.

Professor Stephan Lewandowsky, chair in cognitive psychology at the University of Bristol, thinks that those who refuse to take the jab are akin to batsh*t crazy tinfoil hat-wearing loons, who think Hilary Clinton is a lizard. Seriously.

“They’ll refuse anything – ‘I’m not going to wear a mask’, ‘I’m not going to get vaccinated’, ‘I don’t think climate change is happening’, ‘Covid is a hoax’, and, you know, ‘Hillary Clinton is actually a reptilian shapeshifter’,” he told the Independent, adding, “You’re getting to people who hold a cluster of very exotic beliefs – now, they’re very difficult to reach.”

Lewandowsky called this faction of folks who choose not to take the jab, “hardcore refuseniks” who cannot be reached through conventional means — so, they need to be treated like cult members or terrorists.

“In the ideal world, time and money permitting, you can engage even those people in a very slow, long-term process where you affirm their right to have those beliefs… rather than telling them something about themselves they don’t want to hear, let’s put it that way,” he said.

“So you tell them something positive, and then engage in what is effectively the same as a deradicalization process for former terrorists, or cult members.”

By this logic, Joe Rogan and others — who have had covid-19 and choose not to take the jab because they trust their natural immunity — are akin to terrorists or cult members.

“Because we’re really talking, when we get down to that small number of committed refusers, we’re talking about the psychology of cults and extremism, and it’s a very similar psychology.”

But is it really cult-like to not want to take a vaccine that was approved in record time for a disease that 99% of people survive? Let’s ask the prominent members of the Democratic Party what they thought last year?

Are all these folks in a cult? Were they spreading misinformation? The science never changed when one puppet left the white house and another entered, so why was there such hesitancy among the left before Biden was elected? Did these democrats need reeducation last year?

Obviously these are rhetorical questions but they are meant to make the point that hesitancy about a vaccine that was rushed to market in record time — is completely normal behavior. Even now, it is still acceptable to be skeptical as new information continues to roll out about the jab.

Yes, side effects are extremely rare, but as TFTP reported last week, they happen, and science knows they happen. Why claim someone is in a cult for acknowledging this?

Lewandowsky then went on in the interview to claim that Facebook and YouTube aren’t censoring enough information which allows these “cult member refuseniks” to “exist.”

“One of the reasons these hardcore refuseniks exist is because they can live in their own ecosystem of misinformation,” he said.

In multiple instances, however, those who are accused of spreading this “misinformation” have been censored into oblivion only to be proven right and vindicated months later as the establishment is forced to admit they were wrong.

What’s more, as we reported several weeks ago, the British Medical Journal published an incendiary report exposing faked data, blind trial failures, poorly trained vaccinators, and a slow follow-up on adverse reactions in the phase-three trial of Pfizer’s Covid jab. Is that not misinformation?

What about the CDC director stating that the vaccine is 100% effective? Or Fauci saying not to wear masks and then telling Americans to wear two masks before claiming that all three vaccines are 100% effective?

What about this week’s announcement that Pfizer may not disclose their vaccine data until the year 2096? Should we blindly trust a company who wants to keep their information secret about a product we put in our bodies — for the next 75 years?

With the constantly shifting goal posts that have been a staple of this pandemic, it is no wonder people are skeptical. It went from two weeks to flatten the curve, to mandatory masks, to two shots to get your freedom back, to a subscription model in which Pfizer is now advocating four shots. When does this end?

Perhaps the problem here isn’t the folks who remain skeptical. Perhaps, the real problem is the ever-changing, goal post-moving establishment, who continues to roll out ineffective dictates, mandates, and lockdowns, as they incessantly flout them, while demonizing anyone who questions their narrative…. Perhaps.