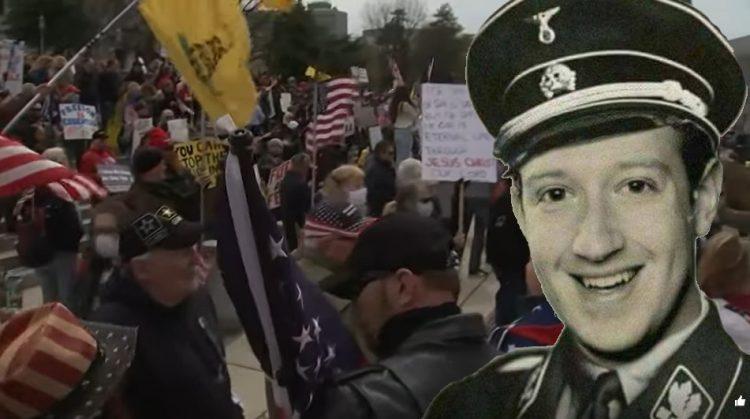 I think the united States and the world are clearly seeing who is on what side in the coronavirus hoax and tyranny. It’s not that we didn’t know about the corruption at Facebook, but it has gotten to the point that they are clearly violating the law as a corporation and platform to the point that they are eliminating voices of truth against the official government-approved narrative regarding COVID-19 and even attacking the people themselves by now banning protests against the lockdowns that are based on bad numbers, bad science and outright lies.

If you are wondering what I mean by the violation of law by Facebook, check out the interview below with Jason Fyk, who clearly points out the law and how Facebook is violating it.

There is no doubt that the latest actions by Facebook are coming from the top down, ie. Mark Zuckerberg.

Facebook will remove some posts on anti-stay-at-home protests being organized in California, New Jersey and Nebraska after consulting with officials in those states, a company spokesperson told CNN Monday.

Protests have erupted around the US in recent days as shutdown orders have been extended, just as record numbers of Americans lose their jobs.

Facebook has come under fire as groups organizing anti-stay-at-home protests have popped up all over the platform. Stone said Facebook would take down posts created through the Facebook Events feature that promote events in California, New Jersey and Nebraska. Other Facebook posts, including Facebook groups about the protests, might not be removed.

Additionally, the outlet reported that New Jersey Governor Phil Murphy, who obviously doesn’t consider your rights nor his oath to uphold the Constitution that was written to protect those rights, had been in communication with Facebook.

Alyana Alfaro Post, a spokesman said, “The governor’s office did not ask Facebook to remove pages or posts for events promoting lifting the provisions of the governor’s stay-at-home order.”

Now, how in the world can you trust anyone in the office of the top elected representative in the state who doesn’t think about the law when he demands people stay out home and fines and jails people who don’t obey his lawlessness?

Of course, Facebook is playing the little fascist role of public-private partnerships and working with governments to ban protests if those protests are within the Constitutional protections, but not under the policies of tyrants in government.

“Unless government prohibits the event during this time, we allow it to be organized on Facebook,” Stone said. “For this same reason, events that defy government’s guidance on social distancing aren’t allowed on Facebook.”

This is none of Facebook’s business! Protests are a right protected under the First Amendment!

This is one of many reasons The Sons of Liberty is pursuing a lawsuit against Facebook.

And they are not the only ones.

Governors, representatives and Facebook better start getting a grip because the people have had it with their tyranny, and we’re not going to be silenced.