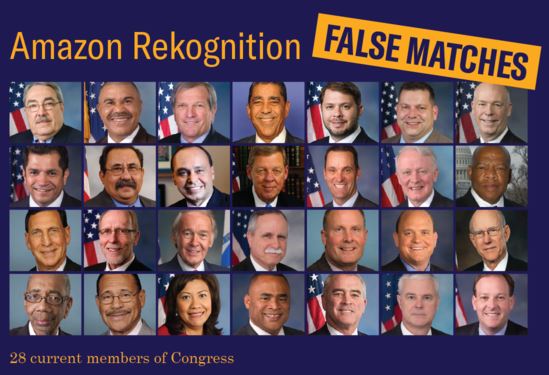 Facial recognition software analyzes images of human faces for the purpose of identifying them. Unlike many other biometric systems, facial recognition can be used for general surveillance in combination with public video cameras, and it can be used in a passive way that doesn’t require the knowledge, consent, or participation of the subject.

Amazon is aggressively marketing its “Rekognition” facial recognition software to police, claiming that Rekognition can identify up to 100 faces in a single image, track people in real time through surveillance cameras, and scan footage from body cameras.

According to the ACLU:

Academic research has also already shown that face recognition is less accurate for darker-skinned faces and women. Our results validate this concern: Nearly 40 percent of Rekognition’s false matches in our test were of people of color, even though they make up only 20 percent of Congress.

More recently, as reported by the Los Angeles Times on August 13, 2019, the ACLU discovered that Rekognition incorrectly identified 26 California legislators as criminals.