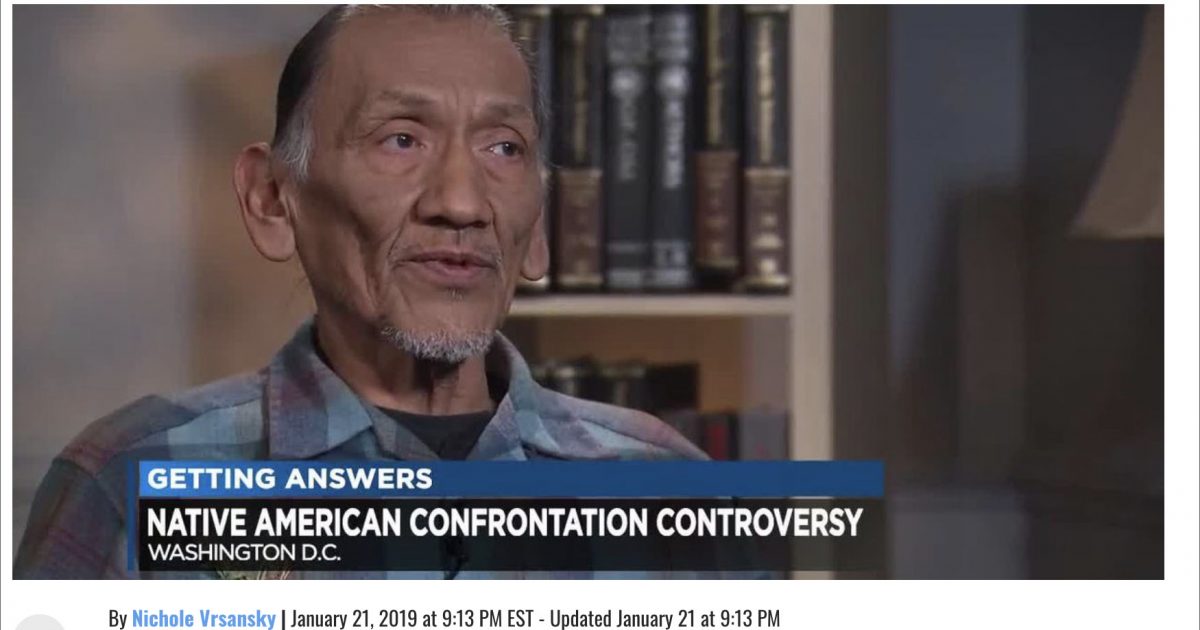 The entire MAGA hat fiasco has been just that, but as usual, the media has pedaled lies in the middle of it to divide the people. One of those lies was that Native American activist Nathan Phillips was a Vietnam veteran. He wasn’t, and the Washington Post quietly admitted it in a correction near the end of their story.

Phillips was not a Vietnam veteran. He never served in Vietnam, but he was a US Marine during that time.

“Correction: Earlier versions of this story incorrectly said that Native American activist Nathan Phillips fought in the Vietnam War. Phillips served in the U.S. Marines from 1972 to 1976 but was never deployed to Vietnam.”

As for Phillips, he referred to himself as a “Vietnam times veteran,” which has been held to be historically accurate as he did serve during the time of the war.

Here are just some of the media’s lies.

Of course, this was not the only lie being told by the media in the process.

As Matt Agorist pointed out:

When watching the entire video, it is clear that this kid never approached Phillips, never said anything derogatory, never did so much as raise a finger, but for standing there as Phillips beat his drum, he is painted as a product of a “hate factory” and a member of the Ku Klux Klan by the media.

As stated above, it was creepy to just stare at Phillips as he beat his drum, but remember, this is a kid who has never been in any situation remotely close to what he’s seeing. He was confused and afraid of what was going on. So, why would the media ignore the actual threats of violence and hateful rhetoric and focus on some socially awkward kid in the wrong place at the wrong time?

The easy answer to that question is because this kid had on a MAGA hat which made targeting him acceptable and fair game. Because Trump is an easy target for all media and essentially any insult or threat against him is acceptable, by proxy, this kid was also fair game. Had he worn a Clinton hat, this story would’ve likely played out differently.

In a followup article, Agorist would go on to point out how the media uses instances like this to divide the people.

The mainstream media, who is devoted to stoking hatred and divide among Americans is likely seething with vitriolic pride in the horrific hate storm they whipped up by pitting white Trump supporters against Native Americans and their supporters.

As stated yesterday, what this case illustrates is the media’s power to manipulate outrage among those who blindly consume it. By failing to tell the entire story, preconceived stereotypes are used to stoke a divisive picture that is destined to get clicks and views.

Society’s own biases are being used against us to sell false hatred and it’s making these companies billions of dollars.