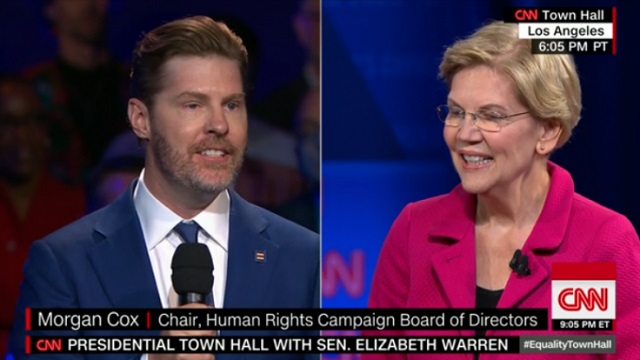 CNN failed to disclose that the questioner who teed up Elizabeth Warren for her zinger of the night at their LGBT town hall last week “donated the federal maximum to her 2018 Massachusetts Senate campaign,” The Washington Free Beacon reports.

CNN’s Chris Cuomo introduced Morgan Cox at the Thursday town hall as “the chair of the Human Rights Campaign board of directors” who was part of “a real estate investment firm in Dallas, Texas.” Cox asked Warren what she would say if “a supporter approaches you and says, ‘Senator, I’m old-fashioned and my faith teaches me that marriage is between one man and one woman.'”

“Well, I’m going to assume it’s a guy who said that and I’m going to say, ‘Then just marry one woman. I’m cool with that,'” Warren said, before adding to uproarious laughter, “Assuming you can find one.”

How would I respond to someone who says marriage is between one man and one woman? #EqualityTownHall pic.twitter.com/8uNXqXI5n7

The CNN chyron described Cox as “Chair, Human Rights Campaign Board of Directors.” It could have just as easily identified Cox as “Donor, Elizabeth Warren.”

Cox’s Twitter profile indicates that his full name is “Morgan W. Cox III” and he is a partner at the investment firm Marquis Group. The Marquis Group is located in Plano, Tex., part of the larger Dallas-Fort Worth metropolitan area. FEC filings show that a “Morgan Cox III” from Plano, Tex., who listed his occupation as “investor” donated the legal maximum of $2,700 to Warren’s Senate primary campaign in 2017, followed by two donations totaling $2,700 to her general election campaign the following year. Cox also donated $2,700 to the Elizabeth Warren Action Fund PAC.

[…] The lack of disclosure comes after CNN was criticized in February for not disclosing the Democratic Party ties of town hall participants who asked harsh questions of outsider presidential candidate Sen. Bernie Sanders (I., Vt.), including identifying the Baltimore County Democratic Party chairwoman as a “former biology professor.” A CNN spokesperson admitted in a statement that they “should have more fully identified any political affiliations” in response to the February controversy.

Warren’s campaign said Friday that the clip got “12 million views in 15 hours.”

A spokeswoman from the Warren campaign says this video from last night's CNN Town Hall has amassed 12 million views in 15 hours, accounting for all the places it's been posted. #IACaucus https://t.co/bnSewVHkxL

CNN’s town halls are as fake as ABC’s war footage.