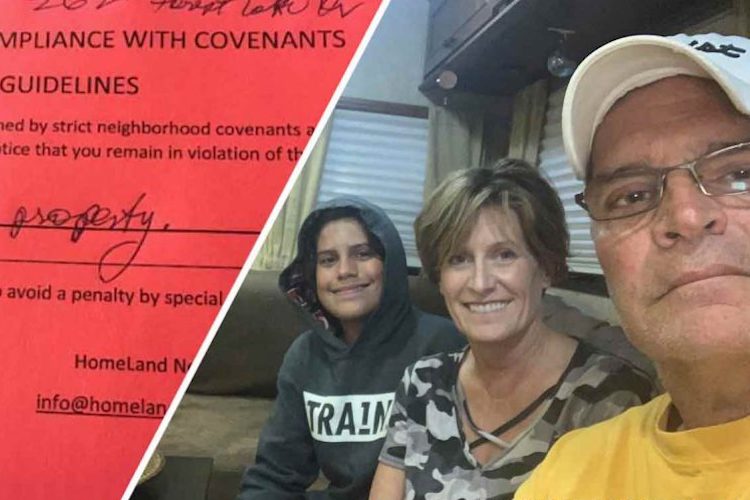 Madison, MS — Last year, the Navari family was devastated on Christmas Eve when their home caught fire and destroyed all they had. Pam Navari thought things couldn’t get any worse after the fire. However, thanks to the government, she was wrong. Now, as the family battles the insurance company to pay for the damage, they are also battling government who says it’s illegal for them to live in an RV in their own driveway while they conduct repairs.

The Navari’s didn’t just set up an RV and start living like Uncle Eddie in the Griswold’s driveway, dumping their sewage into the storm drain. They actually sought out permission from city officials first, and were approved.

“We called the alderman, the mayor was aware of it. We were told as long as I was approved by the homeowners (association) board, then we could get a temporary permit. They were OK with it,” Navari said.

Despite being told it was okay, one apparently heartless board member reneged on the decision and made it their mission to make the Navari’s lives a living hell.

Navari posted a photo of the email to Facebook, proving her claims. This alleged “sympathy” from the board member was quickly followed up with a demand to GTFO.

“This is a bonafide emergency. What we are going thru could happen to anyone in our neighborhood or others,” she said. But city officials couldn’t care less about a family emergency and the family is now in violation of city ordinances which could land them in jail.

Having nothing better to do, the city actually sent enforcers out to the property to threaten and intimidate the family. Rich Navari, Pam’s husband witnessed the intimidation first hand. According to Pam:

Now, we are not just having to fight this insurance company. This week we had to go in-front of the City. Since the President of the HOA never sent a letter to the Home Land Management company. We are now in violation of zoning ordinance. Yesterday we received a citation summons. When Rich showed the officer our home, he was apologetic for having to deliver this. On November 19th at 1:30, we have to go to court. While Rich was standing in our driveway, a truck sped up and parked in front of our driveway and a guy jumps out. An employee of the management company as starts taking pictures. While he is saying and motioning with his hands, you were supposed to have this thing out of here by the 15th. I’m reporting you today.

Pam posted a video this week to Facebook expressing their frustration.

“I cannot believe that people can be so cold and unempathetic about what people are going through,” Navari said.

We agree. However, this is the nature of the state. Now, the family is in a race against time. They are hoping their attorney reaches a settlement with the insurance company in time before they are forced out on the street, or worse, go to jail.

“We are not trying to hurt anybody. We are trying to continue to be a family. Every day we are fighting to have this attorney deal with the insurance company so we can get our home back. That’s what we are trying to do,” Navari said.

The family has only a few weeks before their court date next month. If they don’t get everything settled with the insurance company before then, they face fines, court costs and possible jail time.

And this is what a family attempting to rebuild their home after a fire looks like in the land of the free.

This action by city officials should come as no surprise, however, as government has shown us that they are willing to steal homes from elderly retirees over $8 in property taxes. Shameful indeed.

**This article (Family Facing Jail for Living in RV On Their Own Property To Repair Home After Fire) was originally published at The Free Thought Project and is re-posted here with permission.**