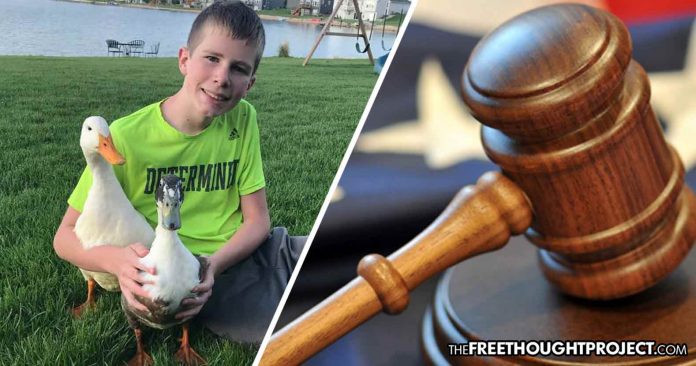 Georgetown Township, MI — The parents of a 12-year-old boy with autism are going up against town officials after the town ordered the family to get rid of his ducks. Citing complaints from neighbors, the town told the family that they could no longer have the two ducks, named Nibbles and Bill. But they are not backing down.

The order to get rid of the ducks comes in spite of the fact that 12-year-old Dylan Dyke’s doctor designated the birds as emotional support animals for him.

According to the family, the ducks are kept in a small pen behind their home.

As WOODTV reports, Georgetown Township zoning officials issued the order to Mark and Jen Dyke after neighbors complained that their son Dylan’s ducks were a nuisance, township leaders said. Neighbors complained the birds eliminated on their property and created an unpleasant odor.

“The ducks are free to roam around when their autistic child is present, but often stray from the property and defecate on others (sic) lawns, beaches and patios,” one complaint read in part, according to WOODTV, who obtained the complaints through a Freedom of Information Act request.

“The sight and smell is offensive and embarrassing… It could affect our home values as well,” another complaint stated.

The dispute arises as Township officials claim they are simply enforcing an ordinance that prohibits homeowners in the area where Dykes lives from having farm animals on their property. However, the family and their doctor claims that the Nibbles and Bill are more than mere farm animals.

The Dykes have since submitted a request for an ordinance variance because of the nature of these ducks.

“These ducks are his everything,” Jen Dyke, Dylan’s mother said. “They’re his whole life.”

If the birds are taken from Dylan, Dr. Dykstra says the results could be devastating.

“I believe it would cause significant emotional distress for him,” he said.

In an interview with WOODTV, Dylan was excited to talk about his feathered friends. “I can tell them anything and they just won’t be bothered by it,” Dylan said as Nibbles and Bill sat in his lap quacking. “These ducks understand me so much. My siblings do as well, but these ducks just trust me more.”

“It just wouldn’t be the same,” he said, noting how it would be if he lost his ducks. “I know we’re going to win since I love these ducks so much and I know that a lot of people online love ducks as well.”

Dylan’s support page on Facebook has received overwhelming support and a GoFundMe campaign has already surpassed its goal for the family’s legal fees.

The family is now promising to donate all extra funds to charity.

A statement from the association noted that they are actually trying to find a solution that benefits all parties.

“While weighing the interests of all neighbors in our neighborhood, we have attempted to facilitate a manageable resolution, and remain committed to an outcome that balances clear and stable expectations for all neighbors, the consideration of specific family requests, the mitigation of negative impacts on others, and a predictable path for any similar future requests,” the homeowners’ association said, in part.

One potential solution to the problem would be to fence in the Dyke’s yard and not allow the ducks to roam onto their neighbors’ property. Another would be to employ a deep litter method in their pen which would drastically eliminate the odors which may be bothering their neighbors. Hopefully these ideas are considered so Dylan will not be traumatized by the removal of his support ducks.

“We live here,” said Mark Dyke, Dylan’s father. “We want to get along with everybody as much as we can but at the same time we need to advocate for our special needs son.”