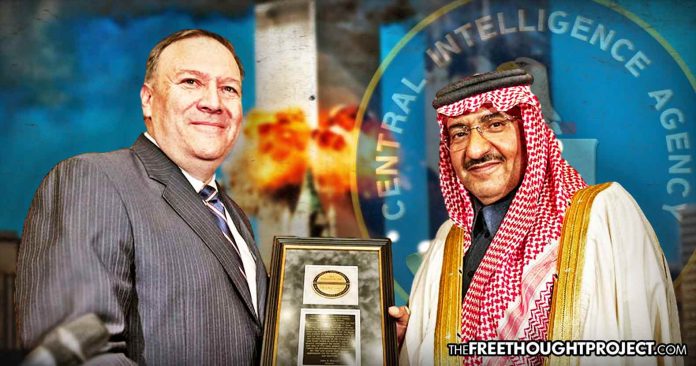 In two weeks, the citizens of the United States will be bombarded with patriotic imagery, messages, and the oft-repeated slogan of “9/11, Never Forget.” Over the last several years, however, the attitude of ‘never forget’ has been slowly shifting to, “we know you lied to us.” This movement began to gain serious traction with the release of the 28-pages and then moved to thousands of victims suing Saudi Arabia for their role in the attack. Now, even FBI agents who worked on the investigation are coming forward to expose an alleged conspiracy between the CIA and Saudi Arabia.

“It is patently evident the [9/11] attacks did not need to happen and there has been no justice.” -FBI Agent Mark Rossini

The testaments of these two FBI officials will be part of a new book on 9/11 written by investigative journalists John Duffy and Ray Nowosielski. Duffy and Nowosielski became famous in 2009 when they interviewed Richard Clarke, a White House counterterrorism adviser during the Bill Clinton and George W. Bush administrations.

In the interview, as Newsweek reports, Clarke explained that top CIA officials, including director George Tenet, had withheld crucial information from him about Al-Qaeda’s plotting and movements, including the arrival in the U.S. of future hijackers Khalid al-Mihdhar and Nawaf al-Hazmi. In The Watchdogs Didn’t Bark: The CIA, NSA, and the Crimes of the War on Terror, the authors assemble a compelling case of a government-wide cover-up of Saudi complicity in the affair.

Clarke raged against then-CIA director Tenet in a book exposing the CIA’s complicity in covering up the known presence of Al-Qeada operatives working in the United States and plotting the attacks.

“I believed, for the longest time, that this was one or two low-level desk officers who got this [information about Hazmi and Mihdhar] and somehow didn’t realize the significance,” Clarke said. But “50—five oh—50 CIA officers knew this, and they included [Tenet and] all kinds of people who were regularly talking to me? Saying I’m pissed doesn’t begin to describe it.”

According to Newsweek, Pat D’Amuro, an even more senior former FBI counterterrorism official, said, “There’s no doubt in my mind that [withholding the information] went up further in the agency” than those managers. “And why they didn’t send it over, to this day, I don’t know why.”

While we may never know why the CIA covered up this information, we do know the result of their actions—2,900 dead Americans and thousand of others injured.

Now, all of this information coming to light is changing the national conversation about 9/11. Instead of shouting down those who question the official story, those who covered it up, including the CIA and Saudi Arabia, are being outed for their role.

A year later, the highly redacted CIA inspector general’s report cracked open another window, saying that some agency officers had “speculated” that “dissident sympathizers within the government” (i.e., religious extremists) may have supported bin Laden. Subsequent investigations have revealed that officials from the kingdom’s Islamic affairs ministry were actively helping the hijackers get settled in California.

“Saudi intelligence has admitted that they knew who these two guys were,” Andrew Maloney, an attorney for families, told Newsweek last week. “They knew they were Al-Qaeda the day they arrived in Los Angeles. So any notion from the Saudi government saying, ‘Oh, we just help out all Saudis here’ is false. They knew. And the CIA knew.” — Newsweek