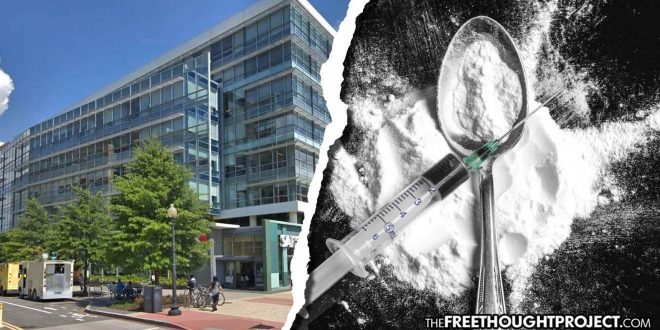 Washington, D.C. — Agents with the Federal Bureau of Investigation raided a government agnecy last week to execute a search warrant looking for evidence of a fentanyl drug ring. During the raid on the Department of Consumer and Regulatory Affairs, FBI agents found the fentanyl they were looking for and discovered a massive heroin and fentanyl ring being run out of the government building just a few feet from an elementary school.

According to investigators, undercover agents caught Darrell Marcellus Pope operating the massive drug ring in which thousands of dollars of fentanyl and heroin were being sold. The FBI reported that the drug ring stretched over multiple states from Woodbridge, Virginia, to D.C. to Pope’s Clinton, Maryland, home.

According to court documents, “Pope was observed outside his office building on foot and walking up to meet” the undercover officer. On multiple occasions Pope sold the detective varying amounts of fentanyl or heroin and fentanyl—some transactions were for as little as two grams, and one was for as much as 30 grams, the affidavit says.

The operation employed drivers who regularly drove people from Prince William County to D.C. so they could buy drugs from Pope, according to court documents. The drugs were sold at $100 per gram. In at least one sale, Pope was seen with a Glock 9mm pistol.

FBI agents found an ounce of the deadly drugs at Pope’s home and also found fentanyl at his workspace inside DCRA headquarters, where Pope was arrested. When he was taken into custody, Pope had 30 grams of fentanyl on him, according to court documents.

Although fentanyl was discovered in locations inside the agency at which other employees had access, the FBI announced that they did not think the entire agency was behind the ring.

“Yesterday, the Federal Bureau of Investigation’s Washington Field Office executed a search warrant related to an ongoing investigation,” Deputy Mayor for Operations and Infrastructure Lucinda Babers told DCist in an email statement. “The search was executed at the employee’s work station at the District’s Department of Consumer and Regulatory Affairs. The employee was placed on administrative leave today. The search warrant is not related to any agency operations.”

The idea that the FBI discovered a drug ring operating out of the DCRA is incredibly ironic given the agency’s mission of “protecting the health and safety of residents.” However, it should not be surprising. Government agents are often times the largest offenders in the state’s war on drugs.

As TFTP reported last year, a New York Police Department officer was arrested after she was caught running a massive cross-country heroin trafficking ring, all while using her badge as a cover to keep police away from the operations.

The Drug Enforcement Administration began investigating NYPD Officer Yessenia Jimenez, 31, in January 2018 after they found the phone number of her boyfriend, Luis Soto, 33, on the cell phone of a narcotics trafficking suspect.

The investigation concluded that Jimenez and Soto were conducting a heroin trafficking operation that stemmed Mexico to New York. The New York Daily News reported that the pair was arrested after they made a trip to Massachusetts to meet with a heroin trafficker.

Before that, a massive raid was carried out by the FBI of the Tangipahoa Parish Sheriff’s Office and the Hammond Police Department. The raids were part of a year-long investigation into a U.S. Drug Enforcement Agency task force accused of a massive conspiracy to rob drug dealers and profit from selling the stolen narcotics. Two entire police departments were shut down after they were implicated in a multi-state drug ring.

As the Free Thought Project reported before that, a California police officer was busted after driving 247 pounds of marijuana all the way across the country. Yuba County Deputy Christopher M. Heath was caught in York, Pennsylvania with a shipment of marijuana that was worth over $2 million.

These people were responsible for putting nonviolent people in prison for using and selling drugs. Meanwhile, they were all selling drugs and taking part in the same actions for which they advocated locking people up. State hypocrisy at its finest.