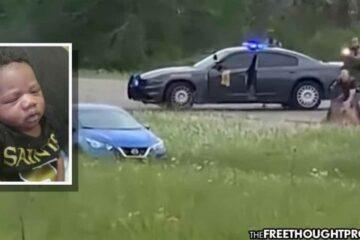 Biloxi, MS — A tragedy unfolded in May when an hours-long police chase that began in Louisiana came to an end in Mississippi. After police cornered Eric Derrell Smith, 30, in the median of I-10, they opened fire on him as he sat in the driver’s seat with one hand on his infant son and another reportedly on his gun, according to reports. Now, 6 months later, the FBI has stepped in to investigate.

“We needed an independent source to analyze the evidence and then it will be turned over to us,” Biloxi Police Chief John Miller said.

Indeed, an independent source is needed as police originally refused to claim the bullet which killed three-month-old La’Mello Parker. What’s more, their claims of a “shootout” happening prior to the dead of the infant were found to be baseless.

As the Sun Herald reports:

But, Miller said, he got the FBI Crime Lab involved since MHP and the state crime lab are entities that operate under the umbrella of Mississippi Department of Public Safety.

Police claimed there was a “shootout” during the chase but it was later revealed Smith did indeed fire a shot, but the shot came an hour before the pursuit ended. As the Advocate reports, at some point during the pursuit — at least an hour before the final shootout — Smith fired his weapon, according to a source with knowledge of the investigation who was not authorized to discuss the matter publicly. No officers were injured.

According to police, they responded to a 911 hang up call in May in Baker, La. When deputies arrived on scene, they found Christin Parker, 32, and her nephew Brandon Parker, 26, dead from gunshot wounds inside their house. Christin Parker’s daughter was also in the home when they were killed, but ran outside after hearing the gunshots and was able to get to a neighbor’s home.

According to police, the daughter told police what she witnessed and they were quickly able to identify Smith as the suspected murderer. Christin Parker had reportedly been in a relationship with Smith and they had recently gone through a breakup.

After killing both Parkers, Smith kidnapped his son from the home and fled, according to police. Officers caught up with Smith on I-10 in Biloxi and deployed spike strips which slowed down his vehicle but did not stop it.

In a cellphone video published online, police are seen conducting a pit maneuver to stop Smith’s car and he becomes trapped in the median. He is then quickly surrounded by a dozen cop cars. Smith was contained and isolated from the general public as police had closed the interstate.

A brief standoff ensued, however, only a few seconds passed before police opened fire on Smith and his infant son, killing them both.

“Despite the efforts of medical staff, the child passed away as a result of the injuries sustained,” Maj. Chris DeBack of the Biloxi Police Department said in a statement to WLOX.

In the video, we see movement out of the driver’s side window just before police dumped multiple rounds into the vehicle. However, Smith does not appear to fire on officers before they open fire on him leading many to believe a standoff and negotiation should have taken place rather than immediate deadly force.

Prior to this horrifying incident, Smith had no criminal history of domestic violence and there had been no previous complaints from his alleged victims.

Two Harrison County Sheriff officers, including a deputy, are on administrative leave pending the investigation, according to WLOX.

Below is the disturbing video.