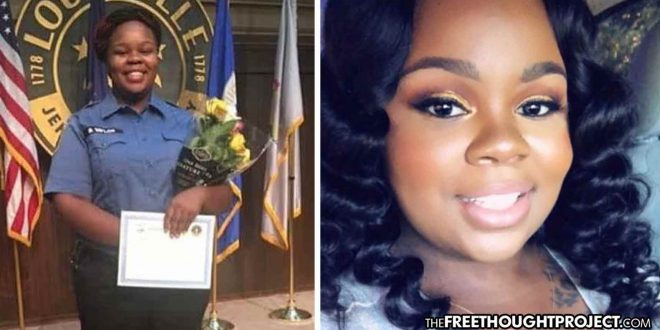 Louisville, KY — According to his attorney, Kenneth Walker woke up in the middle of the night to armed intruders kicking in his door. He then grabbed his legally owned firearm to defend himself. A hail of gunfire subsequently ensued, all but one of the bullets coming from police weapons. After the smoke cleared, Walker’s girlfriend 26-year-old Breonna Taylor, a certified EMT working on the front lines of the coronavirus pandemic, died in her bed from the gunshot wounds. This happened on March 13, and since then, an FBI investigation has been launched and the Louisville Police Chief Steve Conrad suddenly quit.

According to the AP, Conrad sent out a letter to officers Thursday afternoon, saying there have been “a lot of ups and downs” in the job since he started in 2012. Conrad has come under withering criticism in recent weeks as the family of Breonna Taylor has sued the department and called for his firing.

“You all are weathering a lot right now and I know how challenging this is,” Conrad wrote in the letter to officers. “Approach this as we approach all our struggles — as a team.”

Whatever struggles he’s dealing with cannot compare in size and scope to the ones facing Taylor’s family and Kenneth Walker.

“We will not rest until everyone involved is held accountable, and Breonna Taylor gets the justice she so deserves,” Benjamin Crump, a high-profile civil rights attorney said Thursday in a press statement.

Just before the chief made his announcement of resignation, the FBI announced on Thursday that they opened an investigation into the death of Taylor. We think this is no coincidence.

“The FBI will collect all available facts and evidence and will ensure that the investigation is conducted in a fair, thorough and impartial manner,” Robert Brown, special agent in charge with FBI Louisville, said in a statement.

Officials from the Louisville Metro Police Department claimed that officers knocked on the door and announced themselves and they were “immediately met by gunfire” from Walker, upon entering the home. However, witnesses, and facts tell a different story.

“The Defendants then proceeded to spray gunfire into the residence with a total disregard for the value of human life,” the family’s lawsuit alleges. Taylor and Walker “believed the home had been broken into by criminals and that they were in significant, imminent danger,” the suit added.

As TFTP reported, this wholesale government sponsored execution of Taylor and subsequent unlawful arrest of Walker took place without cause. According to a lawsuit filed by the victim’s family, Taylor was shot 8 times during a drug raid on the wrong home.

For those who may be unaware, Walker is a legally registered gun owner. What’s more, the state of Kentucky uses the Castle Doctrine with a “stand your ground” law. Walker was well within his rights to engage the armed intruders who had no right to be in his home that night — badge or not.

Walker was engaged in no unlawful activity. He has no criminal history and was starting a new job with UPS. No drugs were found at the home and he is not facing any drug charges because cops botched the warrant and were not even supposed to be there, according to the family’s attorney. Cops were reportedly looking for a suspect named Jamarcus Glover, who lived over 10 miles away from Walker and Taylor’s home and had been arrested before the cops even broke down their door.

It was also obvious that Walker had no idea the intruders were cops, especially given the witness testimonies claiming officers never identified themselves before the shooting began. Nevertheless, for defending himself in his own home against armed robbers in the wrong house looking to kidnap him for alleged drug possession, Walker has been charged with first-degree assault and attempted murder of a police officer.

As TFTP reported last week, the family of the decorated EMT — who was murdered by cops attempting to snuff out an arbitrary substance deemed illegal by the state — announced they filed a lawsuit to hold the cops accountable.

“LMPD has tried to sweep this under the rug,” Sam Aguiar, another attorney on Taylor’s case said. “The family right now has a very understandable desire to know the full circumstances of what went on that night.”

Indeed, they had successfully swept it under the rug and the story gained very little national attention at the time, except from outlets like TFTP. Now, it is finally getting the attention it needs.

In March, police fired 22 bullets into the couple’s home, many of them shot from outside. According to Aguiar, police were actually looking for someone else and other officers had picked the suspect up at his home in a separate raid shortly before the shooting.

According to the lawsuit, LMPD executed at least two search warrants — including one at Taylor’s home — in the early morning of March 13 in an attempt to locate a suspect named Jamarcus Glover.

But police had already located Glover at his home and detained him before executing the warrant at Taylor’s residence, the suit says.

Glover’s home is more than 10 miles from Taylor’s home on Springfield Drive, records show. He faces drug and gun charges.

At 12:40 a.m., LMPD Sgt. Jonathan Mattingly and officers Brett Hankison and Myles Cosgrove entered Taylor’s residence without knocking or identifying themselves as police, according to the suit, which cited statements from multiple neighbors.

Witnesses to the shooting corroborate this narrative, and told local media that police never announced themselves before barging in to the home.

“All she heard was a ram (breaking through the door) and gunfire,” the unidentified neighbor said.

“These two were not drug dealers,” she said. “It just don’t make sense to us at all.”

After the raid, Walker was arrested but was released from jail after his arrest because he is not a threat.

Naturally, this infuriated the police union.

“Not only is he a threat to the men and women of law enforcement, but he also poses a significant danger to the community we protect!” River City FOP president Ryan Nichols wrote in a Facebook Post Friday. “Home incarceration was not designed for the most violent offenders!” “I call on the public to condemn the actions of Judge Olu Stevens.”

But according to his family and his attorney, Walker is not a violent offender and was an innocent man raided by cops who murdered the love of his life.

“These are two good kids,” said Bianca Austin, Taylor’s aunt. “This is incompetent police work. My niece lost her life over this.”

“Something went terribly wrong,” Aguiar said. “This was clearly a botched execution of a warrant.”

The police union does not agree and claim that the family’s version of events simply doesn’t matter and is “irrelevant.” They do not see Walker as a man defending his home from intruders who kicked in the door in the middle of the night. They see him as a cop killer who needs to be removed from society.

We disagree. Walker is lucky to be alive after these incompetent cops came in spraying bullets. Dennis Tuttle who was murdered alongside his wife Rhogena Nicholas in a similarly corrupt raid, cannot say the same. Hopefully, justice is served in this case and an innocent man is not sent to jail for defending his home.

UPDATE: Luckily, as of Friday evening, the cops are wrong. The charges against Walker have all been dropped.

A petition has since been launched to bring charges against the officers involved and has since garnered nearly 200,000 signatures — hardly one that can be ignored.

City Mayors Working Directly With UN as US Government Surrenders Authority to WHO (Video)
May 18th, 2022 Sons of Liberty Media