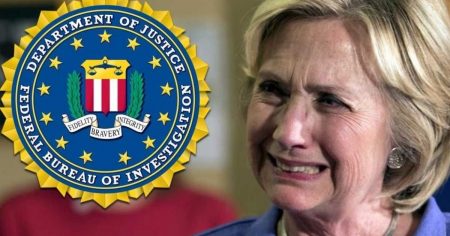 The FBI may be forced to turn over charts they have that contain information on potential “statutory violations” that were committed by former Secretary of State Hillary Clinton with her use of a non-secure, non-government illegal email server to conduct government business.

According to Judicial Watch, the lawsuit is seeking draft copies of then-Director James Comey’s talking points at his July 2016 press conference in which he made the recommendation that Clinton not be prosecuted for her criminal misconduct and mishandling of classified information, something that has landed other Americans in jail.

Judicial Watch filed the lawsuit in the United States District Court for the District of Columbia after the DOJ failed to respond to a December 3, 2018, FOIA request (Judicial Watch v. U.S. Department of Justice (No. 1:19-cv-00800)). Judicial Watch seeks:

Judicial Watch recently uncovered DOJ records in a related lawsuit showing that three days after then-FBI Director James Comey’s press conference announcing that he would not recommend a prosecution of Clinton. On July 8, 2016, the Special Counsel to the FBI’s executive assistant director in charge of the National Security Branch, whose name is redacted, wrote to Strzok and others that he was producing a “chart of the statutory violations considered during the investigation [of Clinton’s server], and the reasons for the recommendation not to prosecute…”

Neither these talking points nor the chart of potential violations committed by Clinton and her associates have been released.

“Judicial Watch will continue pressing for the secret FBI chart of potential Hillary Clinton crimes,” Judicial Watch President Tom Fitton said. “The FBI should focus on this Clinton ‘matter’ now that it is unencumbered by the corrupt partisanship of Comey, McCabe, Strzok, Page, etc.”

Now, all of this would be grand if we had confidence in a Justice Department and president that actually had resolve to bring justice in the matter. Frankly, I don’t have any confidence in either to do so, though I hope that I’m wrong. I just don’t think I am considering the lack of justice we’ve seen in the past couple of years concerning matters like this.

Still, it will be more things that news people can write about and document not only the crimes and corruption but those who cover it up, and it will all be used to get people in the voting booths next year, but justice… well, that’s a different story.