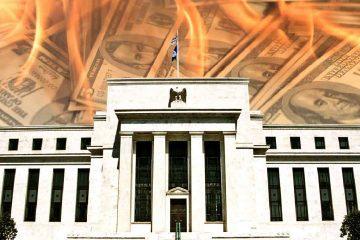 What do the Federal Reserve and neoconservatives have in common? They both refuse to admit that their policies — the neocons’ promotion of perpetual war and the Fed’s manipulation of the money supply — are complete failures, having produced the opposite of the promised results.

The latest example of the Federal Reserve engaging in Bill Kristol-like levels of denial is the Fed’s continued insistence that the return of 70s-style inflation is a “transitory” phenomenon resulting from the end of the lockdowns. The Fed has acknowledged the “transitory” inflation will last until at least 2022, yet it is still determined to keep interest rates at or near zero until the “jobs situation” improves.

It is unlikely that the Fed will stick to its plans to “taper” its purchase of Treasury bonds. The Fed’s Treasury bond purchases enable the federal government to run up the debt without increasing taxes or paying punishingly high interest on the debt.

The Congressional Budget Office projects that by 2030 the federal debt interest cost will more than double to 829 billion dollars. That is more than the government spent on the military in 2020!

Despite the looming fiscal crisis, Congress is unlikely to cut spending anytime soon. Instead, Congress members are debating a 1.75 trillion dollars “social spending” plan, having just passed a 1.2 trillion dollars infrastructure bill. Contrary to the claims of President Biden and his allies, this new spending will not reduce inflation. What it will do is hasten and deepen the inevitable economic crisis caused by government overspending.

TRENDING: Murder In The Name Of COVID-19 & The Bill Gates Vaccine

Of course, most Republicans will continue opposing big increases in spending and debt … as long as a Democrat sits in the Oval Office. A Republican who becomes president will likely believe, as Dick Cheney has said, that President Reagan taught us that deficits don’t matter. The difference between the parties is Republicans are less likely to raise taxes. So, no matter who controls Congress and the presidency, spending and debt can keep increasing.

The Fed may also take dramatic action to keep interest rates low if other purchasers of federal debt demand higher interest rates in anticipation of future inflation. Such a situation would be a sign of what Ludwig von Mises called a crack-up boom. A crack-up boom occurs when the public anticipates continuing devaluation of the currency, causing them to factor future price increases into their economic plans.

Crack-up booms are preceded or accompanied by economic crises that can lead to the rise of authoritarianism. However, this is not inevitable. Important steps can be taken including cutting spending on militarism and corporate welfare, phasing out the entitlement and welfare programs, and auditing and ending the Fed. Those of us who know the truth should seek to convince our fellow citizens of the importance of restoring a limited, constitutional government that does not try to run the economy, run the world, or run our lives.