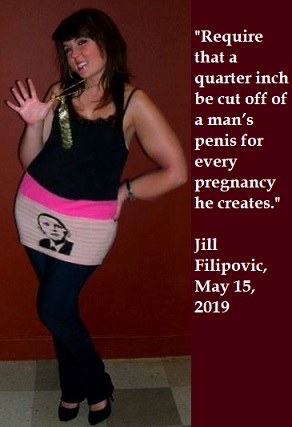 First Printed at Fellowship of the Minds

Liberalism is way, way worse than a mental disorder.

The Left are evil.

Already hysterical over Georgia Republican Governor Brian Kemp’s signing of the fetal heartbeat bill into law, with has-been actress Alyssa Milano calling for a sex strike in protest, the Left are now foaming-in-the-mouth rabid over Alabama’s near-total ban on abortion.

Two days ago, on May 15, 2019, Alabama’s Republican governor Kay Ivey signed into law the Alabama Human Life Protection Act— America’s most restrictive anti-abortion law that makes it a felony for doctors to perform or attempt to perform an abortion in the state. The new law allows no exceptions for rape or incest but does allow for abortions in cases where the mother’s life is at risk.

Jill Filipovic, 35, is an avowed feminist, an attorney and writer. She’s a New York Times columnist, blogs at Cosmopolitan and The Huffington Post, and is the author of The H Spot: The Feminist Pursuit of Happiness who once asked American women to “divorce [their] Republican husbands” over now Supreme Court Justice Brett Kavanaugh’s nomination.

Seven hours after Governor Ivey tweeted that she had signed the Alabama Human Life Protection Act into law, Filipovic posted this venomous and truly evil tweet:

Pregnancy and childbirth cause serious and permanent changes to many women’s bodies. Require that a quarter inch be cut off of a man’s penis for every pregnancy he creates and see how quick we are to force women to indelibly risk and chance their bodies.

Here’s a screenshot of Filipovic’s tweet in the event she takes it down:

Filipovic promptly followed her “cut off men’s penis” tweet with another one calling for men to be made incontinent and their pubic bones be fractured: