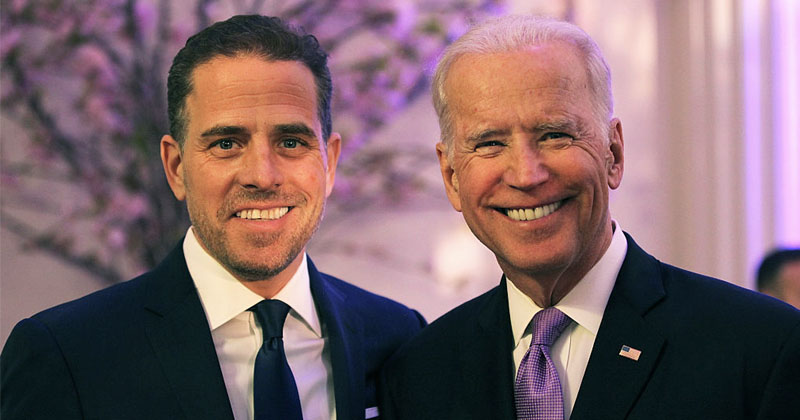 But, he is also a well-traveled and well-connected businessman.

Through the years he has been involved in some major controversies and our President knows that.

On Monday, it was reported that Hunter had a very harsh reaction to Trump’s latest threat to investigate Hunter’s dealings in Ukraine.

Biden, an admitted cocaine addict, told The New Yorker in a fluff interview that he heard of the potential probe as a helicopter was flying overhead.

“I said, ‘I hope they’re taking pictures of us right now. I hope it’s a live feed of the President so he can see just how much I care about the tweets,’” he said. “I don’t care. Fuck you, Mr. President. Here I am, living my life.”

“I said, ‘I hope they’re taking pictures of us right now. I hope it’s a live feed of the President so he can see just how much I care about the tweets,’” he said. “I don’t care. Fuck you, Mr. President. Here I am, living my life.”

Biden also expressed his dismay that the Trump administration was targeting him, suggesting he was under scrutiny solely for being the former vice president’s son.

“I would never have been able to predict that Donald Trump would have picked me out as the tip of the spear against the one person they believe can beat them,” he said.

Senator Rand Paul (R-Ky.) reacted to reports of Biden’s shady business dealings in a May interview, citing Joe Biden threatening Ukraine prosecutors with withholding $1 billion in loan guarantees, if they didn’t drop inquiries into his son over his suspicious kickbacks from a Ukrainian energy company.

“My understanding, this was reported in the New York Times, Joe Biden was asking the prosecutor to lay off of the company that Hunter Biden was working for for $50,000 a month, kicked out of the military, that’s extraordinary,” Paul said on ABC.

###Read the rest of Jamie White’s article at InfoWars###

For those who don’t know the backstory on Hunter Biden and his dealings in Ukraine, Breitbart did a piece on that earlier this year.

John Solomon reported on Hunter Biden’s receiving millions of dollars from Burisma Holdings after being installed on the company’s board during his father’s vice presidential tenure:

U.S. banking records show Hunter Biden’s American-based firm, Rosemont Seneca Partners LLC, received regular transfers into one of its accounts – usually more than $166,000 a month – from Burisma from spring 2014 through fall 2015, during a period when Vice President Biden was the main U.S. official dealing with Ukraine and its tense relations with Russia.”

Shokin told me in written answers to questions that, before he was fired as general prosecutor, he had made “specific plans” for the investigation that “included interrogations and other crime-investigation procedures into all members of the executive board, including Hunter Biden.”

“We’ve talked before about the deals he procured with the government for China,” remembered Schweizer. “The other place [Joe Biden’s] son, Hunter Biden, procured a big deal was in Ukraine. In Ukraine, it involved an energy company called Burisma, which is a very corrupt organization headed by an oligarch named Mykola Zlochevsky who is very close to ViktorYanukovich, the pro-Russian leader.”

Schweizer asked, “There’s all kinds of questions and implications. Is there a Russian component to this, because Burisma is such a corrupt company?”

“The bottom line is Joe Biden was the Obama administration’s point-person on policy towards Ukraine,” noted Schweizer. “He steered $1.8 billion in aid to that government and while he was doing so, his son got a sweetheart deal with this energy company – that we’ve been able to trace over just a 14-month period – paid $3.1 million into an account where Hunter Biden was getting paid.”

Schweizer highlighted Hunter Biden’s lack of professional or experiential bona fides in terms of his board position at Burisma Holdings.

Hunter Biden is an embarrassment to his family.

His drug-induced shenanigans are mildly entertaining from a comic perspective.

But Hunter Biden is also a shrewd businessman, with connections, and Donald Trump just got a meteoric rise out of Joe Biden’s son.

If Joe Biden hangs tough as we move toward 2020, we certainly have not heard the last of his son Hunter.

I’m feeling a Chris Farley scene is in order here:

Maybe Joe should get Hunter more involved in his campaign. 🙂

Even drug addicts know how to “Rock the Vote” and Hunter seems like the perfect spokesman for Biden voters.