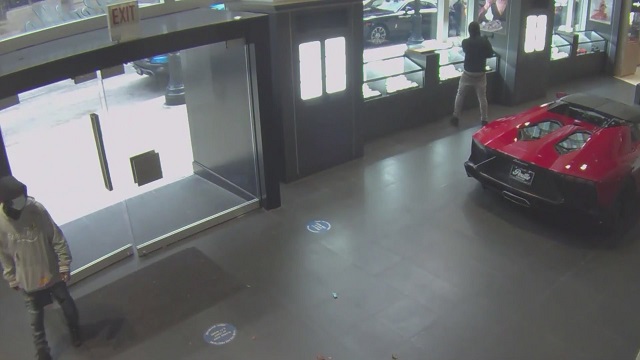 An exotic car dealership in Chicago was flash looted by armed thugs on Saturday who reportedly got away with $1-2 million worth of watches.

They were just one of many stores hit over the past week.

A pair of hooded and masked thieves can be seen on surveillance footage breaking into a Bentley, Lamborghini, and Rolls-Royce dealership on Saturday and smashing display cases to steal the watches. Local reporting says one of the men had a gun and 10 customers, including children, were in the showroom at the time.

“He was smart enough not to raise the gun, because my people had guns,” said Gold Coast Auto Gallery dealership owner Joe Perillo, according to WFLD News. “If he raised that gun, he would have been shot, we’d probably be in court defending ourselves.”

The stolen timepieces are reportedly Richard Mille brand, which can cost hundreds of thousands, if not millions of dollars.

[…] Less than an hour earlier on the same day, thieves reportedly stole $20,000 worth of coats from another retailer in Chicago, according to CWBChicago.com. Both robberies reportedly happened on a weekend the Chicago Police Department had “a special plan and extra resources” to ensure downtown stores “remained safe”.

No watch is safe.

There were tons of flash lootings caught on camera in just the past week or so.

Perhaps getting on your knees for Black Lives Matter rioters and looters wasn’t the best idea?