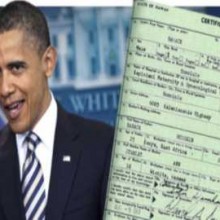 Reed Hayes is a court qualified handwriting and document examiner whose business is located in Honolulu, Hawaii. He has nearly 40 years of handwriting related experience, and has worked as an international consultant and speaker. Never heard of him? Well, Hayes is the Certified Document Examiner (CDE) who produced the 40 page opinion referenced in the Mike Zullo affidavit that was submitted to the Alabama Supreme Court in the Obama eligibility case and his report concluded that the Obama birth certificate image, located at WhiteHouse.gov is a complete fabrication.

The rabid followers of the “O” (Obots) have rushed to denounce Reed Hayes as a “quack.” However, one might be surprised to learn that one of Hayes’ clients listed in the Expert Witness Directory at this link is an attorney with Perkins-Coie Law Firm.

Perkins – Coie is the law practice whose partners have provided Obama’s personal defense against all birth certificate and natural born citizen litigation over the past five years. Hmmmmm. Very interesting indeed.

If it turns out that Sheriff Arpaio is successful in getting Congress to investigate the authenticity of Obama’s BC, the Perkins-Coie legal team, who will be defending Obama, will be hard pressed to simply dismiss Reed Hayes as a “quack.” This fact will be especially significant now that it is a revealed and proven truth that members of the Perkins – Coie firm have used Hayes as an expert witness! Their own prior cases, where Hayes was used as a witness, would be severely compromised if they use Saul Alinski-styled mocking attacks on Hayes.

It has been reported that Mr. Hayes has been hounded by Obama operatives to discover the details of his 40-page forensic analysis of the Obama pdf birth certificate. He has been referring them to Sheriff Joe Arpaio and his Cold Case Posse, who now legally own his report, for further information.

I also found it interesting that someone sided with the Obama administration and attempted to bring up dirt on Hayes by pointing out that he was a homosexual with a “partner,” who is now deceased. Isn’t that interesting? Why would that be considered “dirt” from the Obama side? Isn’t he the one telling us that is “normal” and isn’t he the one helping to push the homosexual agenda along? Ah, the hypocrisy!

Mike Zullo responded to the revelation from Hayes, “This ought to serve as a warning shot across the bow to the naysayers of our criminal investigation in the Obama fraud case. The impressive credentials of Mr. Hayes, and the fact that he has testified in court cases for Perkins-Coie coupled with the fact that Mr. Hayes is a registered Democrat, demonstrates the integrity of our investigation and our conviction that we possess incontrovertible evidence to back our case. It must be emphasized that we possess much more evidence similar to this revelation that we have not yet released for public information.”

Attorney Orly Taitz, who has also been pursuing the Obama fraud, even to the Supreme Court, believes something else is going on. She writes:

I contacted Mr. Hayes, he stated that he made a deal with Mike Zullo that he will not cooperate with anyone else….

What is going on here?

To me this is like a Kabuki theater: great male song, dance and acting theater. Feds brought the law suit against Arpaio before he decided to become really hot on the issue of Obama’s birth certificate. When Brian Riley and 250 residents of AZ brought this complaint against Obama, Arpaio was already facing a federal law suit from Hispanics in his district, where they claimed that he violated their civil rights under the color of authority, that he does not investigate complaints of rape and sexual abuse in Hispanic enclaves. If convicted, Arpaio could get a prison term.

So Arpaio became very loud, very outspoken about Obama’s use of a forged birth certificate. Suddenly on August 31, 2012, right before the election, Obama dropped federal law suit against Arpaio and Arpaio never filed a criminal complaint against Obama. People donated millions of dollars, nothing came out of it. Arpaio never submitted his criminal complaint against Obama and Obama was reelected without a cinch.

She then asked why the far left were attacking her, yet quoting Mike Zullo.

“The answer is, because I am very close to proving Obama to be a criminal, who absolutely has to be removed from the White House and send (sic) to prison,” she wrote.

Taitz recently had her docket denied by Judge Lamberth because she used a pen, instead of a black marker to perform redacting on a document. “Big deal!” she wrote on Friday. “Monday morning he will have the same motion staring at him with black marker and not pen redacting. Lamberth did not indicate any other reasons, which means that within a short period of time we will get the original application to this Connecticut Social Security number of Harrison J. Bounel 042-68-4425. Now Lamberth has zero justification to deny it, as I have proven that the owner of the Social Security number that Obama is using would be 123 years old today and by SSA’s own 120 year rule they are obligated to give me his application even without his consent and without any proof that he is deceased. We have Obama cornered, I have his tax returns with his signature under the stolen Social Security number, I do not tell witnesses not to testify for others, I do not hide important evidence and I cannot be bought or intimidated by anything or anyone.”

Last year Obama attorney Alexandra Hill, of the Newark-based law firm Genova, Burn and Giantomasi, admitted that the image of Obama’s birth certificate was a forgery and made the absurd claim that it could not be used as evidence to confirm his lack of natural born citizenship status.

Seems to me Taitz is laying all her cards out on the table and Arpaio and Zullo, while seeming to have massive amount of evidence may be suspect by not filing a criminal complaint, while the Obama administration dropped their federal lawsuit against him. I don’t know what to make of them at this point. I do know that the evidence of forgery and that we have a Manchurian President seem overwhelmingly clear to me.