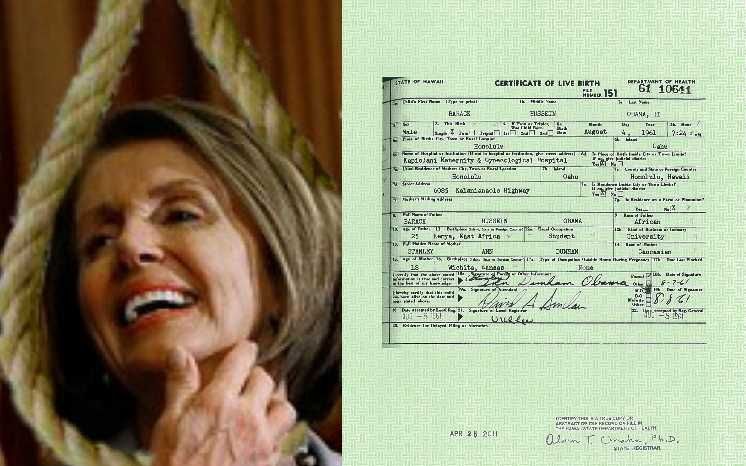 Originally published May 15, 2015, this article should be put forth if representatives had the guts to do what is right and deal with criminal and the usurper, Obama. Doug Vogt recently did a short interview with Honest American News involving the contents of his recently unsealed affidavit. Among other bombshells Doug dropped in the interview was his opinion that Nancy Pelosi will hang for her role in “worst crime in American History.”

Mr. Vogt explains that current Hawaii Senator Brian Schatz, who was Chair of the State Democratic Party in 2008, refused to certify Barack Obama as eligible to be president of the United States. Vogt’s claim is that Schatz knew there was no long form “certificate of live birth” (COLB). Nancy Pelosi made the certification and thus by Vogt’s logic is guilty of treason.

Vogt also talked about the controversy that surrounds him following the unsealing of his affidavit, which was admitted to court. Vogt pointed fingers at many who he believes worked on the forgery, which has “riled a few feathers” in the birther community.

Perhaps the biggest bombshell of all is that Vogt believes he can prove that the assigned number on the certificate could not possibly have been issued to Barack Obama. He has studied the sequencing and has determined that this COLB could not have been issued at that time. This is a critical piece of evidence because it does not involve a scientific examination of layering technology and forgery techniques that could be open to opinion. If the number is proven wrong then that is hard to debate.

Below is an audio clip. The part about Pelosi starts around the 12:45 mark.

Shortly after the 6:00 mark, Vogt mentioned that Hawaii Governor Abercrombie was caught admitting that there is no birth certificate. That audio can be heard below.

Last year we reported on another affidavit from a former Hawaii official, Tim Adams, who stated the same in his sworn testimony.