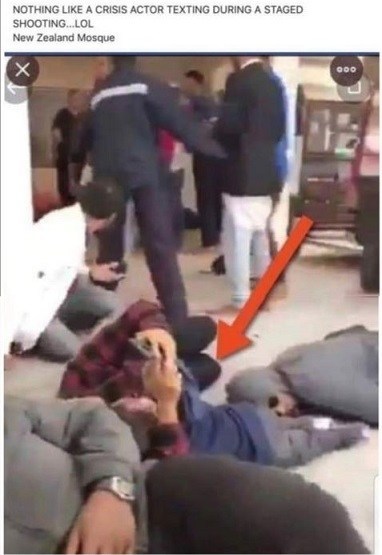 This post was originally printed at Fellowship of the Minds: March 20, 2019

On March 14, 2019, New Zealand sustained its deadliest mass shootings in modern history when a gunman, 28-year-old Brenton Tarrant, killed 50 people and injured another 50 at two mosques in Christchurch, New Zealand. The media immediately identified Tarrant as that most noxious of all monsters — “an alt-right affiliated white supremacist”. (Wikipedia)

We are told the shootings began at the Al Noor Mosque in the suburb of Riccarton at 1:40 p.m., and continued at the Linwood Islamic Centre at about 1:55 p.m.

This post is about the shooting at the second mosque — the Linwood Islamic Centre.

Martin Fricker reports for the (UK) Mirror, March 18, 2019, that a victim of the Linwood shooting is “hero dad” Zulfirman Syah, who saved the life of his 2-year-old son by shielding the toddler’s body with his own. Fricker writes:

A toddler clings to his dad to check he is alive, after his father was shot several times while shielding him from the Christchurch terrorist.

In a tender moment after Friday’s brutal shooting, little Averroes, two, clambers on top of Zulfirman Syah’s chest, places a hand on his heart and looks into his eyes for signs of life.

The image is from a video taken after the assault, which shows victims strewn across a blood-splattered carpet as cries ring out.

Zulfirman, known as Jul, who arrived in New Zealand with his family from Indonesia just two months ago, saved his son’s life by leaping on him as shooting began at Linwood Islamic Centre….

Zulfirman’s wife, Alta Marie, 33, said both her son and her artist husband were recovering.

She wrote on Facebook: “My husband shielded our son, which caused him to receive most of the bullets and much more complex injuries than our son. He is in stable condition following extensive exploratory and reconstructive surgery. While the road to recovery will be long, his condition has only improved since he arrived at hospital.”

Yesterday, in a comment, FOTM reader Keep up the good work had alerted me to a picture of a mosque-shooting victim texting (source: 12160.info):

The above pic is a screenshot from a video of what appears to be a rehearsal for the second mosque shooting (h/t Vince D.):

Did you catch hero dad at the beginning of the video?

I had a GIF made of hero dad, which shows his moving hands texting on his cell phone:

Below are side-by-side images of “texting dude” and “hero dad” showing the two to be the same man — same red-and-black checkered shirt, same black pants:

But wait, you say.

Maybe hero dad was texting after he had been shot.

Look at the video again.

From the Mirror‘s account: “The image is from a video taken after the assault, which shows victims strewn across a blood-splattered carpet as cries ring out.”

Do you see “blood-splattered” carpet or hear any cries “ring out”?

Instead, what we see are a clean carpet, people casually standing around, no bullet holes or blood spatter on the walls, no shattered windows, and fake wounded victims, including texting hero-dad and the guy at the 0:26 mark who, after being shot in the head, leaving a puddle of blood on the carpet, miraculously retained consciousness and even sat up!