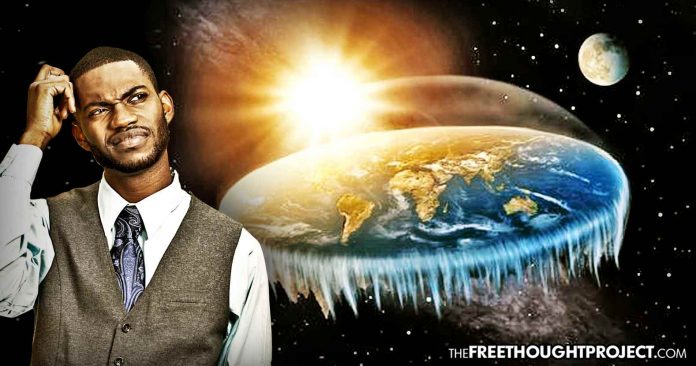 Since TFTP has long been depicted as running a website which occasionally indulges in conspiracy theories, we find it fitting to examine the claims of a man known on Facebook as Desmond Walsh. Walsh is a self-proclaimed “Flat-Earther” and is calling on his followers to join him in finally proving once and for all the earth is actually flat.

Despite the fact there have been nearly 100 years of pioneers, aviators, navigators, and explorers who’ve already circumnavigated the world in planes, sailboats, ships, and hot air balloons, people still believe the earth is flat.

Reportedly, just as in the era of Columbus, there are now thousands of people who believe this newly revived theory despite the many proofs to the contrary. Nevertheless, since a sucker is born every minute, it’s not hard to find followers willing to abandon logic, science, and history to push an agenda.

Walsh, in his latest announcement, claims he and his team of scientists (none of whom have a name or any credibility) will be traveling to the edge of the world to prove it’s flat. Here he is making his announcement.

To catch our readers up to speed with Flat Earth theories, one needs to know flat-Earthers believe the earth is situated on a disk with the North Pole being in the center of the disk and an arctic ice wall in Antarctica constituting the outermost barrier keeping the ocean water and the continents from sliding off the disk. Here’s a look by ABC at a Flat Earth Convention in Cary, NC.

The doubting Thomases simply do not believe Earth is round, despite NASA astronauts testifying to the contrary, who’ve had the privilege of a celestial birds eye view. Flat-Earthers believe the government is hiding the truth about the earth being flat. According to the theories, the images from space are doctored ones, and the earth is nothing more than a flat-shaped space ship of sorts.

Tyson refuses to debate flat-Earthers preferring to ask them to provide their “best” piece of evidence for their argument, as well as admitting, “what would it take to show that you’re wrong?” Despite overwhelming evidence to support a round earth, the astrophysicist says flat-Earthers are usually unshaken, albeit mistaken.

At any rate, if you want to travel with Des Walsh, in an unknown direction, to parts unknown to discover whether or not the earth is flat or round, feel free. However, at this time, and despite our best efforts, we have no specifics yet as to who precisely Des Walsh is, what his background is, or how he plans to get to the end of the earth, flat or otherwise.