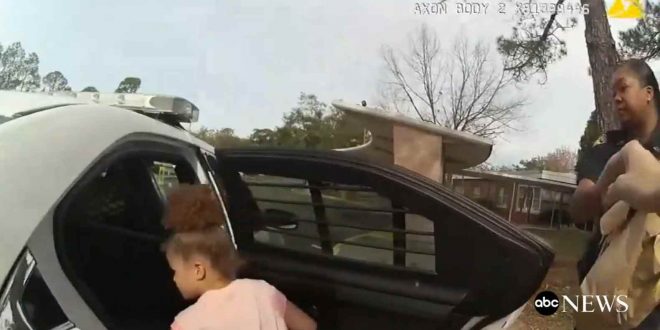 Jacksonville, FL — Marina Falk received a horrifying call from school earlier this month in regard to her 6-year-old daughter Nadia. Officials from Love Grove Elementary School called Falk to tell her that police had taken her daughter because she’d been acting out. Without her consent, authorities essentially kidnapped a 6-year-old girl and held her in a facility for two days.

Falk never received a call when her daughter acted out. Only after she was taken by police did she get the call.

“I was alerted of an incident after she was Baker Acted,” Falk said

When Falk called police to see where her daughter was, they told her there was nothing they could do. She said the officer told her: “‘There’s nothing else we could do. Your daughter is completely out of control, and we were not able to de-escalate the situation.’”

According to the school, Nadia was alleged to have destroyed school property, attacked staff and running out of school. She is six. Highlighting the reliance on the police state is the fact that this school is for mentally challenged children like Nadia. They are set up to teach children with mental disabilities yet they couldn’t find another way to handle this little girl other than having her Baker Acted.

In Florida, the Baker Act is supposed to confine truly mentally ill people who are dangerous — a six-year-old girl throwing a temper tantrum is hardly a danger to anyone. School officials apparently thought otherwise.

“When a student’s behavior presents a risk of self-harm or harm to others, the school district’s procedure is to call Child Guidance, our crisis response provider,” Duval County Public Schools said in a statement to ABC News.

Falk told Good Morning America that after finding out her daughter had been essentially kidnapped without her consent, she felt a lot of things, but most of all, she felt “helpless.”

“Heartbroken. I felt anger. Disappointment. But I think the biggest emotion, I felt, was helpless,” Falk told “GMA.” “Because I know that I’ve done everything I could possibly do to help my daughter at this school.”

Illustrating the unnecessary nature of this entire ordeal is the police body camera footage of Nadia’s removal from school. In the video, this little girl is walking calmly with police and appears to be well-behaved as she asks police if she is going to jail.

The officer is then heard telling another cop that “she’s fine, there’s nothing wrong with her,” after saying (before the footage cut off) that the school “may have agitated her a little bit.”

After the body camera footage was released, the school responded by claiming that police were not present when Nadia was allegedly throwing her tantrum.

Falk’s attorney, Reganel Reeves said they want to sit down with school officials so Nadia can continue her education.

“I just don’t want us to be perceived like we’re simply just out for money. We really want to try to resolve Nadia’s educational status so she can go to school,” Reeves told “GMA.” “So that’s really what our goal is, not really a lawsuit at this point.”

Reeves then went on to note that someone must be held accountable for a 6-year-old girl being treated in this manner.

“We’re prepared to put the state of Florida on notice and let them know that this is not acceptable. We must protect our children. So we’re asking for a dialog, a conversation. Since this is out here now, don’t let this go in vain,” Reeves said.

As crazy and over-the-top as this case seems, TFTP has reported on similar instances before. In fact, it happened in Jacksonville before.

As TFTP previously reported, just like Nadia, for throwing a temper tantrum, another 6-year-old named Nicholas, who has been diagnosed with attention deficit hyperactivity disorder and disruptive mood dysregulation disorder, was kidnapped from his elementary school by police and imprisoned in a psychiatric hospital.

Nicholas was held, including multiple stints in a ‘seclusion room,’ for three days at River Point Behavioral Health.

Once admitted to the hospital, the staff stayed true to their tendency of holding patients and did everything they could to use the state to force Nicholas to stay. This was in spite of his parents’ demands to let him out.

“I didn’t want him to be there at all,” Nicholas’ mom told BuzzFeed News, adding that she immediately asked the facility to release her son because he was so young and didn’t need to be there.

“It felt like my child had been kidnapped,” she said. “I can’t even hug my kid and tell him it’s going to be okay.”

At River Point, as reported by Buzzfeed, Nicholas would be given a bloody nose by another child, get locked in a “seclusion” room at 3 in the morning, and wait more than 24 hours to see a psychiatrist, according to medical records provided by his parents.

His parents asked at least three times to take their son home — every time, they were denied.

Also, in 2018, we reported on another child in Miami, Florida who was also kidnapped from school for a temper tantrum. He was just 7-years-old.

If you truly want a glimpse into how much the police state is infiltrating public schools, take a scroll through our archives, at this link.