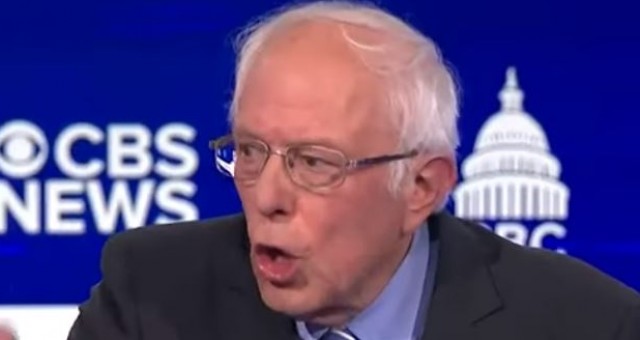 The Democratic Party civil war is heating up and getting very nasty.

Two Florida Democrats are suing to keep current frontrunner Vermont Sen. Bernie Sanders off of the states primary ballot claiming Sanders is not a Democrat- he’s an Independent.

Via the Tallahassee Democrat:

Frank Bach, a retired letter carrier, and George Brown, a retired social worker, filed a lawsuit this week in Leon County Circuit Court asking a judge to disqualify Sanders from the ballot and block Florida from certifying his votes.

“The plaintiffs have the right to cast their March 17 Democratic presidential preference primary votes for those who are really Democrats, not independents, and are entitled to this court’s protection of their right to vote for a Democrat, with the results not diluted by Defendant Sanders’ unlawful participation as an independent interloping improperly in the (primary),” the complaint says.

“The Florida Democratic Party Executive Committee voted unanimously to place Sen. Sanders on the Florida ballot,” he said in an email. “Votes cast for the senator are valid and must be counted.”

I completely understand and sympathize with the point these two men are trying to make.

Bernie Sanders has been an independent for most of his political career, and while he caucuses with the Democrats he has never been an official part of their party.

That said, given that Sanders presence on the ballot is backed and endorsed by the state’s official party apparatus this lawsuit has a slim to zero chance of succeeding.

It does show however that the war between the so called moderate win of the party and the Bernie Bro side is about to turn into a bloody mess.

Grab some popcorn as it will be fun to watch!

*This article may not be reprinted without expressed permission from The Federalist Papers.