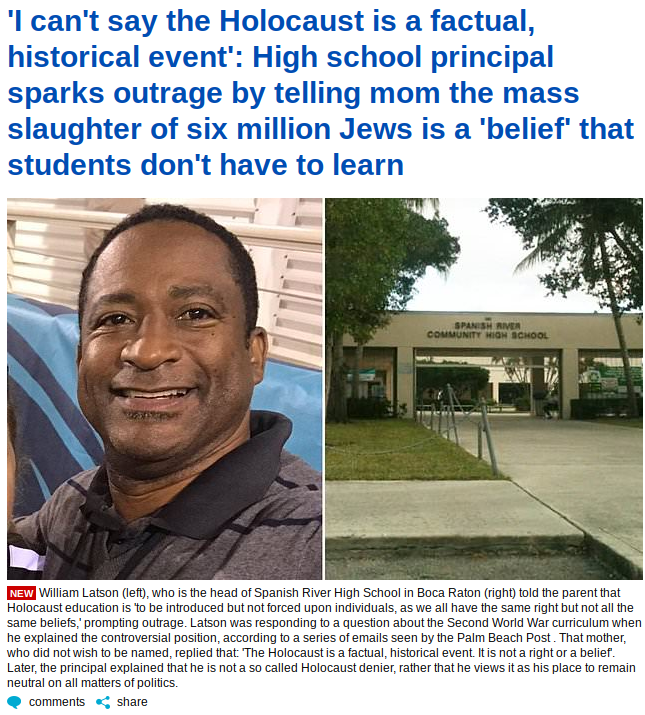 If you haven’t yet gathered enough reasons to home school your children, consider this story from Palm Beach County Florida.

Evidently the principal at Spanish River High School claimed that the murder of six-million Jews was not historical fact and thus claims his school had no obligation to teach about it.

A mother pushed for a year to address what she described as a school leader’s failure to separate truth from myth.

She sent off the email with few expectations — a routine question seeking a routine answer. How, the mother wondered, was the Holocaust being taught at Spanish River High School?

She wanted to make sure, she wrote to the principal, that her child’s school was making Holocaust education “a priority.” The response she received five days later, in April 2018, was anything but routine.

In an email reply, Principal William Latson assured her that the school had “a variety of activities” for Holocaust education.

But he explained that the lessons are “not forced upon individuals as we all have the same rights but not all the same beliefs.”

The mother, who asked not to be named to protect her child’s identity, was stunned. Was the principal of one of Palm Beach County’s largest public schools suggesting that the Holocaust was a belief rather than an actual event?

Thinking Latson simply had expressed himself poorly, she wrote back, asking him to clarify his comments. “The Holocaust is a factual, historical event,” she wrote. “It is not a right or a belief.”

She expected a chastened response. Instead, the veteran principal doubled down.

“Not everyone believes the Holocaust happened,” he wrote, according to email records obtained by The Palm Beach Post through a public records request. “And you have your thoughts, but we are a public school and not all of our parents have the same beliefs.”

He went on to say that as an educator he had “the role to be politically neutral but support all groups in the school.”

“I can’t say the Holocaust is a factual, historical event because I am not in a position to do so as a school district employee,” Latson wrote.

That response led the mother to launch a yearlong effort to address what she called a school leader’s failure to separate truth from myth regarding the genocide of an estimated 6 million Jews under Germany’s Nazi regime in the 1940s.

Newsweek reports that the principal could be in violation of the law:

In 1994, the Florida legislature passed a new law requiring school districts to incorporate Holocaust education as part of public school instruction. The state’s educational statutes require that topics like these be taught “using the books and materials required that meet the highest standards for professionalism and historical accuracy.”

In his reply, Latson expounded on his beliefs about the propriety of Holocaust education in public schools.

“Not everyone believes the Holocaust happened,” he wrote. “And you have your thoughts but we are a public school and not all of our parents have the same beliefs so they will react differently.”

The United States Holocaust Memorial Museum defines Holocaust denialism as “an attempt to negate the established facts of the Nazi genocide of European Jewry.”

“Holocaust denial and distortion are forms of antisemitism,” the museum explains.

Latson implied that a robust endorsement of Holocaust education would violate his oath to be “politically neutral,” adding that he does work to expose students to “certain things” without transgressing the will of individual parents.

He acknowledged this was a “touchy topic.”

To say it’s touchy topic is an understatement.

There is some good news…

The Mom got SOME of what she wanted, and changes are in now in progress at Spanish River High:

She didn’t doubt that Latson knew the Holocaust was real, she said in an interview, but she feared his reluctance to say so stemmed from a desire to avoid confronting parents who deny the Holocaust’s reality.

Denying or minimizing the Holocaust is described by the Southern Poverty Law Center, an organization that monitors hate groups, as “an essential manifestation of anti-Semitism.”

Why, the mother wondered, would a lifelong educator cast a historical fact as a “belief” to appease anyone?

Her push led to changes in how the Holocaust is taught at Spanish River High, a 2,500-student campus west of Boca Raton said to have one of the county’s largest Jewish student populations.

In a statement to The Post, Latson apologized for the way he expressed himself in his emails, saying it was not indicative of his actual beliefs or regard for historical fact.

“I regret that the verbiage that I used when responding to an email message from a parent, one year ago, did not accurately reflect my professional and personal commitment to educating all students about the atrocities of the Holocaust,” Latson wrote.

“It is critical that, as a society, we hold dear the memory of the victims and hold fast to our commitment to counter anti-Semitism,” he continued. He pointed out that Spanish River High’s educational offerings on the Holocaust exceed the state’s requirements.

But the Mom still isn’t satisfied:

The mother’s push culminated in a follow-up meeting in May, more than a year after Latson’s messages to her.

There, the mother met with Latson and two regional superintendents. The mother spoke of her frustrations about the assemblies, about how the school ensures Holocaust studies are taught in the classroom.

She said that she no longer had faith in Latson’s leadership, according to minutes from the meeting obtained by The Post.

Although it is not reflected in the minutes, the mother wrote to district officials afterward to say that in the meeting Latson had once more said that the Holocaust is a “personal belief” and that he cannot take a stance on it as a district employee.

District officials deny that Latson made any such statements.

It was an emotional meeting, the mother said, one in which Latson told the mother that he felt she was accusing him of being an anti-Semite.

She told him he was wrong, that she didn’t believe he was anti-Semitic.

Let’s call this principal what he really is… A POLITICALLY CORRECT PANSY!

This is what is becoming of your schools America.

Educators are afraid to teach the truth because the truth is not always politically correct to every single person.

They are trying to please everyone, truth be damned.

In the process, they are alienating many.

By the way, According to Wikipedia: The population of Palm Beach County is 20% Jewish, which makes it by far the most Jewish county in the United States. “‘To find a more densely populated Jewish community, you’d have to go to Israel,’ says Richard Jacobs, vice president of community planning for the Boca-based Jewish Federation of South Palm Beach County.” Boca Raton, with a population of about 95,000, has 16 synagogues.

Principal William Latson has picked the wrong school district to endorse any form of Holocaust denial.