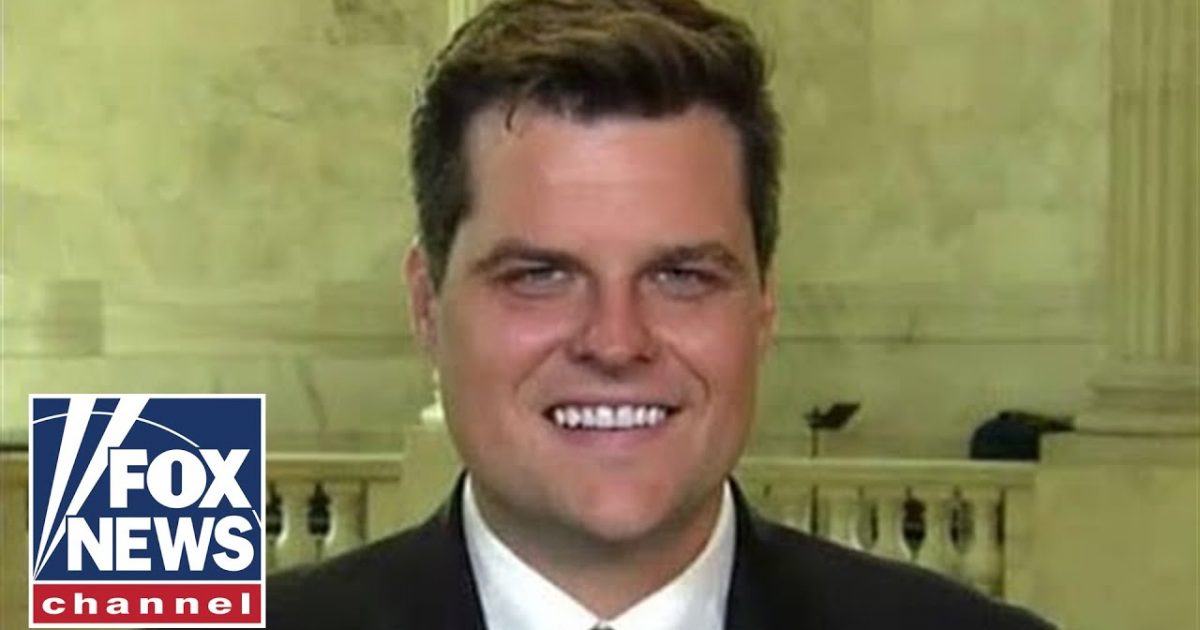 We’ve all heard the expressions; “Never wake a sleeping baby”; “Let sleeping dogs lie”; and, “Leave well enough alone”. It’s good advice; however, politicians don’t understand these simple, yet wise, statements. When it comes to policy and lawmaking, Republicans try to “outdo” Democrats and vice versa. Alexandria Ocasio-Cortez, Democrat freshman Congressman from New York, introduced the “Green New Deal” that outlined converting the united States to renewable energy sources, ditching fossil fuels entirely, and severely crippling the nation’s economy because we only have 12 years to “save the world” from the hoax of “climate change.” Not to be outdone, Republican Florida Congressman Matt Gaetz has developed his own resolution called the “Green Real Deal”.

Ocasio-Cortez unveiled her resolution on Feb. 7 and immediately faced criticism for its scope and potential cost, which reached toward tens of trillions of dollars.

A draft of Gaetz’s resolution, obtained by Politico, recognizes risks to the U.S. from climate change, citing Department of Defense reports that identify certain military assets and bases as at risk to rising sea levels and increasing severe weather events, such as hurricanes.

“Climate change creates new risks and exacerbates existing vulnerabilities in communities across the United States, presenting growing challenges to human health and safety, quality of life, and the rate of economic growth,” the draft says.

Energy lobbyists have seemingly received copies of Gaetz’s resolution are beginning to line up behind it in support.

“Congressman Gaetz deserves to be applauded for taking the lead in crafting a bold resolution that identifies actionable climate solutions that will benefit America’s economy, environment, and national security,” Heather Reams, executive director of Citizens for Responsible Energy Solutions, said in a statement.

The draft pledges “to reduce and modernize regulations so that clean energy technologies can be deployed, and compete.”

The united States has enough real problems to solve. Yet, there are members of Congress expending energy to develop legislation, unconstitutional legislation at that, directed at the contrived climate change hoax. With all the information available to disprove Al Gore’s “Church of Climate Change”, it appears no one in Congress is interested.

In 2015 article “Scientists Falsifying Data to Pander Global Warming“, the hoax of climate change, perpetrated by scientists and the United Nations, was documented. The Intergovernmental Panel on Climate Change (IPCC) admitted their computers “exaggerated” the intensity of climate change in 2013. The same year, scientists ridiculed the IPCC’s report as over-confident and suggested the IPCC be “put down”. Again, in 2017, the IPCC’s climate models were found to be “totally wrong”. Moreover, none of the IPCC climate models meet the standard of the Scientific Method, a standard for scientists to verify hypotheses and theories.

So, why are members of Congress peddling the “Green New Deal” and the “Green Real Deal”? They belong to the climate change church of Al Gore. Gaetz tweeted on March 12, 2019, “Climate change is real. Humans contribute.”

They admit large parts of the world were as warm as they are now for decades at a time between 950 and 1250 AD – centuries before the Industrial Revolution, and when the population and CO2 levels were both much lower.

Former U.S. Senator Timothy Wirth (D-CO), then representing the Clinton-Gore administration as U.S Undersecretary of State for global issues, addressing the same Rio Climate Summit audience, agreed: “We have got to ride the global warming issue. Even if the theory of global warming is wrong, we will be doing the right thing in terms of economic policy and environmental policy.” (Wirth now heads the UN Foundation which lobbies for hundreds of billions of U.S. taxpayer dollars to help underdeveloped countries fight climate change.)

Also speaking at the Rio conference, Deputy Assistant of State Richard Benedick, who then headed the policy divisions of the U.S. State Department said: “A global warming treaty [Kyoto] must be implemented even if there is no scientific evidence to back the [enhanced] greenhouse effect.”

In 1988, former Canadian Minister of the Environment Christine Stewart told editors and reporters of the Calgary Herald: “No matter if the science of global warming is all phony…climate change [provides] the greatest opportunity to bring about justice and equality in the world.”

In 1996, former Soviet Union President Mikhail Gorbachevemphasized the importance of using climate alarmism to advance socialist Marxist objectives: “The threat of environmental crisis will be the international disaster key to unlock the New World Order.”

Speaking at the 2000 UN Conference on Climate Change in the Hague, former President Jacques Chirac of France explained why the IPCC’s climate initiative supported a key Western European Kyoto Protocol objective: “For the first time, humanity is instituting a genuine instrument of global governance, one that should find a place within the World Environmental Organization which France and the European Union would like to see established.”

It doesn’t take an expert on climate or an expert on government to understand the motive of politicians to embrace the hoax of climate change when enough research and information is available to debunk climate change and man’s contribution to it. It’s called fleecing the public of more money for their unconstitutional and frivolous spending.

According to The Daily Caller:

In contrast to the Green New Deal, the draft Green Real Deal resolution takes a positive view on nuclear energy. Ocasio-Cortez’s resolution did not mention the energy sector, causing some controversy among pro-nuclear energy experts.

The resolution pledges to “empower individuals, states, and the marketplace” to develop and disseminate new technology that will cut the United States’ carbon emissions.

Whoever came up with the lie that nuclear energy production is “clean energy”? Politicians and environmentalists alike fail to account for the radioactive waste generated that takes hundreds or thousands of years to dissipate nor where that waste is to be stored. Moreover, one mistake by an individual at a nuclear power plant results in an accident like Three Mile Island or Chernobyl or Fukushima. Chernobyl has already had one sarcophagus replaced and in about 20 or so years, will need another replacement – that will continue until the waste is spent. There is no humanly way possible to clean up Fukushima, which continues to “pollute” the globe with radiation and radioactive waste and will for years to come.

How many people would be thrilled to have a nuclear energy power plant in their town or backyard? Not many.

While politicians should be versed in the issues, it is painfully obvious they care not to read all the research; and, neither does their staff. No one read the Obamacare legislation before it was passed, proving they care little about inflicting disastrous legislation upon the public. Money talks and those who can grease the palms of politicians get their agenda promoted and legislation passed related to that agenda regardless of constitutionality or adverse effect upon the people.

Another thing that appears to be occurring is some type of tit-for-tat contest between Democrats and Republicans to see who can out “socialism” the other, the people be damned. Just as Republicans refused to repeal Obamacare, choosing to replace it with their version of government controlled health care insurance, the same is happening with the “Green New Deal”. This proves that both parties are complicit with a socialist agenda, ignore the Constitution, and fail in properly representing the people. Our “representatives” in the House and members of the Senate are operating as though the people work for them instead of the other way around.

These elected officials are not making decisions based on the scientific evidence that climate change is a hoax or even considering the data as inconclusive. Instead, they embrace the UN IPCC “junk” science to rob citizens of more of their money for their own purposes, which aligns with the globalist agenda of one world government and wealth redistribution. The willingness of both chambers of Congress to develop and possibly pass legislation based on partial information, inconclusive information or false information is negligent, irresponsible, incompetent, ignorant, self-serving and aggrandizing.

It demonstrates that both chambers of Congress consist of a majority who are anti-constitutionalists hell-bent on shafting the people. Republicans may not go along with AOC’s ridiculous plan, but they will their own waiting in the wings should the “Green New Deal” fail to launch. With either plan, the people lose while the politicians win. It further cements the idea that every State should have recall procedures against Representatives and Senators who fail or refuse to adhere to their oath of office, the Constitution, and support any ideology anathema to the founding of the united States.