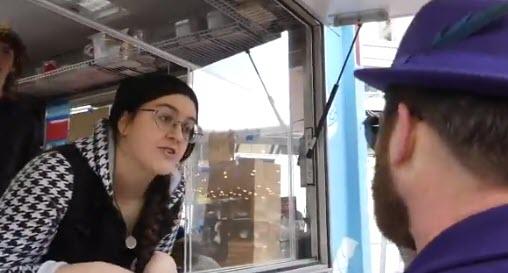 In the America of today social justice warriors virtue signaling their tolerance for others have been repeatedly and quite often exposed for the bigots, sexists, and racists that they really are.

Take, for example, the following video provided by Brandon Farley via his Twitter page, in which a food cart lady parked at the PDX Women’s March in the hyper-tolerant city of Portland this past weekend refused service to an individual requesting a meal reportedly based on the fact that he is a male.

Tolerance at its finest.

You won’t see this one in the mainstream media because it doesn’t fit the narrative.

Misandrists – or man haters – are not vilified or abhorred like a teenage kid with a red hat smiling during the drumming of a traditional Native America tune, but rather, are defended and raised to 15-minute celebrity status among the very peers who call for death sentences against anyone who disagrees with their oft extreme and skewed personal belief systems.

This, right here, is the hypocrisy of the modern day social justice warrior, and though we don’t see the complete incident because the preceding moments have not been made available, it sure does appear to be a case of refusal of service based on a bias on the part of the lady working the cart:

If we’re not mistaken, it is against Federal Law to discriminate against a person because of their race or sex.