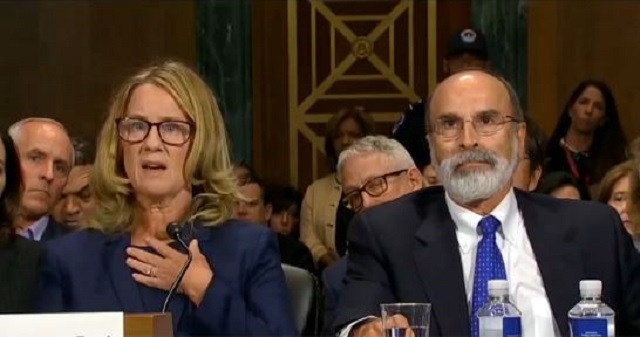 Christine Blasey Ford’s ex-boyfriend shared a written declaration Tuesday stating Ford never expressed a fear of flight — even while aboard a propeller plane — had no problem living in a tiny apartment with only one door and helped her best friend prepare for a potential polygraph test, despite claiming under oath she has done no such thing.

Ford’s ex also said she cheated on him and a year after they broke up she charged his credit card for $600 worth of merchandise.

“When confronted, Dr. Ford said she did not use the card, but later admitted to the use after I threatened to involve fraud prevention,” her ex’s letter says.

In a written declaration released Tuesday and obtained by Fox News, an ex-boyfriend of Christine Blasey Ford, the California professor accusing Brett Kavanaugh of sexual assault, directly contradicts her testimony under oath last week that she had never helped anyone prepare for a polygraph examination.

The former boyfriend, whose name was redacted in the declaration, also said Ford neither mentioned Kavanaugh nor mentioned she was a victim of sexual misconduct during the time they were dating from about 1992 to 1998. He said he saw Ford going to great lengths to help a woman he believed was her “life-long best friend” prepare for a potential polygraph test. He added that the woman had been interviewing for jobs with the FBI and U.S. Attorney’s office.

He further claimed that Ford never voiced any fear of flying (even while aboard a propeller plane) and seemingly had no problem living in a “very small,” 500 sq. ft. apartment with one door — apparently contradicting her claims that she could not testify promptly in D.C. because she felt uncomfortable traveling on planes, as well as her suggestion that her memories of Kavanuagh’s alleged assault prompted her to feel unsafe living in a closed space or one without a second front door.

Ford “never expressed a fear of closed quarters, tight spaces, or places with only one exit,” the former boyfriend wrote. However, on Thursday, Ford testified, “I was hoping to avoid getting on an airplane. But I eventually was able to get up the gumption with the help of some friends and get on the plane.” She also acknowledged regularly — and, in her words, “unfortunately” — traveling on planes for work and hobbies.

And Ford explicitly told Sen. Dianne Feinstein, D-Calif., on Thursday that she had a second front door installed in her home because of “anxiety, phobia and PTSD-like symptoms” that she purportedly suffered in the wake of Kavanaugh’s alleged attack at a house party in the 1980s — “more [specifically], claustrophobia, panic and that type of thing.”

[…]Under questioning from experienced sex-crimes prosecutor Rachel Mitchell last week, Ford said that she had “never” had “any discussions with anyone … on how to take a polygraph” or “given any tips or advice to anyone who was looking to take a polygraph test.” She repeatedly said the process was stressful and uncomfortable.

But in his declaration, the ex-boyfriend wrote that, “I witnessed Dr. Ford help [Monica L.] McLean prepare for a potential polygraph exam” and that Ford had “explained in detail what to expect, how polygraphs worked and helped [her] become familiar and less nervous about the exam,” using her background in psychology.

Finally, someone who actually knows her has spoken out! Her entire family has been silent!

I still cannot believe they got away with this answer.

QUESTION: Why did your best friend say she never met Kavanaugh & the party did not happen?

Dr. Ford (literally): "Leland has significant health challenges, and I am happy that she is focusing on herself"

Investigative journalist Paul Sperry reported Tuesday that renovation records undermine Ford’s story about when and why she installed a second door in her expensive Palo Alto home:

Ford testified last week that she had never revealed the details of the alleged attack until 2012, when she was in couples therapy with her husband. She said the memories percolated up as they revisited a disagreement they’d had over her insistence on installing a “second front door” when they had remodeled their Palo Alto, Calif., home.

The need to explain a decision her husband “didn’t understand,” Ford testified, pushed her to say she wanted the door to alleviate symptoms of “claustrophobia” and “panic attacks” she still suffered from an attempted rape allegedly perpetrated by Kavanaugh in high school during the early 1980s.

“Is that the reason for the second door — front door — is claustrophobia?” asked Sen. Dianne Feinstein, the top Democrat on the Judiciary Committee. “Correct,” Ford replied.

Ford never specified when the renovation took place, leaving a possible impression that it and the therapy session happened around the same time.

But documents reveal the door was installed years before as part of an addition, and has been used by renters and even a marriage counseling business.

“The door was not an escape route but an entrance route,” said an attorney familiar with the ongoing congressional investigation. “It appears the real plan for the second front door was to rent out a separate room.” […]Palo Alto city records show that a building permit for an additional room and exterior door was issued to Ford and her husband on Feb. 4, 2008 — more than four years before the May 2012 therapy session where, she says, she first identified Kavanaugh as her attacker.

All the remodeling, including a new bathroom, was completed by February 2010. The only additional permits issued to Ford at her Palo Alto address are for “solar panels” on the roof, a “solar hot water system” in the garage, and an “electric vehicle charge station” for the driveway — all of which were issued after 2012.

Other documents, including health care-provider registration records, reveal that a marriage counselor listed Ford’s home address as her place of employment, ostensibly using the extra room and door for her clinical practice. That marriage therapist, Sylvia Adkins Randall, sold the home to the Fords in 2007, but continued to maintain the address for her business.

Contacted by phone, Dr. Randall expressed concern about her real estate transaction and prior relationship with Ford being reported.

Randall is a licensed therapist who specializes in treating “disturbing memories from the past.” She supports Ford and described her allegation against Kavanaugh as “credible.”

Since the second front door was installed, moreover, students from local colleges have lived in the additional room with the private door. In fact, under congressional questioning Thursday, Ford testified she has “hosted” various other residents there, including “Google interns.”

The attorney said the tenants call into question Ford’s claims about why she installed the additional exterior door in her home.

“Renters and a business operating out of Dr. Ford’s home would explain the added door,” he said. “Clearly, there were business purposes [for it], not just ones related to her anxieties.”

Also casting doubt on Ford’s story is the fact she installed no such escape door at a second home, which property records show she and her husband own in Santa Cruz, Calif., less than five blocks from the beach.

Trump was absolutely right to mock Ford’s ridiculous testimony on Tuesday and all the evidence bears this out.

End this charade immediately and confirm Judge Brett Kavanaugh to the Supreme Court!