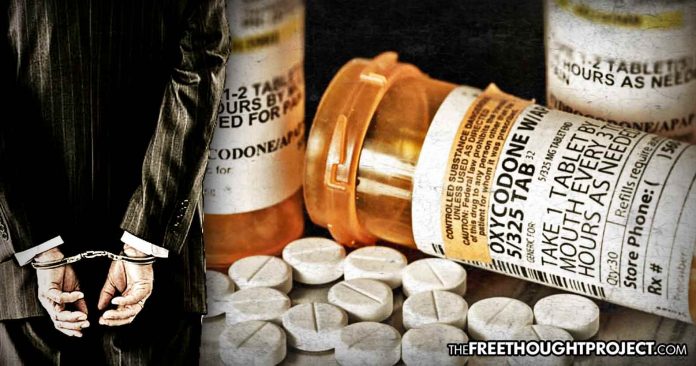 From the Sackler family — who has made billions from selling opioids to the masses — to the doctors arrested for pushing their pills on unwilling Americans, lawsuits and charges in the opioid crisis abound. However, the companies responsible for distribution of these drugs have largely gone on unscathed, until now.

In a first in the government’s battle against the opioid crisis, the former CEO of one of the largest opioid distribution companies in the country, Rochester Drug Cooperative, and the company itself have been criminally charged with conspiracy.

The U.S. Attorney’s Office for the Southern District of New York charged Rochester Drug Cooperative (RDC), one of the country’s largest distributors of opioids, with “knowingly and intentionally” violating federal narcotics laws “by distributing dangerous, highly addictive opioids to pharmacy customers that it knew were being sold and used illicitly,” according to a press release, as reported by ABC.

Doud, according to the charges, distributed tens of miillions of oxycodone, fentanyl, and other opioids, knowing there was no legitimate need for them.

“Today’s charges should send shock waves throughout the pharmaceutical industry reminding them of their role as gatekeepers of prescription medication,” DEA Special Agent in Charge Ray Donovan said in a statement. “DEA investigates DEA Registrants who divert controlled pharmaceutical medication into the wrong hands for the wrong reason. This historic investigation unveiled a criminal element of denial in RDC’s compliance practices, and holds them accountable for their egregious non-compliance according to the law.”

With all the “shock waves” created by the charges, RDC agreed to non-prosecution consent and will pay a fine of $20 million. As for Doud, who was led away in handcuffs on Tuesday, he faces up to 10 years if convicted.

While many folks might see this as some sort of victory, arresting people to solve a drug problem has never worked. The United States has constantly kidnapped and caged people for selling various substances it deemed illegal, which has created the opposite scenario of the intended outcome.

Instead of deterring drug use, it’s been expanding, getting worse, and drugs have become more available and more dangerous.

This is not to say that companies like RDC shouldn’t bear some of the responsibility for helping to create this opioid crisis. However, what led us into these dark times was trust in a system rife with corruption and ill will.

The government making drugs illegal does absolutely nothing when a person puts blind trust in a medical establishment who then deliberately addicts them to opioids to make billions. Even when it’s illegal, after these people have been duped into their addictions, they still seek it out. This is why we see soccer moms over dosing on dangerous black market fentanyl in front of Hobby Lobby.

The answer lies in legalization and information — not government violence and prohibition. Had these soccer moms and college kids who were duped into believing 100 oxycodone pills, with 5 refills, was needed for a sprained ankle, actually questioned the medical establishment, the likelihood of this opioid crisis ever existing is reduced — and it has nothing to do with whether or not the state says it is legal.

The fact is that some people are freely allowed to market potentially deadly drugs, while others are thrown in a cage for the same activity. This highlights the notion that not all people are equal in the eyes of the state or the law. If you are rich and wear a white jacket and push dangerous drugs on people who don’t need them, you were just fine. However, if you sold a plant, like cannabis, to a willing customer, without the approval of the state, you are a dangerous criminal who needs to be kidnapped, caged, or killed.

It is this utter lack of logic, blind trust in the establishment, and egregious application of state force which has created this opioid crisis in the first place. Continuing to apply these same tactics will only make this problem worse.

Government violence has not and never will be able to stop the sale and use of substances deemed illegal by the state. Granting monopolies on the sale of these drugs to “trusted” sources like the medical industry hasn’t curbed their use either — it’s only created monopolies in the criminal world too. And both the illegal and legal monopolies are thriving thanks to the state.

To be clear, no one here is advocating that the US end the drug war and then start promoting drugs. In fact, if government simply spent a tiny fraction of the money it spends on enforcing the drug war, on educating children, and health and treatment programs instead police action via the drug war, the results would be incredible.

The evidence is there and some states are already considering it. Last year, as TFTP reported, Oregon proposed legislation to decriminalize all drugs, including heroin, cocaine, meth, and ecstasy—because they can see how throwing people in cages for these substances only makes things worse.

Sadly, however, there are far too many people in high places who profit from the prohibition of these substances. The crime created by the drug war is used to justify the need to constantly grow police departments across the country. The drug war has allowed police departments the ability to steal property from otherwise innocent people, making themselves rich in the process.

The illegal drug trade is also used to warrant spending massive amounts of money on people and equipment in the government which do nothing to curb drug use but do everything to oppress citizens. Case in point: the current opioid crisis’ existence in spite of the largest police state in US history.

Unfortunately, neither the left nor the right is able to see this and take proper action. Until we overcome this massive hurdle of state and corporate sponsored prohibition, we can expect to see more soccer moms overdosing in Walmart parking lots and more pharmaceutical companies pushing opioid products.

Indeed, this is already happening. The Sackler family — whose made billions hooking Americans on opioids — already has and FDA-approved cure for the crisis they helped to create, which happens to be manufactured from, you guessed it, more opioids.